Evaluation of the Oh, Dubois and IEM Backscatter Models Using a Large Dataset of SAR Data and Experimental Soil Measurements
Next Article in Special Issue

Impact of Volcanic Eruptions on the Occurrence of PAHs Compounds in the Aquatic Ecosystem of the Southern Part of West Spitsbergen (Hornsund Fjord, Svalbard)
Previous Article in Special Issue

Groundwater Governance and the Growth of Center Pivot Irrigation in Cimarron County, OK and Union County, NM: Implications for Community Vulnerability to Drought

Cimarron County, Oklahoma and Union County, New Mexico, neighboring counties in the Southern High Plains, are part of a vital agricultural region in the United States. This region experiences extended periods of cyclical drought threatening its ability to produce, creating an incentive for extensive center pivot irrigation (CPI). Center pivots draw from the rapidly depleting High Plains Aquifer System. As a result, the prospect of long-term sustainability for these agricultural communities is questionable. We use Remote Sensing and Geographic Information Systems to quantify growth in land irrigated by CPI between the 1950s and 2014, and key informant interviews to explore local perspectives on the causes and impact of such growth. In Cimarron County, OK, CPI increased by the mid-1980s, and has continually increased since. Results suggest adaptation to drought, a depleting aquifer, high corn prices, and less rigid groundwater regulations contribute to CPI growth. Conversely, CPI in Union County, NM, increased until 2010, and then declined. Results also suggest that drought-related agricultural changes and more aggressive well drilling regulations contribute to this decrease. Nevertheless, in both counties, there is a growing concern over the depleting aquifer, the long-term sustainability of CPI, and the region’s economic future. View Full-Text
Keywords: drought; center pivot irrigation; governance; High Plains Aquifer; vulnerability-resilience drought; center pivot irrigation; governance; High Plains Aquifer; vulnerability-resilience
►▼ Show Figures 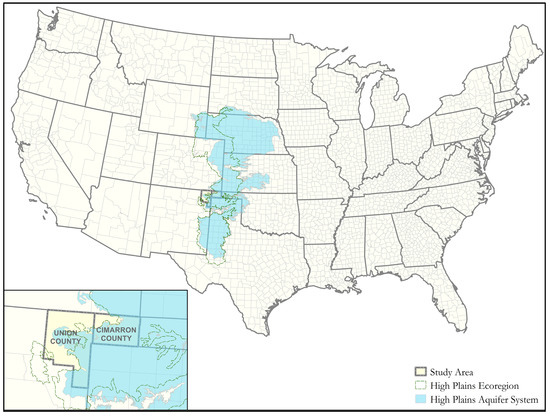