Artificial reefs are considered one of the alternative methods in fisheries management, used in order to enhance stocks and marine biodiversity in general. A number of biotic and abiotic parameters influence the fouling communities’ formation on artificial reefs through complex interactions. In order to understand how epibiotic or fouling communities progress through time, it is important to study these communities in mature artificial reefs, especially those that have been around for many decades, or in some cases, millennia. This study was conducted on the coral and other fouling organisms of two accidental artificial reefs (40 to 70 year-old shipwrecks) in Cyprus (Levantine Sea). The thermal and nutrient annual regime of the study sites were characterized by processing satellite data. The results indicate that the wrecks are normally under warm and oligotrophic conditions. Percentage coverage of corals and other organisms on the wrecks was calculated (image-analysis software) on photos taken in 2010 (two wrecks) and again in 2016 (one wreck) of the fouling communities. Sponges were the organisms with the highest percent cover (~27%) at the two wrecks. Four scleractinian coral species were found (7%–19% total coral cover). The oldest wreck, which has well-developed coral communities, was revisited during fieldwork in a near-by area in 2016. Only two major benthic categories (dead coral and macro algae) changed significantly between sampling periods. Given the actual policies to sink wrecks to create artificial reefs and the diverse environmental conditions in different areas that will inevitably influence fouling, it is important to carry out studies relating to mature artificial reefs/wrecks in order to be able to assess the ecological effectiveness of longstanding artificial reefs. View Full-Text
Keywords: artificial reefs; shipwrecks; fouling communities; benthic cover; corals; Cyprus artificial reefs; shipwrecks; fouling communities; benthic cover; corals; Cyprus
►▼ Show Figures 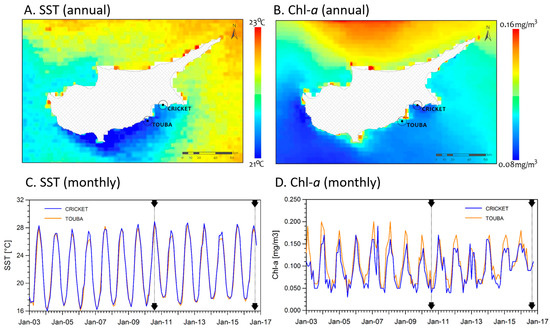