Urban Evolution: The Role of Water

The structure, function, and services of urban ecosystems evolve over time scales from seconds to centuries as Earth’s population grows, infrastructure ages, and sociopolitical values alter them. In order to systematically study changes over time, the concept of “urban evolution” was proposed. It allows urban planning, management, and restoration to move beyond reactive management to predictive management based on past observations of consistent patterns. Here, we define and review a glossary of core concepts for studying urban evolution, which includes the mechanisms of urban selective pressure and urban adaptation. Urban selective pressure is an environmental or societal driver contributing to urban adaptation. Urban adaptation is the sequential process by which an urban structure, function, or services becomes more fitted to its changing environment or human choices. The role of water is vital to driving urban evolution as demonstrated by historical changes in drainage, sewage flows, hydrologic pulses, and long-term chemistry. In the current paper, we show how hydrologic traits evolve across successive generations of urban ecosystems via shifts in selective pressures and adaptations over time. We explore multiple empirical examples including evolving: (1) urban drainage from stream burial to stormwater management; (2) sewage flows and water quality in response to wastewater treatment; (3) amplification of hydrologic pulses due to the interaction between urbanization and climate variability; and (4) salinization and alkalinization of fresh water due to human inputs and accelerated weathering. Finally, we propose a new conceptual model for the evolution of urban waters from the Industrial Revolution to the present day based on empirical trends and historical information. Ultimately, we propose that water itself is a critical driver of urban evolution that forces urban adaptation, which transforms the structure, function, and services of urban landscapes, waterways, and civilizations over time. View Full-Text
Keywords: urban watershed continuum; urban karst; urban succession; urban adaptation; transitional ecosystems; convergent urban evolution; urban calcium cycle urban watershed continuum; urban karst; urban succession; urban adaptation; transitional ecosystems; convergent urban evolution; urban calcium cycle
►▼ Show Figures 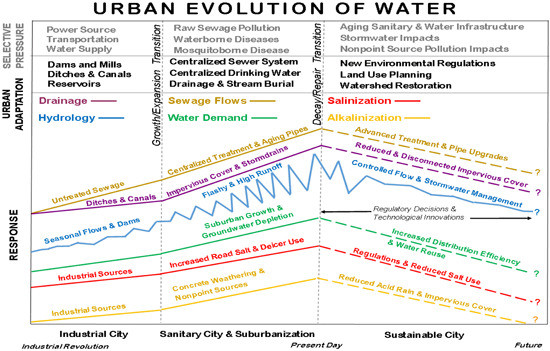