Water shortage is severe in the North China Plain (NCP). In addition to a deficiency of water resources, deterioration of groundwater quality should be of great concern. In this study, hydrogeological analysis was conducted in combination with principal component analysis, correlation analysis and the co-kriging method to identify factors controlling the content of major ions and total dissolved solids (TDS) in areal shallow and deep groundwater and to assess groundwater evolution in Cangzhou, China. The results suggested that groundwater quality degradation occurred and developed in the study area, as indicated by increasing concentrations of major ions, TDS and hardness in both shallow and deep groundwater. In shallow groundwater, whose hydrochemical water types changed from HCO3–Ca.Na.Mg and HCO3.Cl–Na in the west (Zone II) to Cl.SO4–Na and Cl–Na in the east (Zone III). Areas with TDS concentrations between 1500 and 2000 mg/L occupied 79.76% of the total in the 1980s, while areas with a TDS concentration ranging from 2500 to 3000 mg/L comprised 59.11% of the total in the 2010s. In deep groundwater, the area with TDS over 1000 mg/L expanded from 5366.39 km2 in the 1960s to 7183.52 km2 in the 2010s. Natural processes (water-rock interactions) and anthropogenic activities (groundwater exploitation) were the dominant factors controlling the major ions’ content in local groundwater. Dissolution of dolomite, calcite, feldspar and gypsum were the primary sources of major ions in groundwater, and the ion exchange reaction had a strong effect on the cation content, especially for deep groundwater. View Full-Text
Keywords: groundwater quality; total dissolved solids; salinization; hydrochemical facies; North China Plain groundwater quality; total dissolved solids; salinization; hydrochemical facies; North China Plain
►▼ Show Figures 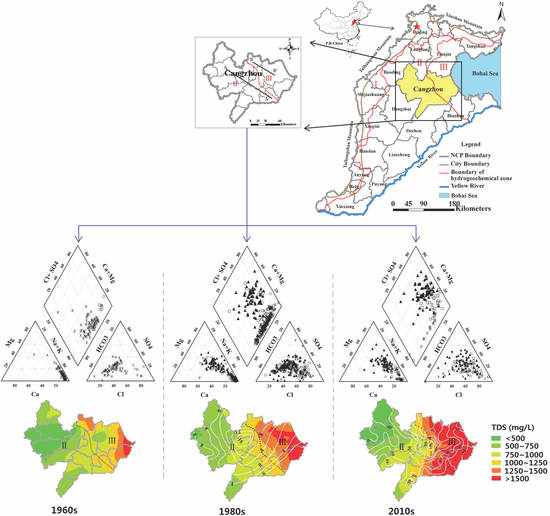