The aim of this study is to evaluate seasonal enhancement of nitrogen removal on domestic wastewater treatment performance by partially saturated and saturated HBCWs. To achieve this, two HBCWs consisting of a vertical subsurface flow constructed wetland, followed by a horizontal subsurface flow constructed wetland (VSSF-HSSF) were evaluated. Two saturation levels were used: (a) partially saturated HB1:VSSF1 (0.6 m)-HSSF1 (0.15 m), (b) saturated HB2: VSSF2 (0.8 m)-HSSF2 (0.25 m). Each unit was planted with Schoenoplectus californicus and was operated for 297 days. The removal efficiencies in HB1 and HB2 were above 70%, 86%, 77% and 55% for chemical oxygen demand (COD), total suspended solids (TSS), nitrogen as ammonium (NH4+-N), and total nitrogen (TN), respectively. For VSSF, a higher level of saturation (from 0.6 to 0.8 m) meant a decrease of 17% in the TN removal efficiencies, and for HSSF, an increase from 0.15 to 0.25 m of saturation meant a decrease of 11 and 10% in the NH4+-N and TN removal efficiencies, respectively. Thus, the increase of saturation level in HBCWs reduces the transformation and/or removal of components of the wastewaters to be treated, particularly nitrogen. Through this research, the possibility of optimizing the transformation of nitrogen with partially saturated hybrids can be examined. View Full-Text
Keywords: hybrid constructed wetland; saturation level; organic matter; ammonia hybrid constructed wetland; saturation level; organic matter; ammonia
►▼ Show Figures 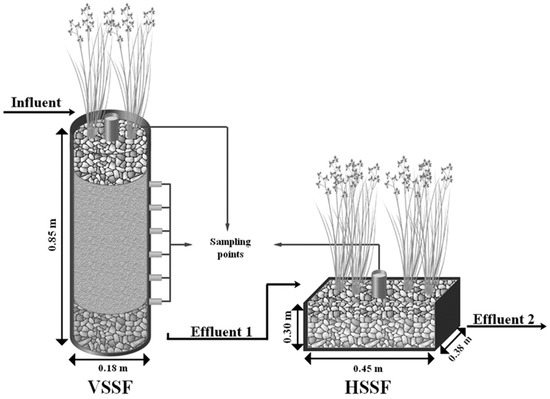