:
The study aims to present and analyze the rate of changes that occur in the area of Wołosate bog dome as a result of human pressure, which has been especially intense the period between 1967–2016. Additionally, the work presents current stratigraphic cross-section of the peat deposit, and illustrates and interprets the course of the peat accumulation process, that depends on hydrological conditions. The described study had been conducted on the area of “Wołosate” raised bog (nature reserve) in Western Bieszczady Mountains. From the analysis of data obtained from precise satellite surveys, it can be concluded that over 49 years, the average thickness of peat in the characteristic levelling-stratigraphic cross-section decreased by 27.2%. The most significant changes (34.3%) took place up until 1988, as during that period, the stream valley of Wołosatka river had been drained. The results of the discussed study indicate one more circumstance. In later period (1988–2016), following the restoration measures, a 35 cm acrotelm layer of Sphagnum peat (Eusphagneti) with a living layer of peat moss which happened to form itself on the western side of the peatland (along a section of approx. 50 m).
Keywords:
peatland disappearance; stratigraphic profile; peat species; valley drainage; restoration; topographic surveys

Despite significant efforts that have been taken by numerous scientists around the world, during the previous century, plans to prevent the degradation of peatlands did not succeed. The main cause of degradation was draining peatlands in order to introduce land use changes. However, as in time it turned out that degradation of these ecosystems is a cause of about 5–10% of whole annual carbon dioxide emissions, the restoration of disturbed and degraded peatlands became one of the priorities worldwide [1,2,3]. As reported by Loisel and Galleo-Sala [2], both duration as well as intensity of drainage impact the characteristics that may in the end be decisive with regards to whether the renovation would turn out a success or not. Although restoration may not always make it possible for the degraded land to return to a state in which all ecosystem services are retrieved, we need to take steps to support peatland restoration. One of several ways to restore peatlands is to re-irrigate them quickly [4,5].
As all services and functions of peatland ecosystems cannot be easily restored, it should also be remembered to protect intact peatlands. This is particularly important due to crucial role of peat bogs in mitigating climate change and extreme weather phenomena [6,7,8].
In Poland, despite the significant impact of human pressure on the natural environment, some peatlands of a high valorization degree have been still preserved in their natural or near-natural state. According to Tobolski [9], “they can be referred to as a multi-thematic phenomenon distinguished by its outstanding cognitive value, which serves a major environmental and creative role”. This group includes, for example, a raised bog complex in the Orawa and Nowy Targ Valley [10,11], and some raised bogs in the Western Bieszczady Mountains [12,13,14].
Due to the impact of human pressure, peatlands’ area and thickness decrease over the years and, therefore, they are being a subject to the process of decline. With a view to this, research into magnitude and rate of peatland decline is highly purposeful and advisable, as its results motivate to restore and protect these wetlands of significant natural value. The disappearance of peatlands due to drainage (decession) is mainly caused by three factors: settlement (the so-called compression), peat shrinkage, and the organic matter oxidation [15,16,17]. Findings and the literature on the subject matter have been extensively presented in numerous publications by e.g., Ilnicki [18,19]; Ilnicki and Szajdak [20]; Lipka [21,22]; Lipka et al. [23,24,25]; Egglesman [26]; Okruszko [27]; Kasimir-Klemedtsson [28]; Deverel et al. [29], Waddington [30], Hutchinson [31] and Glina at al. [32]. All of these publications unanimously indicated that the peatland disappearance was mainly due to their drainage.
The main aim of the study was to analyze the changes caused by human pressure during the period 1967–2016 in the dome cross-section of the “Wołosate” raised bog located in Western Bieszczady Mountains. Moreover, it was to present the peat deposit stratigraphy on the background of the hydrological conditions at the time when individual peat species were being formed.

The study demonstrated that the peatland dome has been successively lowering. The data on peat thickness at measuring points on the characteristic stratigraphic A-B transect of the bog dome (a study period of 1967–2016) are presented in Table 1.
The change in the average peat thickness on the A-B transect (Table 1 and Figure 3, in relation to the beginning of the studied period in 1967, is, respectively: 1980 (−10.6%), 1988 (−34.3%), 2016 (−27.2%). Detailed analyses of the data for individual analyzed periods showed that in the years was recorded:

It follows that the greatest lowering of the peatland surface occurred in 1980–1988 by −6.5 cm/year. Such a rapid subsidence of the peatland surface was caused by the fact that 21 years earlier, the drainage of the entire Wołosatka stream valley had started. However, at the beginning of the 1990s, the Bieszczady National Park began the process of renaturation of the Wołosatka stream valley. As a result, the degradation process of the Wołosate bog was stopped, mainly in its western part, where at the core control points (core number 2–5) an increase in peat thickness from 17 to 78 cm was noted. Changes in peat thickness throughout the analyzed period of 49 years (1967–2016) are also graphically presented on the transect of the peat dome (Figure 3).
It is evident that compared to 1967, changes in the average peat thickness are unfavourable. A higher transect layer can only be observed on the western side, over a length of approx. 50 m. A similar situation occurs on a section of approx. 130 m (the western side) but only in relation to 1988. It can be assumed that this is the effect of restoration measures taken by the Bieszczady National Park.
On the other hand, radically adverse changes took place on the studied transect (along a length of approx. 75 m, on its eastern side); this is illustrated by Table 1 and Figure 3.
Figure 4 presents characteristic stratigraphic cross-section through “Wołosate” raised bog, developed on the basis of research in 2016 supplemented with data from the works of [12,36].
The dominant factor that affects the stratigraphic structure of peat deposits is the hydrographic conditions, and this changed during the analyzed period. The average annual level of groundwater at the top of the peat dome was 0.10m, while in the lower parts it was 0.21m. In the remaining research periods, the average groundwater level was, respectively: 0.28 m (0.10 m–0.48 m) in 1980, 0.35 m (0.12 m–0.57 m) in 1988, 0.21 m (0.00 m–0.42 m) in 2016.
According to the classification proposed by Lipka and Zając [11], the course of the dynamic curve of the characteristic core transect shows that the Holocene “Wołosate” raised bog was mainly formed under the water management conditions of the ombrogenic nature, along with a progressive rise in the groundwater level, with periodic oscillations of its position. This aquatic environment promoted the accumulation of cottongrass and Sphagnum peat (Eriophoro-Sphagneti), which is the dominant species in the studied peat deposit.
The uppermost layer of the “Wołosate” raised bog dome is mainly comprised of Sphagnum peat (Eusphagneti), which was developing in an ombrogenic aquatic environment but already with a lowering groundwater level. At the same time, the characteristic hummock-hollow complex developed.
On the other hand, on the eastern side, two peat species were distinguished on the clay substrate in the bottom layer (Figure 4). Peat, with a considerable decomposition degree (R > 60%), of the woody type (most probably of the fen peat), as remains of wood and bark (Alnus glutinasa) were found, and of the Sphagnum and sedge (Sphagno-Cariceti) type. In this case, the initial phase of peat formation was affected by short-term river flooding, the permanent groundwater inflow, and the underground flow.
Studies on the vegetation cover carried out on the fen have shown that Ledo-Sphagnetum magellanici occurs in the central part of the fen dome. The moss layer with numerous sphagnum species is very well developed: Sphagnum magellanicum, Sphagnum rubellum, and brown moss, Aulacomnium palustre. The Ledum palustre marsh can also be found. There are also species suitable for the bog forest, such as Vaccinium uliginosum, Vaccinium myrtillus and Picea abies [43,51]. The average age of trees along the A-B transect is about 30 years. The youngest tree is 15 years old, and the scariest tree is 68 years old. The oldest trees occur mainly in the central part of the peat dome. The tallest trees are about 12 m tall and their vitality is 1/2, while the shorter trees (about 1.5 m) have a vitality of 1. Thus, the vitality of young trees decreases.

This research was created as part of the statutory research of the Department of Land Surveying, University of Agriculture in Kraków, No. 030003-D018. 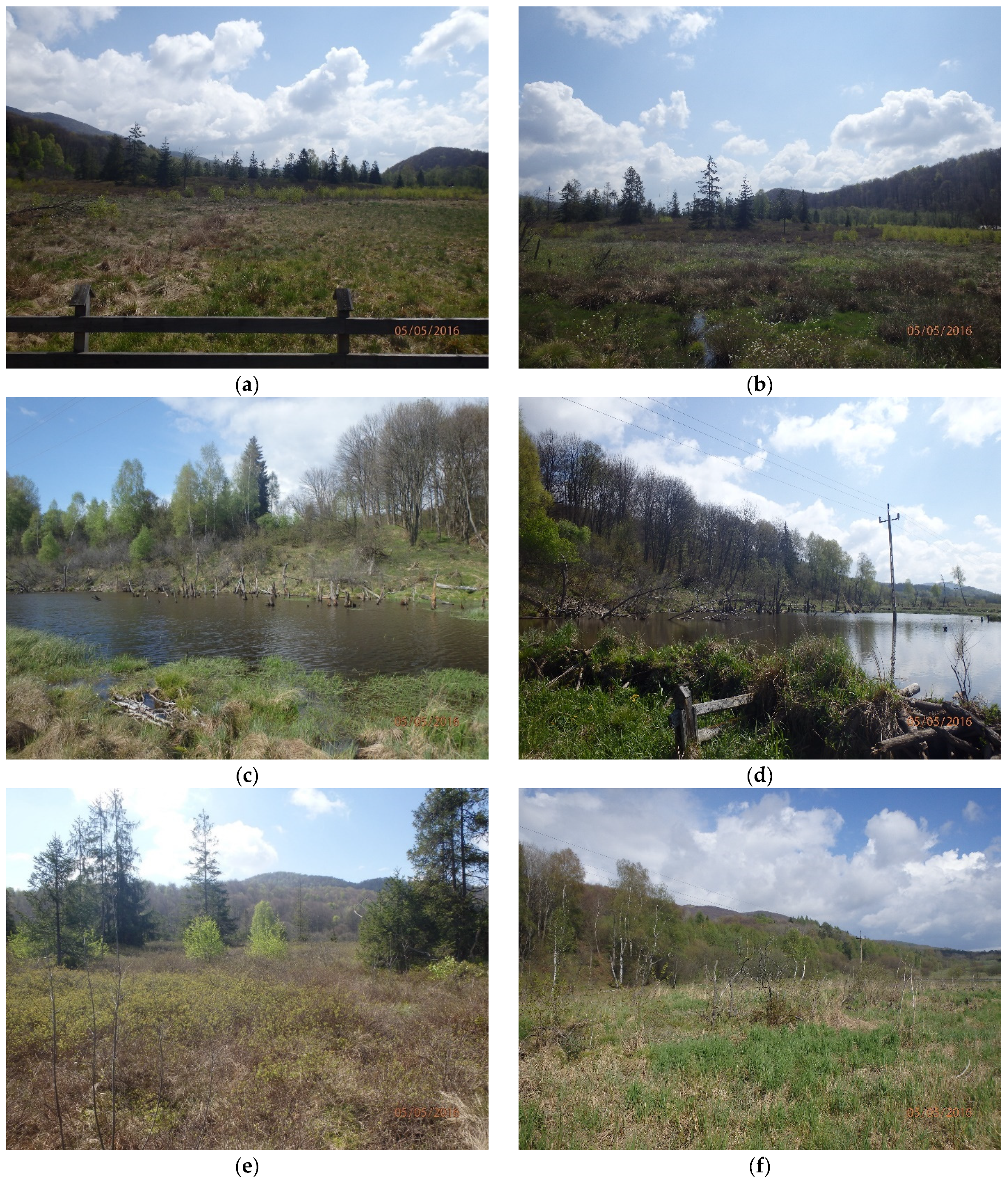