The Ability of a Bacterial Strain to Remove a Phenolic Structure as an Approach to Pulp and Paper Mill Wastewater Treatment: Optimization by Experimental Design

:
High-colored wastewater generated during the cellulose bleaching process causes the inhibition of biological activity when released into the environment. This study aimed to evaluate the bacterium’s capacity, identified as RGM2262, to degrade a complex phenolic structure such as lignin, which is found in high concentrations in the effluents generated during the production of cellulose, raw material for the manufacture of paper. To determine the values of the experimental variables that allow for a greater degradation of organic matter, an experimental model was carried out through experimental design. Thus, the experimental matrix was obtained with the variables pH 7 (−1) to 9 (+1) and a treatment time of 1 day (−1) to 5 days (+1). The results show that, at pH 8 and pH 9, both treatments—with bacteria in bio-films and without bio-films—were efficient. On the second day of treatment, 100% of the color and the phenolic structure were removed, with a similar rate constant, and at the same time, 80% COD and 70% of TOC, respectively.
Keywords:
phenolic compounds; pulp and paper industry; pollution control; wastewater cleaning; water sustainability

The residual phenolic compounds in the pulp and paper process generate highly colored wastewater, which causes biological activity inhibition when released into the environment, producing harmful environmental effects [1]. Phenolic compounds detected in sediments in a pulp industry effluent discharge zone have a direct relationship with the hormonal changes in the species that inhabit the area due to the continued exposure to these compounds [2]. The toxicity of cellulose effluent has several effects on the reproductive system in aquatic flora and fauna, such as a reduction in the size of the gonads, a change in the secondary sexual character, late maturity, and the suppression of the sex hormone in fish [3]. Therefore, alternatives for reducing the organic matter before its discharge into the environment, or for its reuse in the industrial process, are studied [4,5,6,7,8,9,10,11]. However, these processes fail to transform the compounds into more bioavailable organic matter; they only concentrate the organic matter that must be deposited in a landfill later, which indicates that the contamination is not eliminated but rather only transferred from one place to another. Lately, the use of microorganisms has been a promising alternative for cleaning contaminated environments in the so-called bioremediation processes; thus, the use of several and varied bacterial strains for degrading different pollutants has been tested. Some researchers have isolated bacteria from contaminated effluents that have the potential for use in bioremediation—for example, studied strains resistant to high concentrations of phenol, which would be an excellent bacterium to treat wastewater containing refractory organic matter [12,13]. The behavior of co-culture in the degradation and decolorization of pulp mill wastewater was also studied to search the degradability of kraft lignin—for example, the potential bacterial strains Bacillus subtilis (GU193980) and Klebsiella pneumoniae (GU193981) were isolated and used in the process to treat the pulp and paper mill waste. The results show that the bacteria mixture was efficient in removing 80% of the color and reducing the other pollution parameters, such as COD by 73% and BOD by 62% [14].
Other studies isolated 12 strains, of which the most abundant and promising genera in degrading lignin were mesorhizobium, cellulosimicrobium, pandoraea, achromobacter, and stenotrophomones, achieving an average of 30% removal [15]. Additionally, in studies of the conglomerate of microorganisms in a sludge that contained 4-chlorophenol, with genus pseudomonas being the more abundant strain, Proteobacteria and Firmicutes were dominant in the chlorophenol degradation [16]. Different studies have referred to the analysis of the degradation of toxic compounds using bacteria consortia, with two or three strains and sometimes up to four [16,17,18,19,20,21]. The biodegradation of an industrial mixture of PCBs was performed using bacterial consortia composed of four bacterial strains isolated from the contaminated sediments. The consortium containing two strains showed a good degradation of the highly chlorinated PCB. The consortium made up of three bacterial strains showed a higher biodegradation, reaching 73% of the degradation of the organic compound and reducing the toxicity in 7 days [22,23]. Co-cultures using microalgae have also been used to degrade the effluents derived from the olive oil mill, effluents that contain high concentrations of phenolic compounds that are difficult to degrade. The treatment consisted of two parts: aerobic and anaerobic. It allows, on the one hand, for a reduction in organic matter and the generation of hydrogen, but the biodegradation of organic matter is not achieved since the inverse process requires a high concentration of oxygen [24]. Fermentation processes have also been carried out using native bacteria to treat organic waste from the wine industry for hydrogen production [25].
The microorganisms are ecologically important in soil and water and are probably responsible for the aerobic degradation of many soluble compounds derived from animal and vegetable organic matter in decomposition. Thus, this study aimed to evaluate the capacity of the native bacteria to degrade phenolic compounds present in the pulp and paper industry wastewater, using the carbon of the molecules as a unique carbon source to generate energy for its growth without adding other nutrients. The importance of the use of microorganisms in the treatment of contaminated water is the need to reduce contamination using methods that are friendlier to the environment, and the handling of a single microorganism allows for the better management of its biomagnification in the system.

Pure water-soluble lignin with a molecular weight between 5000 and 28,000 g mol−1 was used to prepare the 100 ppm solutions. The samples were incubated with the bacterial inoculum RGM2262 [24] at 30 °C for 5 days, which was prepared in Peptone Soybean Casein Agar (Merck). The viable cell counting method was used to determine bacterial growth. The residual Lignin was determined through a calibration curve at 280 nm and the residual color at 460 nm using a UV-1601 Shimadzu spectrophotometer. A 1 L reactor capacity to a flow of 200 mL h−1 was used to carry out the degradation. The bacteria in biofilms were formed on a 21.5 × 2.0 cm polyethylene layer, whereby the inoculated bacteria remained in contact with the polyethylene for 24 h before it was used in the degradation treatment.

The chemical oxygen demand (COD mg O2L−1) was determined using the Merck Spectroquant kit with a measured range of 25 to 1500 mg O2 L−1, according to the standard methods 5220 D and ISO 15705. Before analysis, the samples were refluxed for 2 h in a thermoreactor Spectroquant TR620 (Merck KGaA, Darmstadt, Germany).

The Merck Spectroquant kit from 50 to 800 mg C L−1 was used to determine the TOC. The samples were refluxed for 2 h in a thermal reactor Spectroquant TR620, and the TOC was analyzed using a Spectroquant® NOVA 60 (Merck KGaA, Darmstadt, Germany). The TOC was expressed in mg of C L−1 according to the standard method: ISO 84661-1 and DIN38402 A51.

Bacterial growth was determined using the serial dilution method in agar, which was standardized with the McFarland standard. The bacterial inoculum was incubated for 24 h at 30 °C. Viable bacterial colonies were counted every 24 h for a total of 120 h, recording the number of colony-forming units (CFUs).

The experimental design was used to evaluate the optimal response of the bacteria to the degradation of the phenolic compounds. The design was constructed with the MODE 7.0 program with two experimental variables—a pH between 7 (−1) and 9 (+1) and a treatment time in days between 1 (−1) and 5 (+1). A matrix with 12 experiments was given by the quadratic model, with a factorial design 2n, as shown in Table 1. The design runs with nine combinations between the variables, of which four correspond to the minimum and maximum, and three correspond to the central points and replicas. The observed response was the value obtained experimentally, and the predicted response was the value given by the design according to the value of the variable used. Both responses are given as a removal percentage of phenolic compounds.

Bacteria RGM2262 was able to degrade a high concentration of lignin from a pulp and paper mill, using the carbon of its structure as the only energy source for its growth. The bacteria in both cases—forming biofilm and free—were effective in degrading organic matter, resulting in their complete removal at a more basic pH after 24 h of treatment. This result is relevant, since the effluents generated in the pulp and paper mill are characterized by a high pH, which eliminates a previous treatment such as the neutralization of the effluent. On the other hand, the higher basicity improved lignin solubility, facilitating their passage through the layer of exopolysaccharides in the biofilms. The results show that the bacteria can be used in the bioremediation of wastewater that contains high concentrations of phenolic organic matter, transforming the compounds to less hazardous or non-hazardous forms without having to add additional chemicals to the effluent. Additionally, the experimental design carried out for the optimization of the wastewater treatment using bacteria showed a good correlation between the variables studied and the response obtained. The observed R and Q values close to one indicate an accurate representation of these relationships.

The authors acknowledge the financial support from ANID InES Ciencia Abierta INCA210005. The authors thank Carolina Soto for contributing to this work by providing the bacteria. 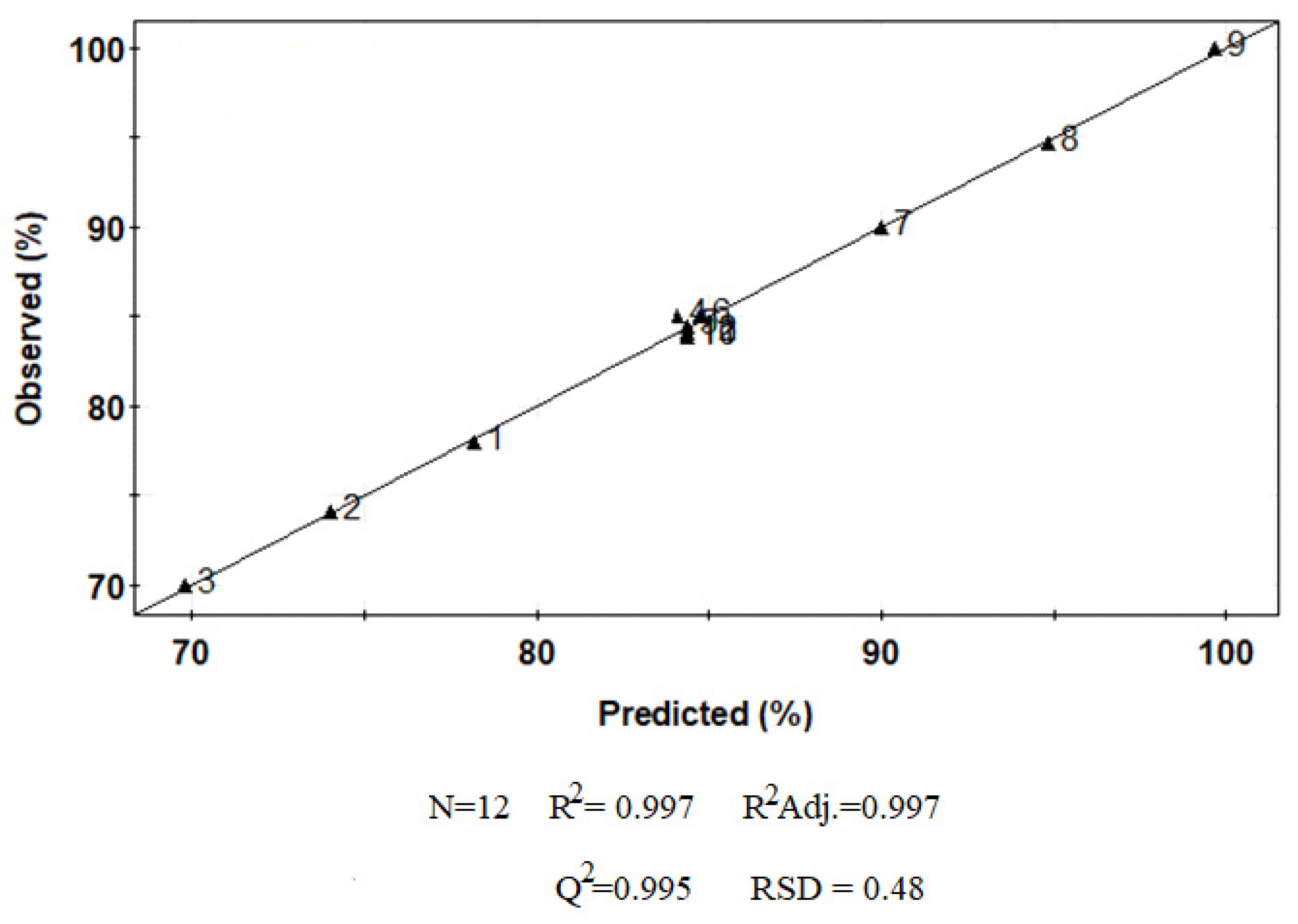 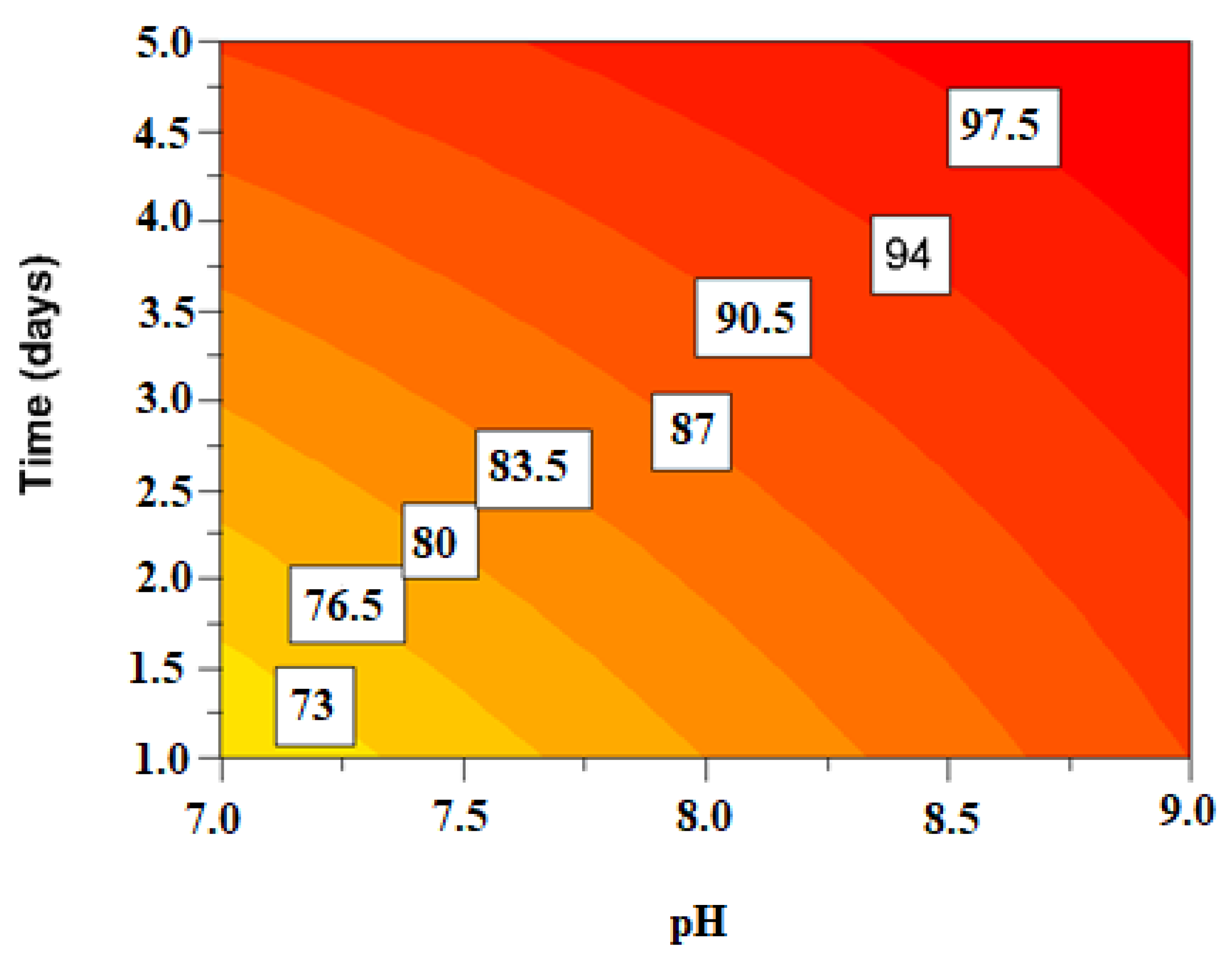 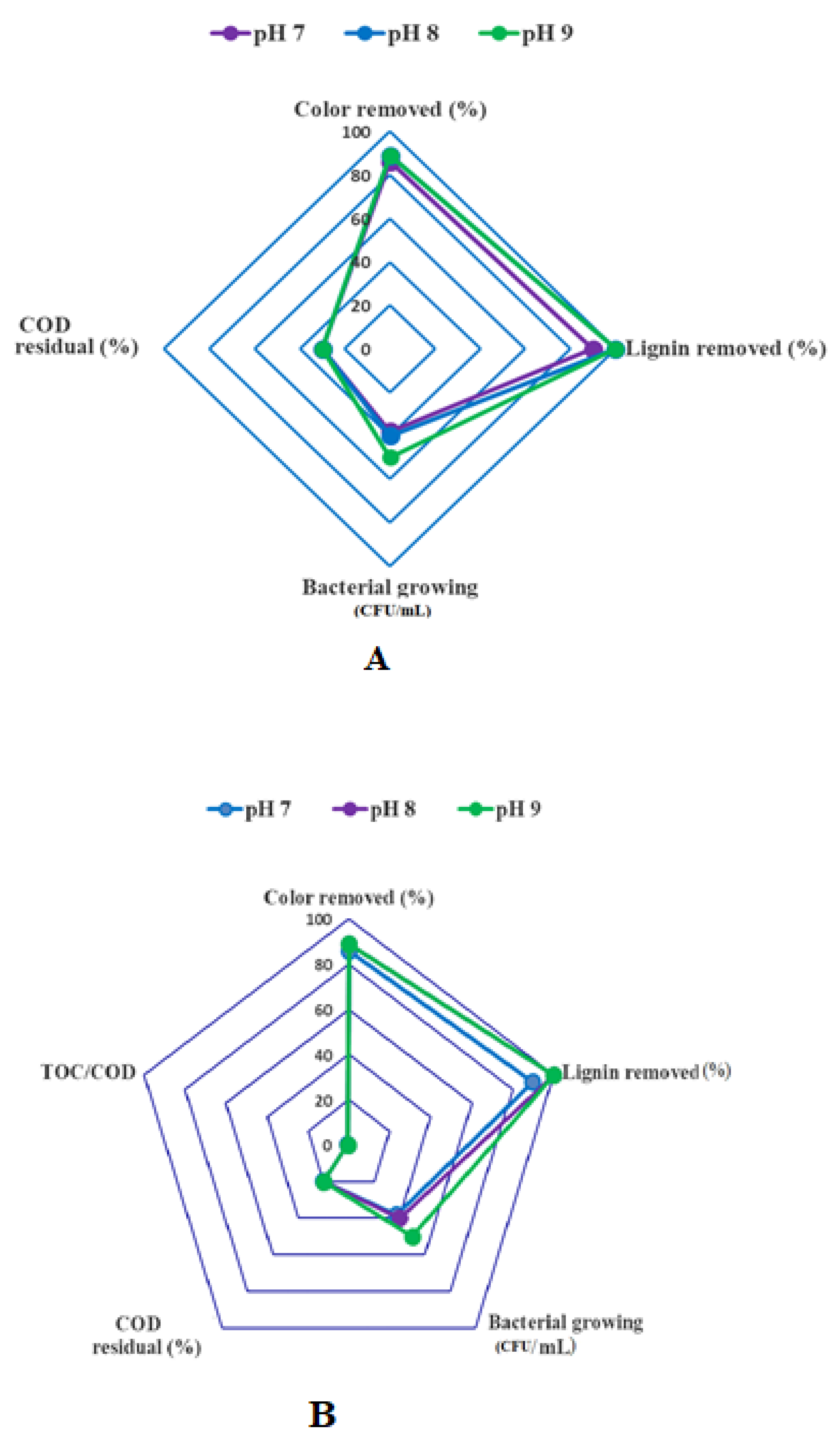