Populations of Acropora cervicornis, one of the most important reef-building corals in the Caribbean, have been declining due to human activities and global climate change. This has prompted the development of strategies such as coral farms, aimed at improving the long-term viability of this coral across its geographical range. This study focuses on comprehending how seawater temperature (ST), and light levels (LL) affect the survival and growth of A. cervicornis fragments collected from three reefs in Culebra, Puerto Rico. These individuals were fragmented into three pieces of the similar sizes and placed in farms at 5, 8, and 12 m depth. The fragments, ST and LL were monitored for 11 months. Results show that fragments from shallow farms exhibit significantly higher mortalities when compared to the other two depths. Yet, growth at shallow farms was nearly 24% higher than at the other two depths. Corals grew fastest during winter, when temperature and LL were lowest, regardless of the water depth. Fragment mortality and growth origin were also influenced by reef origin. We conclude that under the current conditions, shallow farms may offer a slight advantage over deep ones provided the higher growth rate at shallow farms and the high fragment survival at all depths. View Full-Text
Keywords: restauration; coral farm; Acropora cervicornis; sea temperature; light levels restauration; coral farm; Acropora cervicornis; sea temperature; light levels
►▼ Show Figures 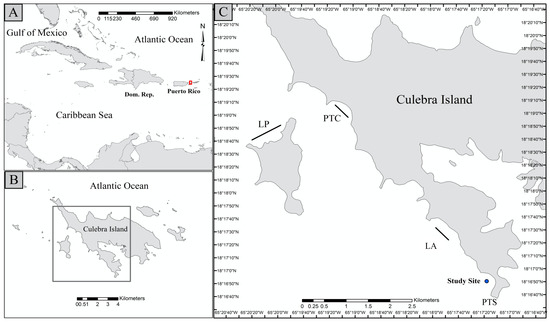