Influence of Urbanization on Patterns of Variability of Mytilus galloprovincialis Populations

On the Presence and Ubiquity of the Exotic Batophora (J. Agardh) in the Mar Menor Lagoon (SE Spain)

We first report the presence of a species of the genus Batophora in the Iberian Peninsula, in the Mar Menor lagoon (Murcia, SE Spain). We detected this macroalga in November 2021. However, according to some observations, it could have been present in the lagoon at least since 2016, being described as a “rare” form of Dasycladus vermicularis. A further survey made during May 2022 confirmed the presence of this species in much of the perimeter of the Mar Menor. Morphologic analyses are not conclusive regarding the species description, but most traits point to Batophora occidentalis or Batophora occidentalis var. largoensis. A consensus sequence from the rbcL barcode gene was compared by the Blastn tool showing its closeness to other Batophora specimens, yet the specific level was unresolved. The recent confirmation of a Batophora species in a littoral lagoon from Formentera (Balearic Islands) with similar morphologic characteristics could indicate that both putative introductions are connected. Further morphologic and genetic analyses are required in order to know the origin and expansion of this genus along the Mediterranean coasts. View Full-Text
Keywords: alien species; Mediterranean Sea; Iberian Peninsula; algae; rbcL barcode; global change alien species; Mediterranean Sea; Iberian Peninsula; algae; rbcL barcode; global change
►▼ Show Figures 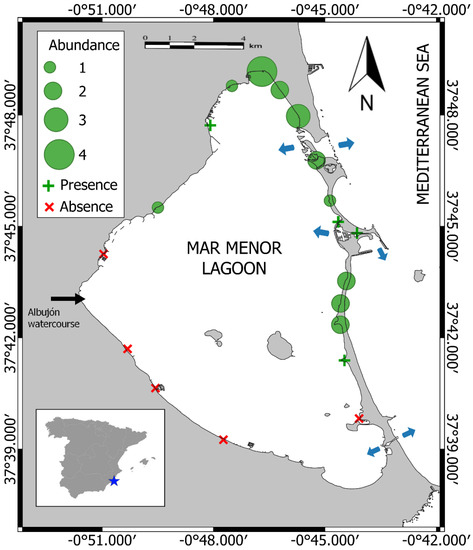