2. The Historical Evolution and Complexity of Human—Water Relationship in the Yellow River Basin

2.1. Overview of the Yellow River Basin

2.2. Ecological Evolution of the Yellow River Basin and Its Driving Factors

2.3. The Complexity and Evolution Stages of Human—Water Relationship in the Yellow River Basin

3. Difficult Problems in Dealing with Human—Water Relationship in the Yellow River Basin

3.1. Difficult Problems Caused by the Complexity of Human—Water Relationship

3.2. Demonstration of the West Route of the South-to-North Water Diversion Project

The west route of the South-to-North Water Diversion Project is a major inter-basin water transfer project to alleviate the water supply contradiction in northwest China. However, if the demonstration is not sufficient, it may bring about major problems in planning, design, construction and operation. The following problems often arise in the demonstration of inter-basin water transfer projects. (1) Most of the demonstration work focuses on emphasizing the necessity of water transfer projects and desalinating the adverse effects on the region. The voice of the beneficiary is louder, and the voice of the disadvantaged is weaker. (2) Judging from the funding situation, there are no or very few counter-argumentation topics for special research. The starting point of professional argumentation or industry funding has been biased toward supporting water transfer from the beginning, while opponents have less support channels. (3) Inter-basin water transfer projects involve many aspects, and it is difficult to analyze from a systematic perspective with general research depth and limited financial support. Because of the complexity of the argument, decisions may be made without the depth of the argument.

3.3. Water Distribution of the Yellow River

Floods and droughts are still a prominent threat to the Yellow River Basin. If the main rain area of Zhengzhou’s “7.20” rainstorm in 2021 is in the Yellow River Basin, the peak flow at Huayuankou will exceed 20,000 m3/s. The severe drought in the upper reaches of the Yellow River in 1973 and the severe drought in the middle reaches of the Yellow River in 1980 brought serious disasters to the basin. Although human beings have accumulated rich experience in the long history, there have been problems in the attitude toward flood and drought disasters. (1) Attempt to completely control or eliminate the disaster. However, numerous facts have proved that floods and droughts are universal natural disasters, and it is impossible for human beings to completely eliminate the existence of natural disasters. (2) It is customary to treat flood and drought disasters as independent disaster events to respond to. In fact, floods and droughts are both a node in the water cycle process and are not isolated events. The likelihood of droughts tends to increase after floods. (3) It is customary to respond to floods and droughts as sudden disasters. Although there are well-developed emergency measures, systemic response capabilities such as daily risk prevention and early warning forecasting are insufficient.

4.1. Overview of the Proposition and Main Contents of Human—Water Relationship Discipline

4.2. Solutions to Difficult Problems in the Yellow River Basin Based on the Perspective of Human—Water Relationship Discipline

(1)
Demonstration of the west route of the South-to-North Water Diversion Project. Combined with the simulation method of human–water relationship, it should be simulated and demonstrated from both positive and negative aspects based on the interaction principle of human–water relationship. Forming two academic camps and forming a consensus through discussion will help the government to make more scientific decisions. Based on the thinking of human–water game theory, analyze and demonstrate from a global perspective, and avoid making decisions when the depth of the argument is insufficient.
(2)
Water distribution of the Yellow River. Based on the adaptive principle of human–water system, combined with the harmony assessment method, consider the dynamic adaptability of regional human–water system. Then formulate the water distribution calculation method and process, and determine the water distribution of the Yellow River. Based on the human–water system theory to establish the idea of harmonious water distribution, and to ensure the stability of various ecological functions of the water system and realize the harmonious coexistence of human and nature. Coordinate the relationship between different water-using areas and the relationship between water resources carrying and economic development, so as to promote the harmonious development of the human–water system in the Yellow River Basin.
(3)
Construction of large water conservancy projects. To follow the principle of balance transfer of human–water system, and strive to make the human–water system to the benign direction. The construction of large-scale water conservancy projects will inevitably bring about changes in the river water ecosystem, and it is necessary to regulate and demonstrate that the transformed system is acceptable. Based on the theory of human–water harmony, combined with harmonious regulation method, adhere to the concept of harmonious coexistence between man and nature to scientific demonstration and regulation. Encourage some people to stand in the perspective of nature and have a dialogue with engineering demonstrators.
(4)
Flood and drought disaster prevention and control. Learn to deal with floods and droughts from the principle of harmonious evolution of human–water relationship. Based on the concept of human–water system theory, combined with harmonious regulation method, build an integrated disaster prevention and relief system. Flood and drought disaster prevention is a systematic project. First of all, the hardware capacity should be improved. Secondly, the popular science education of flood control and drought relief should be strengthened. Finally, a disaster prevention and relief system of “government command, department leadership, and public participation” should be formed.

The solutions discussed above are only a general introduction at the macro level. Only the basic theories and methods of human–water relationship discipline are covered, and no more in-depth and detailed exploration is carried out at the application level. In order to further verify the ability of human–water relationship discipline to guide the solution of practical problems, the following is a concrete application of its theory and method system, taking the Yellow River water distribution problem as an example.

4.3. A Case Study on the Water Distribution of the Yellow River from the Perspective of Human—Water Relationship Discipline

4.3.1. The Necessity of Further Research on the Water Distribution

4.3.2. The Ideology and Principle of the Water Distribution

4.3.3. The Formulation and Calculation of the Water Distribution Scheme

(3)
Water is allocated according to the proportion of the actual population. Population is one of the main indicators that affect and even determine the scale of water use. This criterion is to allocate water according to the population of each region under the condition of ensuring the ecological protection of the Yellow River. The calculation method is as follows [29]:

In Equation (3), is the water distribution amount in region k, 108 m3; is the GDP of region k; is the total GDP in the Yellow River Basin.

(5)
Water is allocated in proportion to the area of the basin in each region. In order to reflect the contribution of different regions to water production in the basin, it is reasonable and fair to use basin area or water production ratio to divide the water. The calculation method is as follows [29]:

In Equation (4), is the water distribution amount in region k, 108 m3; is the basin area of region k; is the total area of the Yellow River Basin.

(6)
Water is allocated according to the maximum overall harmony degree (HD). The water distribution of the Yellow River should adhere to the idea of harmonious water distribution. The harmony evaluation method in the human–water relationship discipline is adopted. Water is allocated reasonably according to factors such as water use, geographical location, and per capita water consumption so as to achieve the maximum overall harmony degree. The calculation method is as follows [30]:

4.3.4. The Result and Analysis of the New Water Distribution Scheme

5. Possibility and Prospect of Applying the Human—Water Relationship Discipline to the Research of Complex Basins

Publicly available datasets were analyzed in this study. These data can be found here: (http://www.stats.gov.cn/tjsj/ndsj/ (accessed on 21 May 2022)).

The authors are grateful to the editors and the anonymous reviewers for their insightful comments and helpful suggestions. 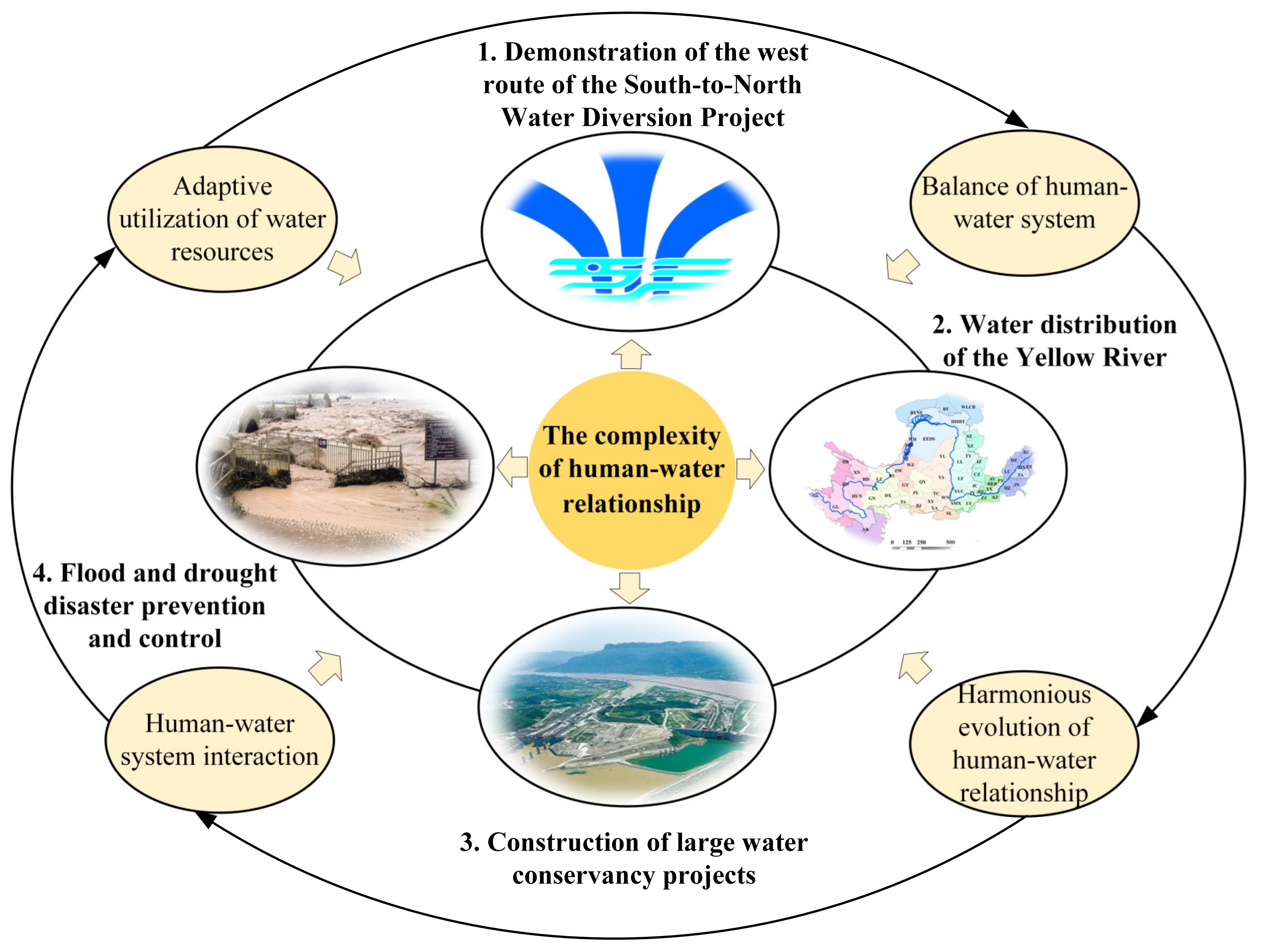