Are UK Rivers Getting Saltier and More Alkaline?

Drought is recognized as a natural environmental disaster [1,2,3,4]. Meanwhile, drought also has a negative impact on the environment, ecology, agriculture, and social economy of a region [5,6,7,8,9]. Compared with other types of disasters, drought is unpredictable, difficult to defend, and has a wide range of influencing characteristics [5,9,10,11,12]. Therefore, drought has more serious uncertainty [13], destructiveness [5], and crypticity [14] than other types of disasters in the natural environment. Moreover, drought also has an important impact on the ecological environment at basin scales [2,12,15].
Based on the origin and impact, drought is also divided into many types, such as meteorological drought, hydrological drought [16], agricultural drought [1], vegetation drought [9], groundwater drought [17], and socioeconomic drought [18]. Drought transmission can also be divided into many types [5,16]. Therefore, meteorological, agricultural, and hydrological droughts are early development drought types in nature [5]. Meanwhile, meteorological drought usually occurs when a lack of precipitation appears in a region for a period of time [5,19], while hydrological drought is defined as inadequate surface and subsurface water resource conditions occurring in a region [5,20]. At present, droughts are usually described by the drought index in many studies [1,5,14,21]. For example, Vicente-Serrano et al. [22] employed a standardized precipitation evapotranspiration index to explore global vegetation response time to meteorological drought; Asadi Zarch, et al. [23] used a standardized precipitation index (SPI) to investigate global warming and global drought change trends; Wu et al. [24] used a nonparametric standardized runoff index to investigate hydrological drought risk in the Loess Plateau; Ding et al. [16] used a standardized runoff index (SRI), standardized precipitation evapotranspiration index and the Palmer drought severity index to analyze the relationship among meteorological, agricultural and hydrological drought in China. The SLRB (Songhua and Liaohe River Basin), HARB (Haihe River Basin), HURB (Huaihe River Basin), YRB (Yellow River Basin), YARB (Yangtze River Basin), PRB (Pearl River Basin), SEB (Southeast Basin), SWB (Southwest Basin), and CB (Continental Basin) were analyzed in this study. Meanwhile, the simulated and observed datasets have also been widely used in the calculation of drought indices in many studies [9,13,23,25,26]. For example, Vicente-Serrano et al. [22] used the Climatic Research Unit (CRU) precipitation and potential evapotranspiration dataset to compute the global SPEI; Peel et al. [27] also used the CRU precipitation and temperature dataset to divide global climate regions; Zhang et al. [28] also used the CRU precipitation and potential evapotranspiration dataset to compute the Palmer drought severity index in China. Ding et al. [16] used a runoff dataset to compute the SRI in China. Therefore, the dataset could be reliably used to compute drought because the dataset has a wide application and a high accuracy [16,22,27,29].
At present, there are many drought-related studies [15,30,31,32,33]. Some studies have focused on the effects of drought. For example, Zhou et al. [2] and Xu et al. [14] analyzed the vegetation response time and the degree of SPEI; Huang et al. [12] investigated the propagation time from meteorological to hydrological drought in the Wei River Basin; Guo et al. [34] also investigated the propagation thresholds from meteorological to hydrological drought in the Wei River Basin. Some studies have focused on drought change. For example, Yao et al. [35] analyzed the drought change trend during 1961–2013 in China; Yao et al. [36] also analyzed the drought change trend in the future across China. Some studies have focused on developing new drought indices. For example, Wang et al. [37] developed a new drought index of the standardized precipitation evapotranspiration runoff and estimated its applicability in Sichuan Province; Zhang et al. [38] also developed a new framework to monitor global multicategory and multiscalar drought.
However, most of these previous studies on drought characteristics were about trend frequency and risk [33] and the evaluation of drought propagation characteristics is still relatively rare. Therefore, the objective of this study was to explore the drought propagation relationship due to meteorological and hydrological droughts in different seasons across nine river basins of China. The aim of this study was as follows: (1) to investigate the propagation time and relationship of meteorological and hydrological drought in the main river basins of China; (2) to analyze the relationship between meteorological and hydrological drought on an annual scale; (3) to quantitatively analyze the main drivers of drought propagation in China; and (4) based on the results of this study, to explain the reasons for the difference in drought propagation in China. The findings could also be used to understand the propagation from meteorological to hydrological drought and the propagation differences among different river drains.

The use of standardized drought indices has been increasingly witnessed in the meteorological and hydrological community for drought monitoring and impact assessment [20,23,24,43] due to the simplicity, standardized nature, and flexibility of use in time and space [48]. In this study, SPI and SRI are used to represent meteorological drought and hydrological drought, respectively. Both SPI and SRI can describe the characteristics of drought at different timescales, and the standardized index calculation process is relatively simple. The Pearson correlation analysis and Lindeman–Merenda–Gold (LMG) method are used to analyze the drought propagation characteristics.

The data that support the findings of this study are available from the corresponding author, [F.W.], upon reasonable request. 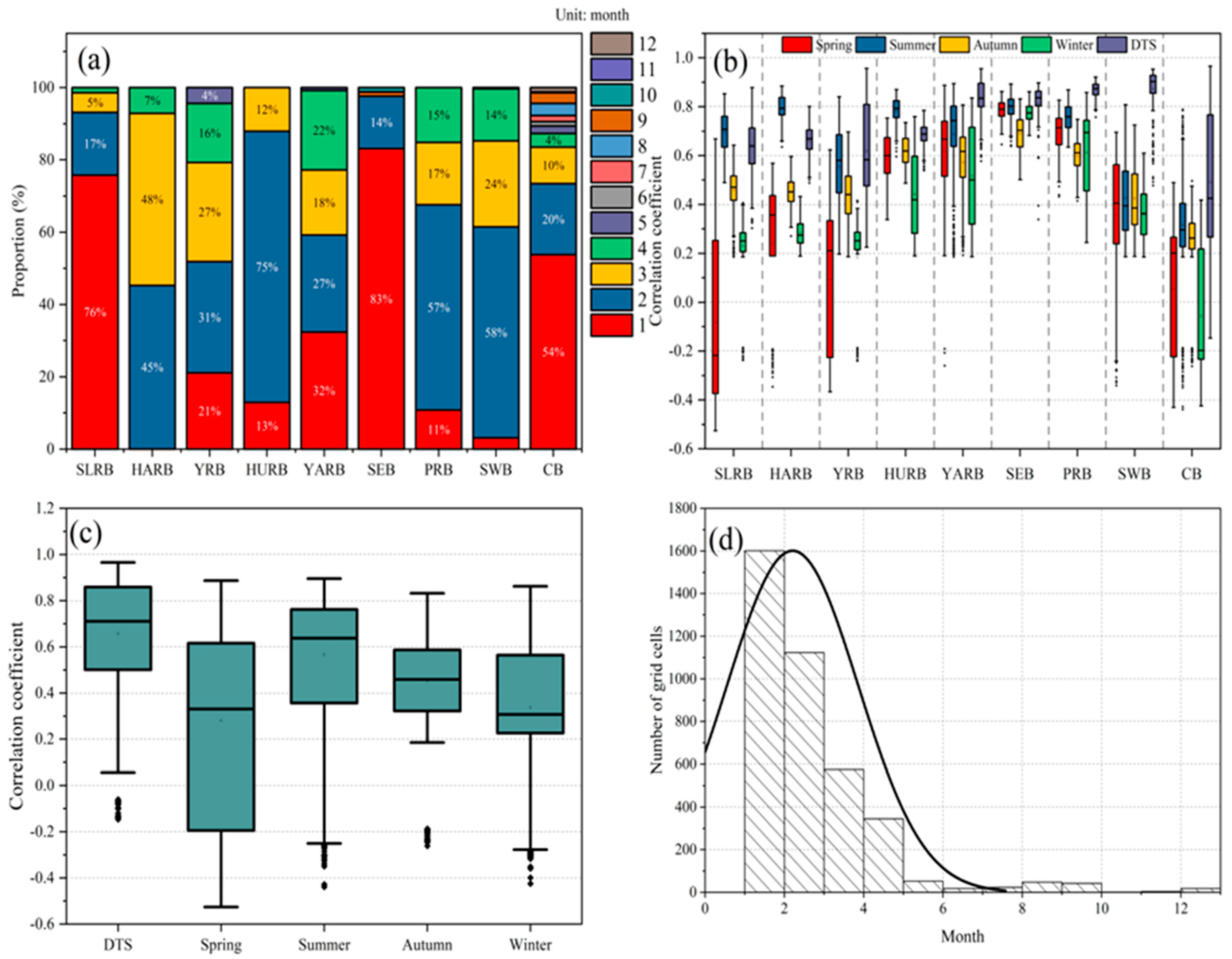 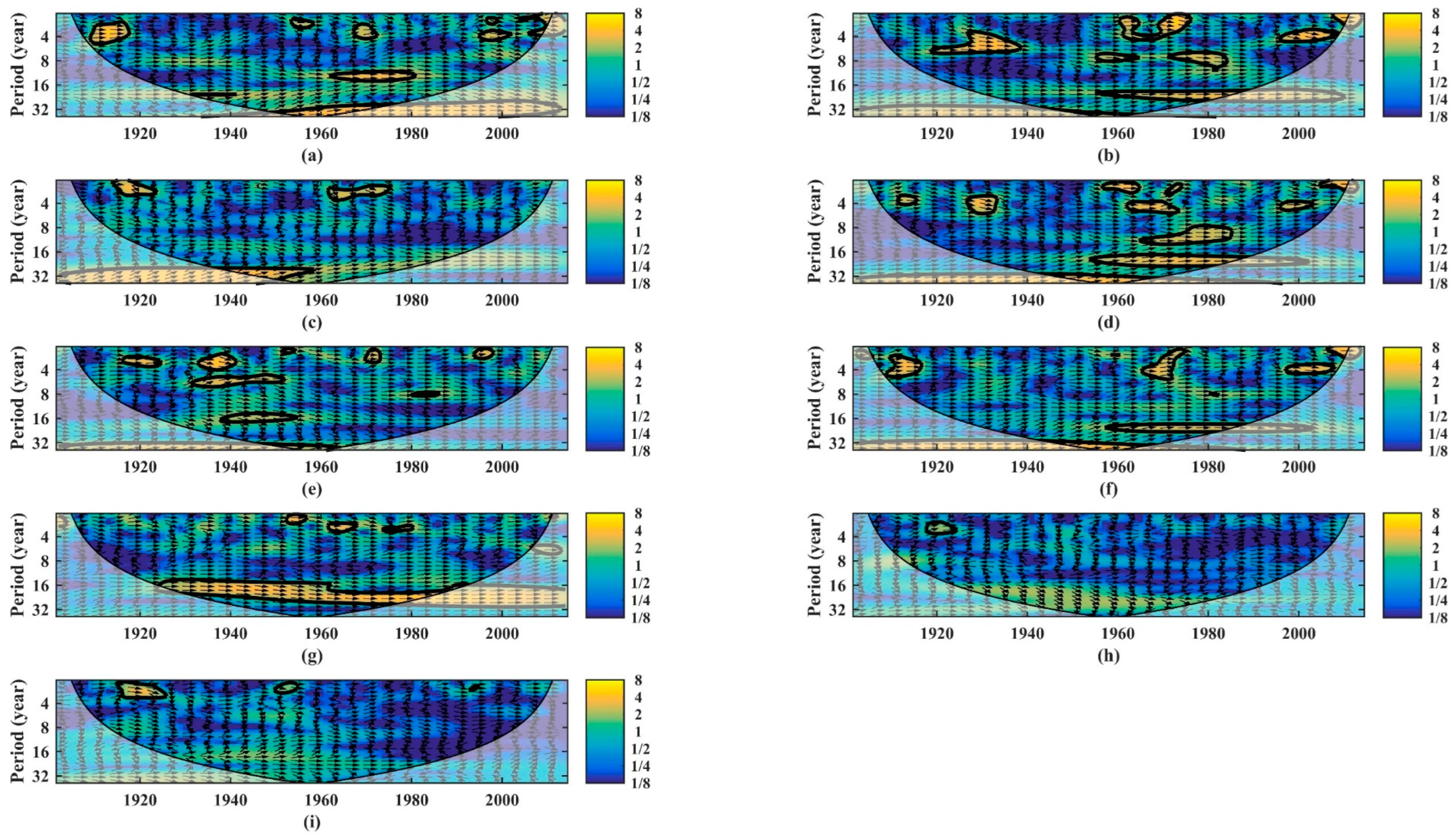