A Review on Marine Economics and Management: How to Exploit the Ocean Well
Previous Article in Special Issue

In the solid–liquid two-phase flow, the water is the primary phase while the sand is the secondary phase. The Eulerian multiphase model was employed to predict the solid–liquid two-phase flow in the pipe [26,30,34,35].The model treats each phase as a continuous medium in time and space, existing in the same space and permeating each other. However, each phase has different volume fraction velocities, temperatures and densities. There is slip and interaction between phases. Momentum and continuity equations are solved for each phase. The following is the governing equation of the Eulerian model applicable to multiphase flow.
The description of multiphase flow as interpenetrating continua incorporates the concept of phasic volume fractions, denoted here by .
The solid phase is represented by s, the liquid phase is represented by l, and is the volume fraction of the liquid phase and the solid phase respectively, then:
The conservation of the mass equation for phase q is: where is the physical density of phase q, is the velocity of phase q, characterizes the mass transfer from phase q to phase p, and characterizes the mass transfer from phase p to phase q, and t is time.
In this study, there was no mass transfer between the solid and liquid phases, so and are both 0, and Equation (3) was simplified as:
The conservation of momentum equation for phase q is: where is the qth-phase stress–strain tensor: where g is the acceleration of gravity, and are the shear and bulk viscosity of phase q, is the unit tensor, is an external body force, is a lift force, is a wall lubrication force, is a virtual mass force, is a turbulent dispersion force, and p is the pressure shared by all phases. is an interaction force between phases. and are the interphase velocities.
This paper considered the effect of gravity on sand deposition. Only the interaction force was considered between phases, ignoring the forces that have less influence such as lift force and virtual mass force. Equation (5) can be simplified as:
For solid–liquid two-phase flow, the interaction force uses the Wen-Yu model and satisfies : where is the diameter of the solid phase; and is the relative Reynolds number.

The typical small-angled V-inclined pipe in the pipeline irrigation project of the Yellow River irrigation area was used as the research object. It consisted of −2° downward-inclined pipe and +2° upward-inclined pipe, as shown in Figure 1. The prototype size was used for three-dimensional modeling. The pipe diameter and length were 2600 mm and 80 m, respectively. The sections denoted S1, S2, S3, S4 and S5 on the pipe, as shown in the figure, are the cross-sections where the predicted data were obtained for analysis. Sand deposition at different inflow velocities can be observed in these cross-sections. S3 was the section where the lowest point of the pipe was located. S1, S2, S4 and S5 were located at −20 m, −10 m, 10 m and 20 m, respectively, from the S3 section.
In the study of sand transport and deposition characteristics of multiphase flow, the grid is an important factor affecting the numerical simulation. The coarse mesh of 764,000 cells, the medium mesh of 1,487,600 cells, and the fine mesh of 1,855,600 cells were employed to analyze the sensitivity of the grid resolution to the numerical simulation results, as shown in Figure 2. Considering the influence of wall roughness on the sand deposition, five boundary layers were established along the surface with a growth factor of 1.2, and the height of the first layer from the wall was 5 mm.
The slurry velocity at the S3 cross-section was chosen to evaluate the effect of the grid number on the flow characteristics. Numerical simulations were carried out at an inlet volume fraction of 0.42% and an inlet velocity of 0.3 m/s. Table 1 shows the slurry velocity at the S3 cross-section for different grid numbers and the relative errors between them. Considering the computational time and accuracy, the final numerical simulation of the multiphase flow was carried out with a grid number of 1,487,600.

The ANSYS FLUENT software was used as a computational platform. The pressure and velocity equations were coupled using a phase-coupled SIMPLE algorithm. The continuity, momentum and turbulence equations were discretized by the second-order upwind scheme, while the volume fraction equation was discretized by the first-order upwind. Velocity and volume fraction of liquid and solid phases were assigned at the inlet condition of this pipe. The pressure was specified at the outlet condition of this pipe. The turbulence specification method used the intensity and hydraulic diameter. At the wall, the velocity was set to zero, which corresponds to the no-slip condition.
The literature shows that the particle size has a greater effect on critical velocity than bed roughness [37]. In the numerical simulation, the roughness of the pipe was not considered. The liquid phase was regarded as an incompressible fluid, and the physical properties of the solid phase were all constants, without considering the phase transformation. The shapes comprising the solid phase were treated as spherical particles of the same size. Table 2 shows parameters under different simulation conditions.
The numerical simulation method for solid–liquid two-phase flow used in this paper was validated by previous experiments [23,26]. The prediction of the critical velocity was achieved by setting different inflow velocities.

This work was supported by the National Natural Science Foundation of China (No.: 51876099). 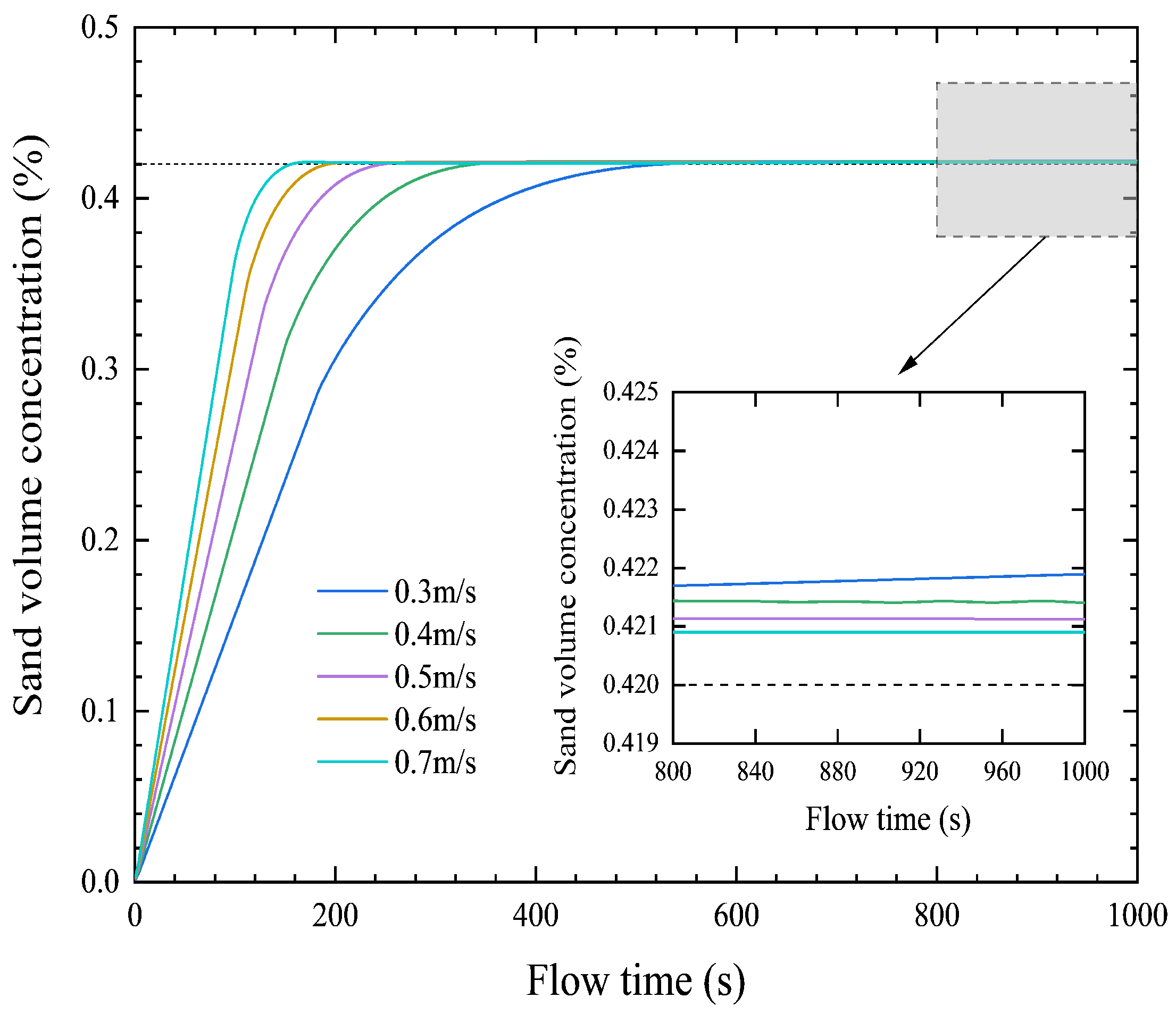 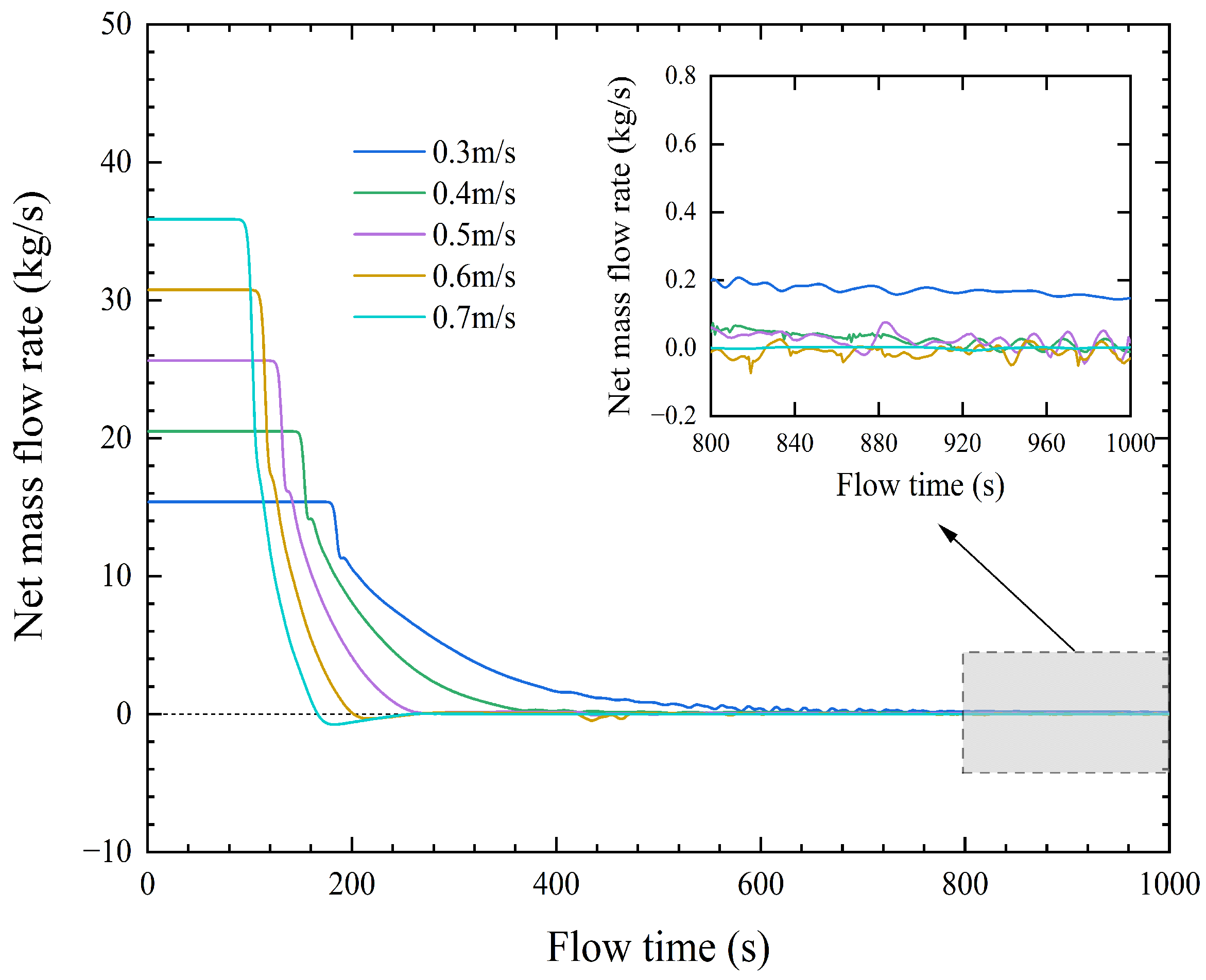 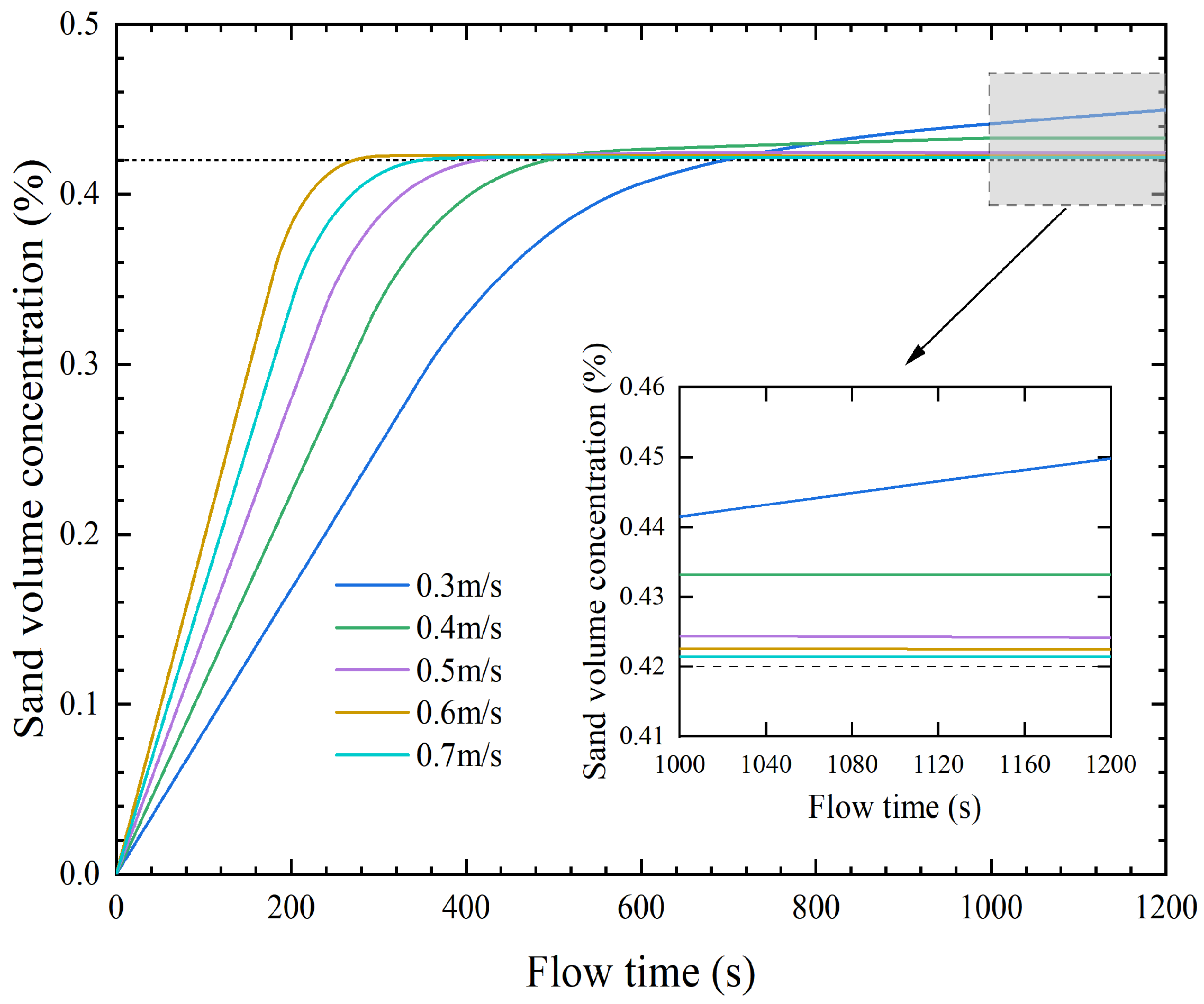 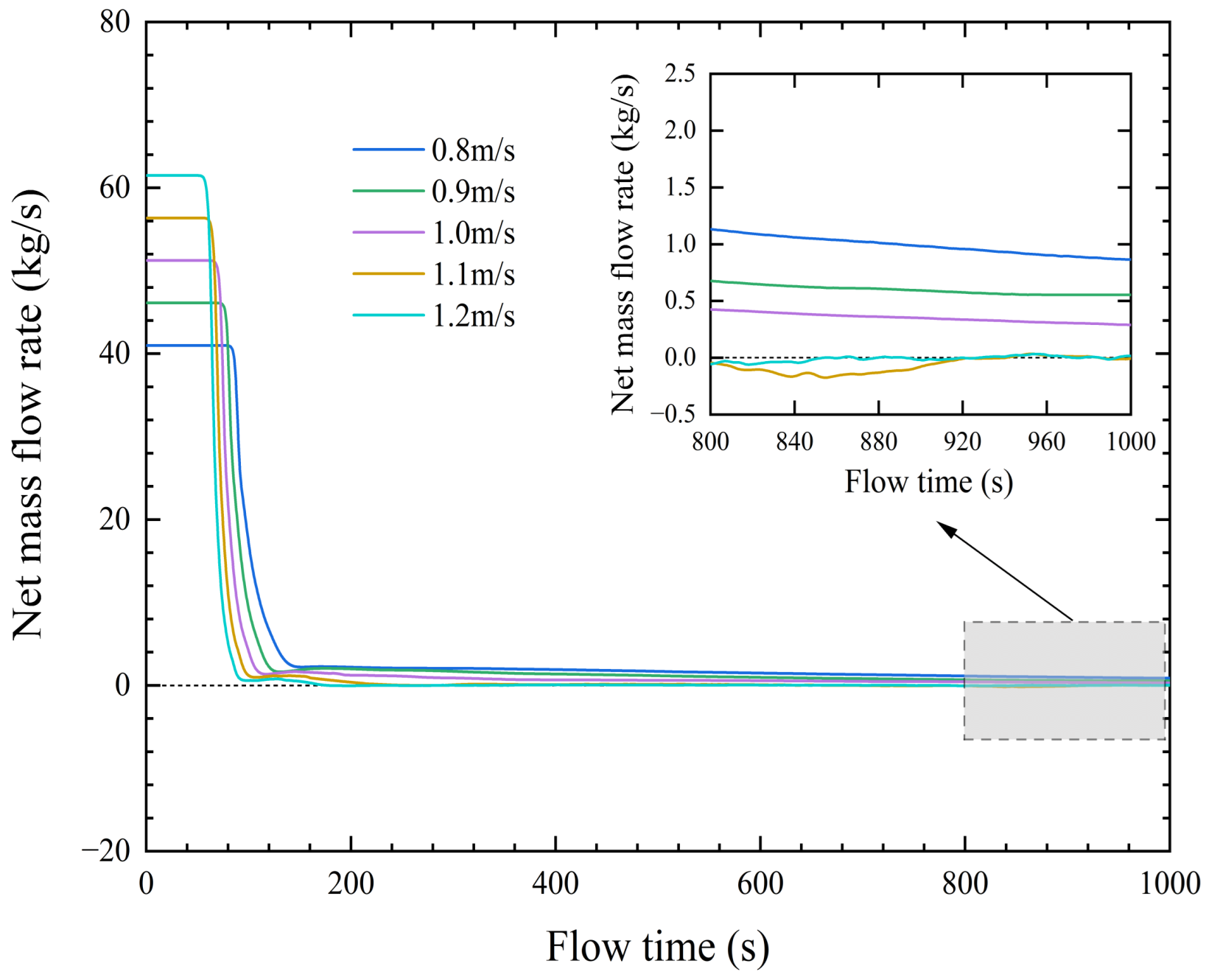 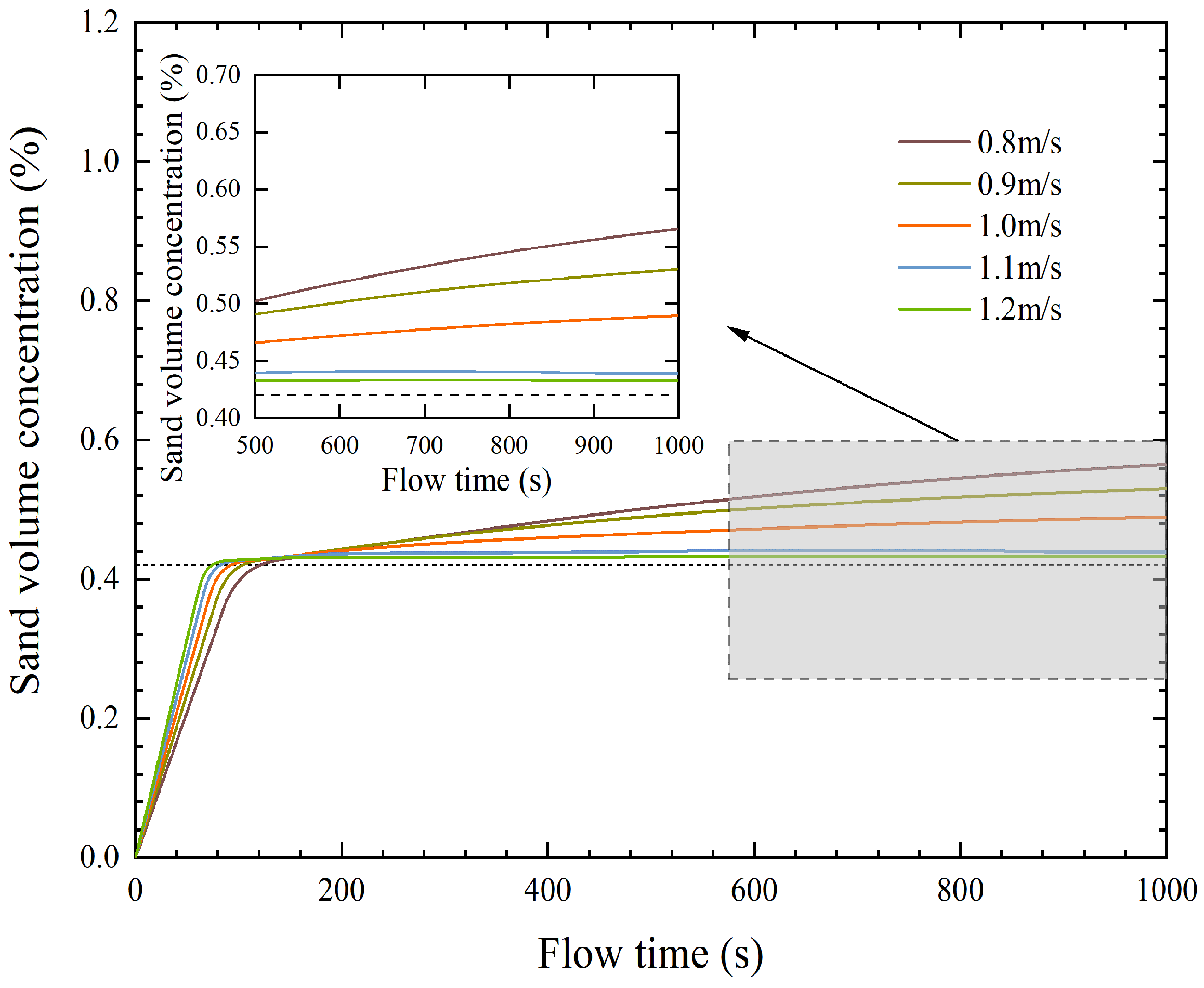 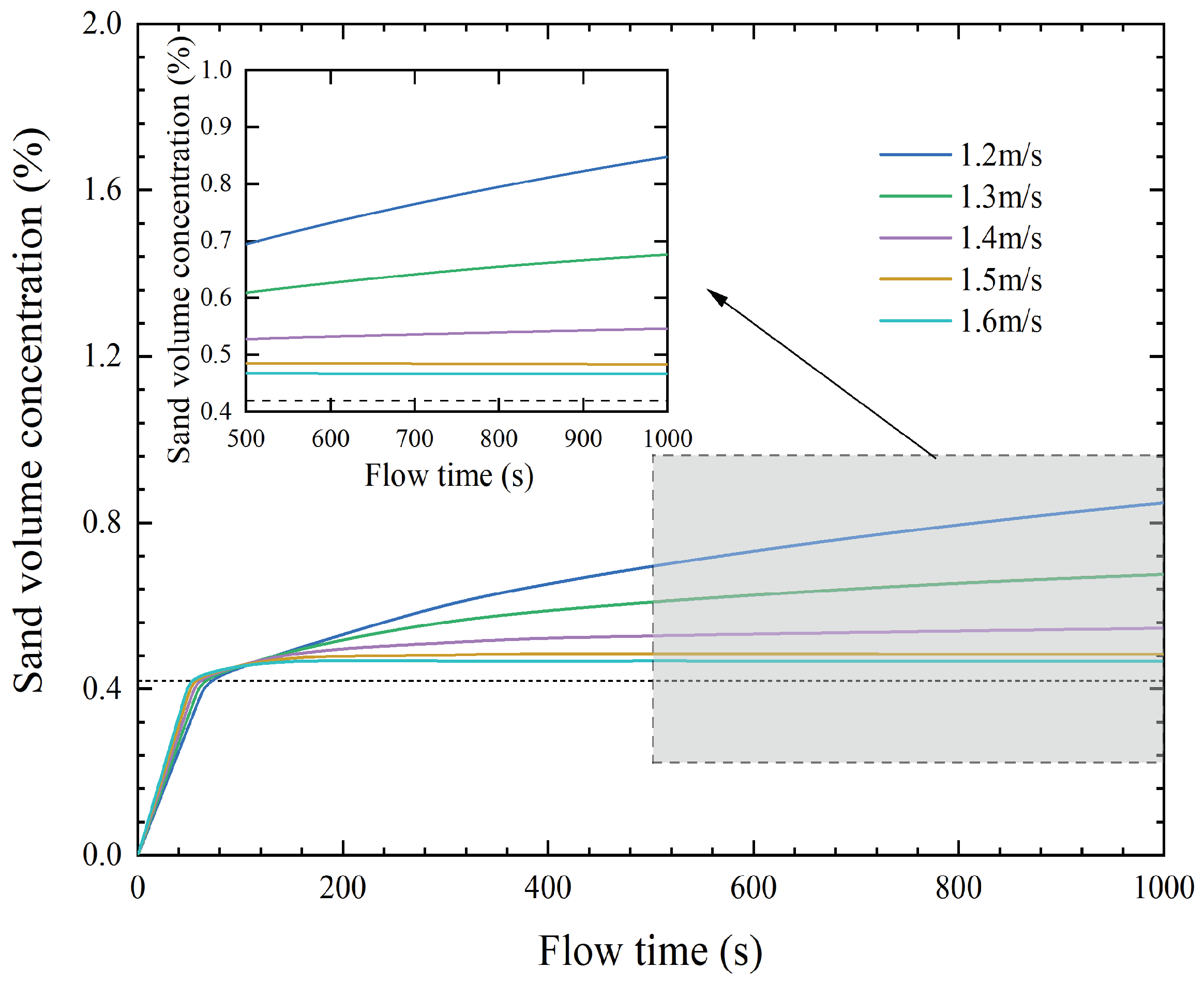