High-Precision Calculation of the Proportions of Water with δ2H and δ18O, the Cumulative Effect of Evaporation in the Vertical Direction and Depleted δ2H and δ18O of the Shallow Soil Water Caused by Evaporation
Next Article in Special Issue

Flushing Capacity of a Stored Volume of Water: An Experimental Study
Previous Article in Journal

Experiments on the Drag and Lift Coefficients of a Spinning Sphere

Drag and lift forces are loads that affect particle motion. The lift force can often be significant and can even approach the magnitude of the drag force in some circumstances for surface spin velocities on the order of the translational particle velocity. Saffman [1] and Magnus [2] pointed out that the lift force is especially important for lateral migration in tubes and particle deposition in boundary layers. Yang and Leeming [3] and Barkla and Auchterlonie [4] called the lift force originating from rotating of particles the Magnus lift force. The drag and lift coefficients have been studied by researchers using theoretical analysis, experimental tests, and numerical simulations.
Theoretical studies provide exact results but are limited to special geometries and low Reynolds numbers. In this regard, Rubinow and Keller [5] derived an analytical solution for the spin-lift force in the Stokes regime through matched asymptotic expansions. It was found that the lift coefficient depends on the dimensionless angular speed at Rr << 1 and Re << 1. Dimensionless angular speed is defined as Rr = DΩ/ur, where D is the sphere diameter, Ω is the angular speed, and ur is the relative velocity between the particle and fluid. Moreover, the Reynolds number is defined as Re = urD/ν, where ν is the kinematic viscosity.
However, the results of theoretical studies are not reliable beyond the Stokes regime, and the lift coefficient should be obtained experimentally or numerically. In terms of experimental studies, Tusji et al. [6] analyzed the trajectories of an impinging and bouncing sphere on an inclined plate and obtained the Magnus lift force on a rotating sphere at 550 < Re < 1600 and 0 < Rr < 1.4. Oesterle and Dinh [7] used stroboscopic photography technology to study the lift force of a rotating sphere moving at a constant linear and angular velocity in a viscous fluid. A mathematical expression was proposed to estimate the lift coefficient in the range 10 < Re < 140 and 2 < Rr < 12. Macoll [8] performed experiments at 46,000 < Re < 110,000 and reported that the lift coefficient was negative for 0 < Rr < 0.4. Davis [9] performed experiments at a Reynolds number Re = 90,000. Tri et al. [10] and Taneda [11] carried out experiments and studied problems with very large Reynolds numbers.
Numerical simulations do not have most of the experimental challenges, such as measuring uncertainties. Ben Salem and Oesterle [12] performed a numerical investigation, applied different expressions for the lift and drag forces, and calculated the torque in a flow at 0 < Re < 20. Kurose and Komori [13] performed numerical simulations and studied the drag and lift forces acting on a spinning rigid sphere in a homogeneous linear shear flow at 1 ≤ Re ≤ 500. Niazmand and Renksizbulut [14] studied transient wake flow patterns and dynamic forces acting on a spinning spherical particle with non-uniform surface blowing for different Reynolds numbers Re up to 300 and different dimensionless angular speeds Rr up to 1. Kim [15] numerically investigated laminar flow passing a sphere rotating in the transverse direction at Re = 100, 250, and 300 and dimensionless angular speeds of 0 ≤ Rr ≤ 2.4. Poon and Ooi [16] simulated the flow passing a transversely rotating sphere at different Reynolds numbers in the range 500 ≤ Re ≤ 1000 using an unstructured finite volume collocated code. Citro et al. [17] performed direct numerical simulations and three-dimensional global stability analyses in the ranges 150 ≤ Re ≤ 300 and 0 ≤ Rr ≤ 2.4. Leal [18], Drew [19], Magnaudet and Eames [20], Tomiyama and Tamai [21], Loth [22], and Shi and Rzehak [23] analyzed experimental and numerical results under different conditions and drew meaningful conclusions.
The drag coefficient is another important parameter that affects the motion of particles. Based on theoretical analyses, Stokes [24] derived an expression to calculate the drag force. Swamee and Chandra [25] derived an empirical expression to calculate the drag coefficient. Song et al. [26] considered the effect of particle shape and settling orientation and developed a correlation between the drag coefficient and the Reynolds number for spherical and non-spherical particles. Amin and Umut [27] proposed a drag coefficient as a function of nominal particle diameter, gravitational acceleration, ambient fluid kinematic viscosity, and particle shape. Flemmer and Banks [28] and Kelessidis [29] proposed expressions to estimate the drag coefficient of non-spinning particles in a uniform fluid. Cheng [30] performed a review study and compared different expressions for the drag coefficient of spherical particles. Malhotra and Sharma [31] performed an experimental study on the drag coefficient of spherical particles in unbounded and confined surfactant-based shear-thinning viscoelastic fluids. Wang et al. [32] studied the drag coefficient of natural particles with highly irregular shapes. It is worth noting that the drag coefficient of spinning particles differs from that of non-spinning ones. For a particle that spins at a small Reynolds number with linearized inertia terms, Rubinow and Keller [5] showed that the spin does not affect the drag coefficient of a spinning sphere. Kurose and Komori [13], Niazmand and Renksizbulut [14], Kim and Choi [15], Dobson and Poon [33], and Giacobello and Balachandar [34] studied the drag coefficient of spinning particles at high Reynolds numbers.
Reviewing the literature indicates that there have been few experiments on the lift and drag coefficients, and only a few expressions have been proposed to calculate the lift-to-drag ratio of a spinning sphere in the range of 500 < Re < 3000. Therefore, further experiments are required to study the lift and drag coefficients in this range of Reynolds numbers. The main purpose of the present study was to evaluate the drag and lift coefficients of a spinning sphere with an angular speed in the range of 0.149 < Rr < 0.471 and a Reynolds number in the range of 610 < Re < 3472 in a water tank using a high-speed camera. It was intended to develop expressions to calculate the lift and drag coefficients. Furthermore, the lift-to-drag ratio of a spinning sphere was calculated.

The experiments were conducted in a 0.2 m long, 0.2 m wide, and 0.5 m high plexiglass water tank. The velocities and spin speeds of settled spheres were obtained by adjusting the release height of spheres on the orbit. The vertical distance between the top of the tank and the end of the orbit was 50 mm. A high-speed camera system was used to analyze the motion of spinning spheres. The camera system mainly consists of a high-speed camera (EoSens®3CXP, Mikrotron, Unterschleißheim, Germany), a memorizer (AQ8-CXP6D, Mikrotron, Unterschleißheim, Germany), and image processing software (Stream Pix, Norpix, Montréal, Canada). The image resolution was set to 1690 × 1710 pixels. The recording rate of the camera was set to 400 frames per second (FPS) to ensure clear images. The images were analyzed in the image processing software. Figure 1 shows the schematic view of the experimental setup.

The motion of spinning spheres was recorded from the tank side. The camera focused on the vertical plane that was located at the tank centerline. Then, a sufficient number of images were selected using image processing software, and the selected images were further processed by CAD software to calculate the velocity and spinning speed of spheres. To better observe the angular speed of spheres, the surfaces of the spheres were marked. Then, the connection line between the marked dots and the center of gravity of particles was obtained. The angular speed of spheres was calculated by measuring the angle change between the connection line and the gravity over time.
The diameter of spheres D varied from 2.5 mm to 8.0 mm. The densities of the spheres and the fluid were 2390 kg/m3 and 1000 kg/m3, respectively. The velocity of spinning spheres us was in the range of 0.244 m/s to 0.434 m/s. The velocity of the fluid u = 0. The relative velocity between the particle and fluid was in the range of 0.244 m/s to 0.434 m/s. The range of angular speed Ω was from 13.956 rad/s to 223.29 rad/s. The range of dimensionless angular speed Rr was from 0.149 to 3.471. The range of the Reynolds number Re was from 610 to 3472. Table 1 presents the experimental conditions.

3.2.1. Drag Coefficient of a Non-Spinning Sphere

3.2.2. Drag Coefficient of A Spinning Sphere

Writing—Original Draft Preparation, S.Z.; Writing—Review and Editing, X.X.; Validation, G.Z. All authors have read and agreed to the published version of the manuscript.

This research was funded by The National Natural Science Foundation of China, grant numbers 51879227 and 51279170.

All data are provided as tables and figures.

There is no conflict of interest in this study. 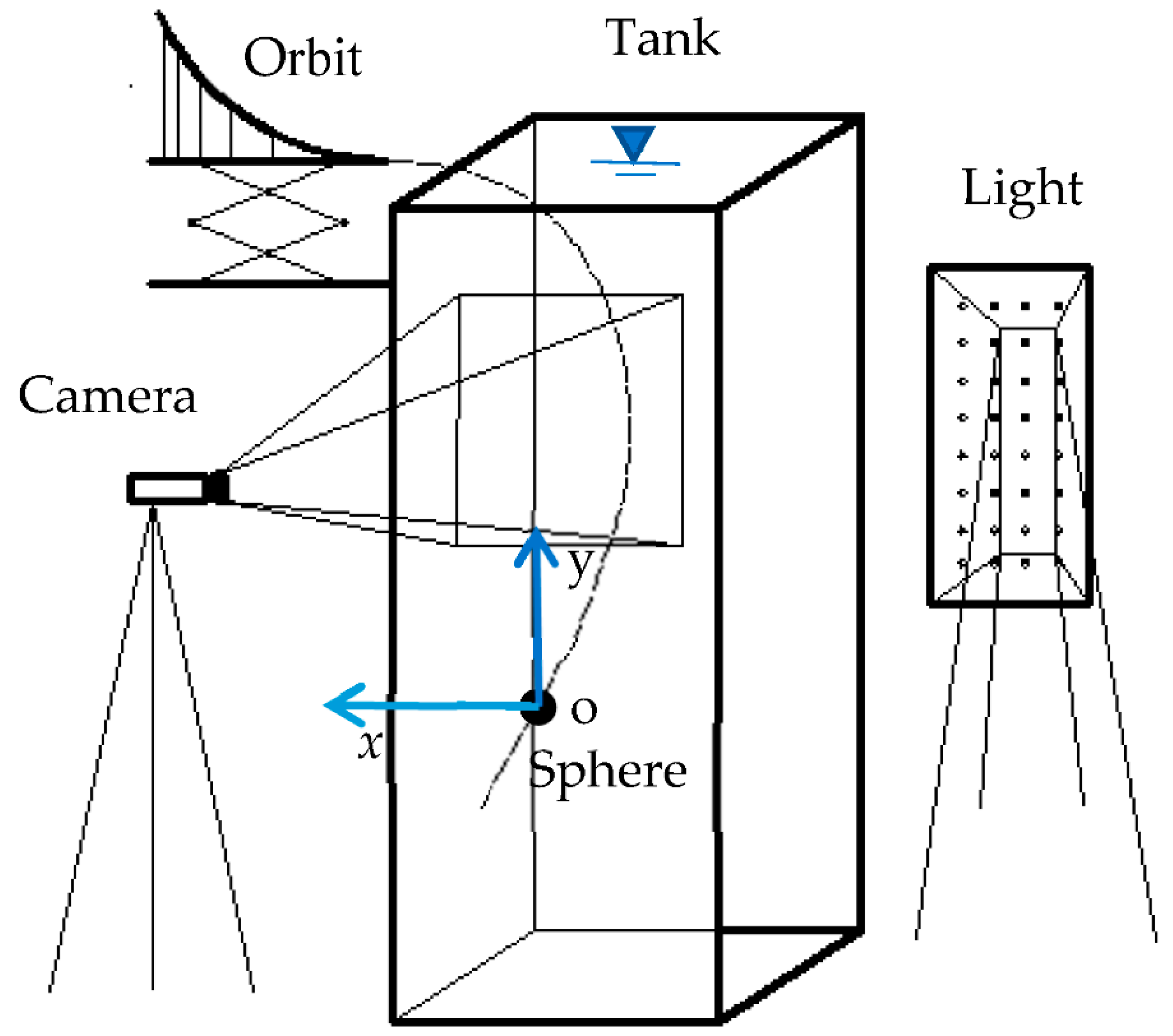 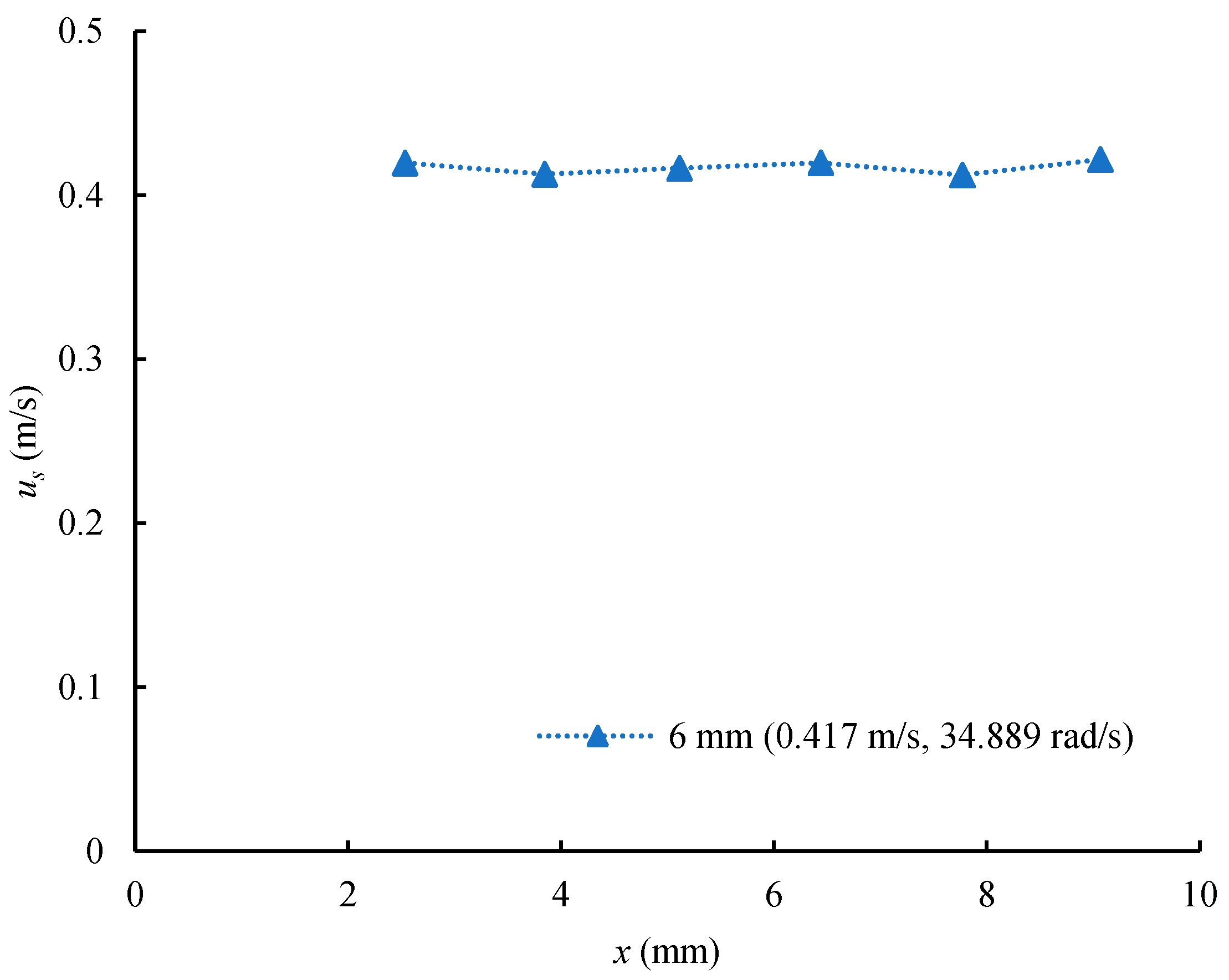 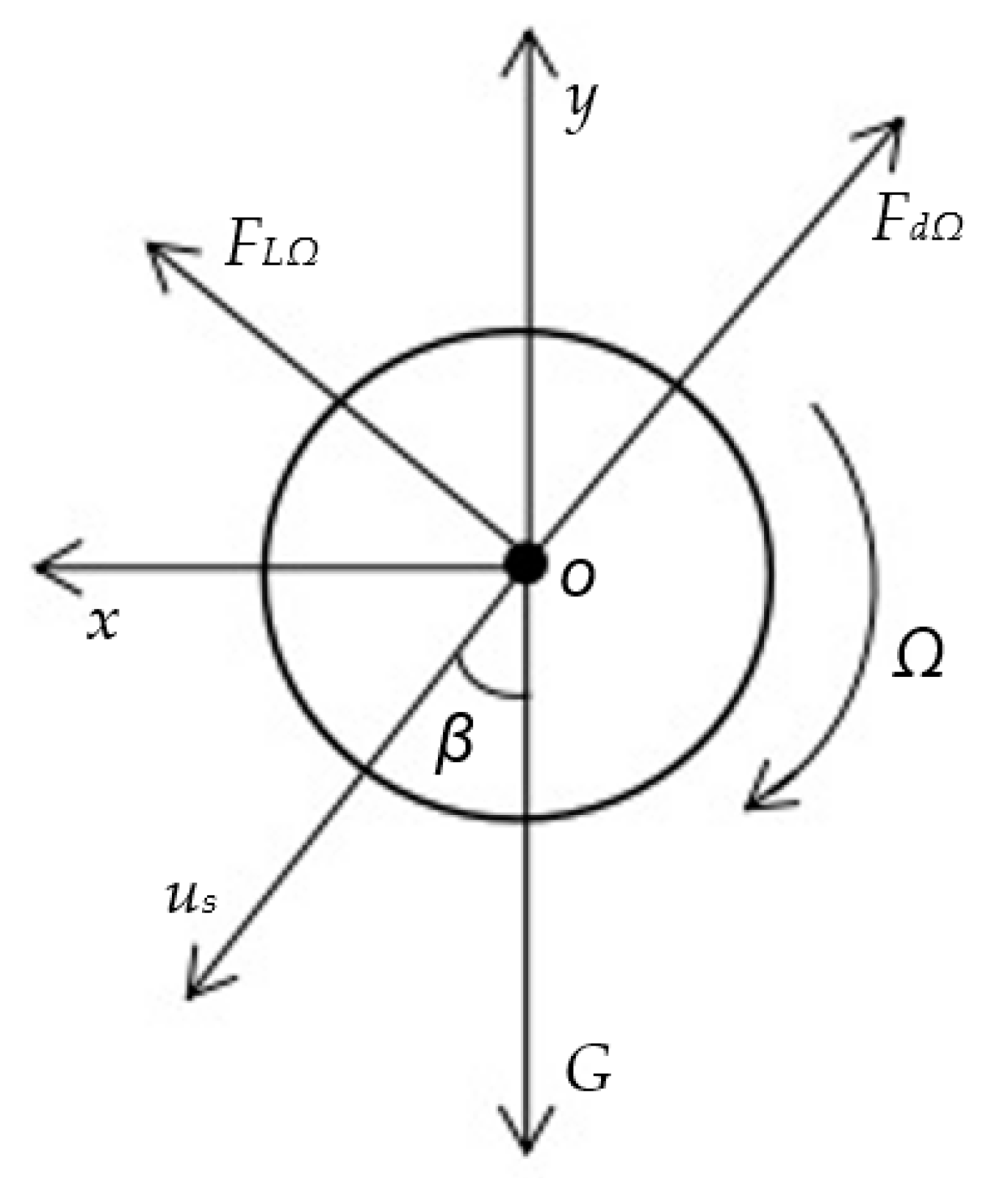 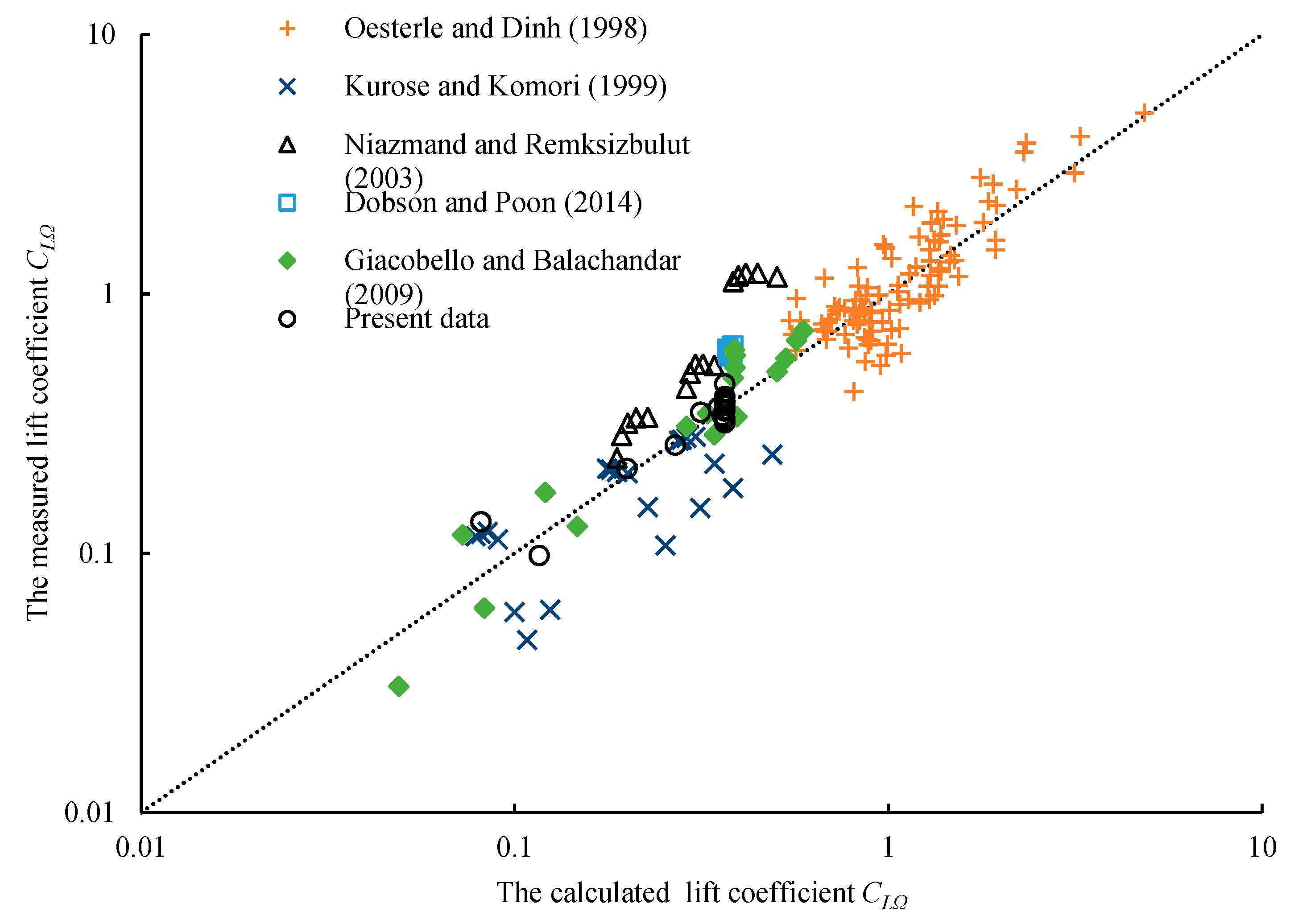