Analysis on the Return Period of “7.20” Rainstorm in the Xiaohua Section of the Yellow River in 2021

Global warming and the acceleration of urbanization have made extreme weather events more serious and frequent in many countries and regions [1,2,3], and the frequency of extreme precipitation is still increasing [4]. From 17 to 23 July 2021, Henan province suffered a rare heavy rain in history, resulting in serious floods; especially, on 20 July, Zhengzhou suffered heavy casualties and property losses [5,6]. The “7.21” rainstorm in Beijing in 2012 caused urban waterlogging [7,8]. A rare heavy rain occurred in Shiyan and Xiangyang in Northwest Hubei from 4 to 6 August 2012 [9], and the maximum 24 h rainfall was 685.5 mm. An extreme rainstorm occurred in Jinan on 18 July 2007 [10]. The phenomenon of “seeing the sea in cities” has occurred repeatedly in major cities of China.
Scholars have fully studied extreme precipitation events in different regions from different timescales [11,12,13]. Manton et al. [14] found that where the number of precipitation days decreased, extreme heavy precipitation events increased. The multivariable hydrological frequency analysis method has been widely used in the risk analysis of urban flood disaster. For example, Zellou and Rahali [15] used the multivariable hydrological frequency analysis method to analyze the encounter risk of precipitation and tide level, the two main disaster-causing factors in the bouregreg estuary of Morocco, and the urban risk. The maximum entropy principle was applied to calculate the return period of extreme precipitation based on the Mann–Kendall test [16,17,18]. The climatic factors of rainstorm and waterlogging in different regions are obviously different, but extreme weather leads to the increase of extreme precipitation events and local flooding frequency, which is a new challenge for different countries, cities, and regions.
The return period refers to an average of hydrological events that can occur in a number of years during long periods [19,20,21]. It is a design standard widely used in the planning program, operation and management of water conservancy, and hydropower projects and civil engineering [22,23,24]. It is mainly determined by the importance of engineering and the result of damage to the project of hydrological events [25,26,27]. Relevant scholars have conducted a lot of research on the return period of rainstorms using different methods, such as the Copula function [28,29,30], multi-mode coupling [31], risk analysis [32], annual maximum sampling [33], random rainstorm transplantation [34,35,36,37], the long-term comprehensive rainstorm formula based on the attenuation rainstorm characteristics [38,39,40,41], and so on. Ding et al. [28] used Copula functions to develop the multivariate joint distribution of annual maximum storms at Heyuan Station of Dongjiang River Basin, and the probability of different joint storm variables and the corresponding return periods were analyzed. The extreme precipitation frequency estimation based on the annual maximum series was revised by using the hydrometeorological regional L-moments method and Chow’s equation for Jiangsu Province [33].
There have been a lot of studies on extreme precipitation and the rainstorm return period, and some experts have also studied the characteristics and causes of extreme rainstorm precipitation in Henan [42,43,44,45]. However, there is no clear understanding of the study on the return period of rainstorms in Xiaohua interval and Yiluo River Basin of the Yellow River. Especially when the current rainfall is the maximum value of the series, it is not clear whether the maximum value is considered when establishing the frequency curve.
For “7.20” rainstorms in the Xiaohua Section, the current rainfall of many stations is the maximum of the series. However, different results about the return period of this heavy rain were provided. Some people believe the return period is about 1000 years, while others believe it is more than 10,000 years.
When the current rainfall of a single station is the maximum of the series, should it be considered in establishing the Pearson-III frequency curve when analyzing rainfall recurrence? What is the difference between considering this value or not? Is this the main reason that causes the different conclusions of the recurrence?
To answer these questions, ten stations with long series rainfall observation data in the study area were selected as representatives. The Pearson-III distribution was adopted to fit the line and return periods of 42 rainfall stations with maximum 24 h rainfall more than 300 mm and 46 rainfall stations with maximum 6 h rainfall more than 100 mm were presented.
Therefore, the main objective of this work is to study the return period when the current rainfall is the maximum value of data series of analyzed rainfall stations. The results can provide technical support for the analysis of the rainstorm return period and flood control operation in the lower Yellow River.

The Xiaohua Section of the Yellow River includes the main stream section from Xiaolangdi to Huayuankou, and the tributaries including Yiluo River and Qin River (shown in Figure 1).
The Yiluo River is an important primary tributary of the Yellow River, and one of the main sources of flood in the lower reaches of the Yellow River [46]. It originates from Luonan, Shaanxi Province, with a basin area of 18,881 km2, involving 21 counties and cities in Henan and Shaanxi provinces. The controlling station of Yiluo River entering the Yellow River is Heishiguan hydrological station, above which the catchment area is 18,563 km2. The main stream, Luohe River, is 446.9 km and the tributary Yihe River is 264.8 km.
The Qin River is a primary tributary of the Yellow River located in the northern region of Xiaolangdi to Huayuankou section, with a basin area of 13,532 km2. It originates from Qinyuan County, Shanxi Province. Wuzhi hydrological station is the controlling station of Qin River entering the Yellow River, above which the catchment area is 12,880 km2 (shown in Figure 1).

The ultimate aim of the hydrology frequency calculation is to determine the design value corresponding to the given design frequency. It stipulates that the line type of the frequency curve generally adopts Pearson-III distribution in the code for calculation of design flood of water conservancy and hydropower project [48].
The P-III curve is an unsymmetrical single-peak and positive partial curve with one infinite end. The probability density function of the Pearson-III curve is written as follows [49,50]: where: is the Gamma function, and are the shape, scale, and position parameters of the P-III distribution (> 0, β > 0).
After the integration, standardized transformation, and simplification for Formula (1), the equation for calculating the design value of the given design frequency can be deduced as: where: where P is the given design frequency, XP is the design value of the given design frequency, and Gammainv is the inverse function of the Gamma function. The macro command programming in Excel was used to find out the mean value, , variation coefficient, CV, coefficient of skew, CS, and Gammainv (1 − p, alpha and beta) of series (i = 1, 2, …, n), and to draw the Pearson-III frequency curves of the series (XP). The parameters of mean, CV, and CS/CV were determined by the estimation of the line-fitting method. According to Formula (2), the frequency corresponding to the rainfall or peak discharge was calculated.

The continuous heavy rain process occurred in the section from Xiaolangdi to Huayuankou on 18 to 22 July. There were 70 rainfall stations with cumulative rainfall over 400 mm. The number of stations with daily rainfall exceeding 50 mm was up to 762, and the maximum daily rainfall was 454.5 mm in Fenggou station. The top 20 daily rainfall events occurred on 20 July and 19 July, as shown in Table 1.
Affected by rainstorm, the peak flow of Heishiguan station in Yiluo River was 1050 m3/s at 3:00 on 21 July, and that of Wuzhi station in Qin River was 1510 m3/s at 3:12 on 23 July, which was the largest peak flow since 1982. After confluence of floods in Yiluo River, Qin River, and the Xiaohua main stream, the peak flow of Huayuankou station of the Yellow River reached 3650 m3/s at 1:24 on 21 July (shown in Figure 3).

3.2. The Comparison of Historical and Current Maximum 24 h Rainfall

3.3. The Analysis of Rainfall Isogram

The rainstorm covered the main stream of Xiaohua section, the lower region of the intersection of Yihe River and Luohe River, and the middle and lower reaches of Qinhe River.
The heavy rainstorm center was Liuhe station in the main Yellow River with the rainfall of 860 mm. The average rainfall in Xiaohua section was 180.9 mm on 18 to 22 July. It reached 395.1 mm in the main stream of the Xiaohua section of the Yellow River, while it was 315.7 mm in the region from Longmenzhen, Baimasi, to Heishiguan. It was 266.4 mm in the region from Runcheng to Wulongkou of Qinhe River, and 266.1 mm above Shanluping hydrological station in Danhe basin (shown in Figure 6 and Table 2).

3.4. The Frequency Curve and Return Period

This research was funded by the National Key Research and Development Program of China grant number 2021YFC3201101. 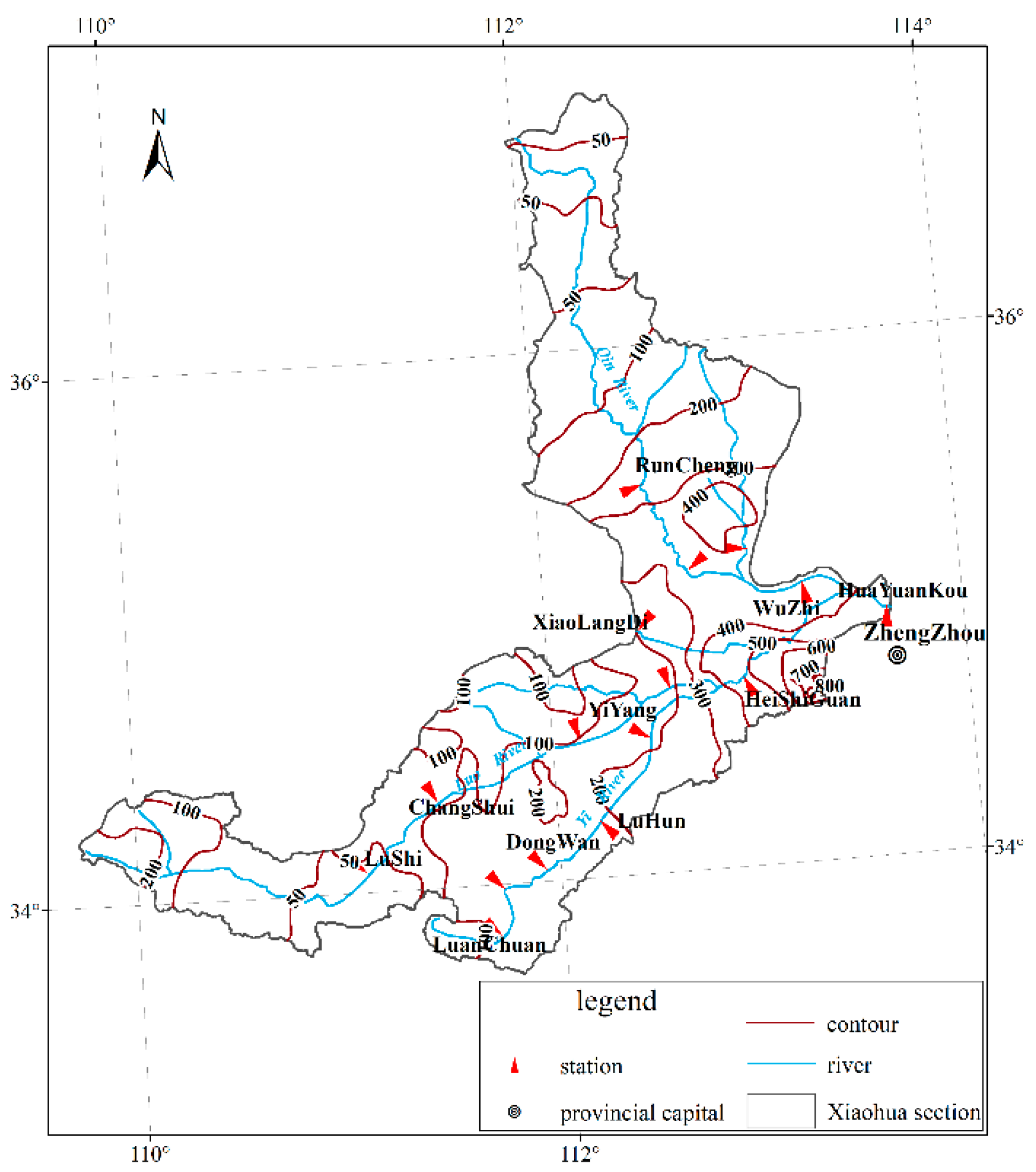