Radiocarbon Dating and Stable Isotopes Content in the Assessment of Groundwater Recharge at Santiago Island, Republic of Cape Verde
Next Article in Special Issue

Attribution Analysis of Runoff in the Upper Reaches of Jinsha River, China
Previous Article in Journal

Flow at an Ogee Crest Axis for a Wide Range of Head Ratios: Theoretical Model
Previous Article in Special Issue

Response of Domestic Water in Beijing to Climate Change

The use of check dams is a common strategy to reduce soil erosion in the Mediterranean headwaters. However, the effects of these control works on water flow rates and sediment yields have been scarcely investigated under possible scenarios of climate and land-use changes. On this regard, the use of hydrological models, such as SWAT, provide reliable hydrological predictions under variable environmental conditions. To fill this gap, this study has evaluated the effectiveness of check dams on the hydrological response of a forest headwater in Calabria (Southern Italy) in comparison with an unregulated subcatchment with very similar environmental conditions. In this regard, the effects of different combined scenarios of climate change (through three GCMs and two RCPs applied to a time period of the next 80 years) and land use (forest, pasture, and cropland) on water flow rates and sediment yields in the two headwaters were analysed using the SWAT model. The SWAT model was first calibrated in a third headwater with very similar climatic, soil, and land-use conditions, and this verification showed a satisfactory prediction capacity of water flow rate. The water flow rate prediction capacity of the model was satisfactory (coefficients of determination and efficiency of Nash and Sutcliffe equal to 0.71 and 0.67, respectively, and percent bias of 14.9%). No significant differences were detected for the water flow rates and sediment yields between the two subcatchments (with or without check dams) among the different land-use and climate change scenarios. This was linked to the low hydrological response of both headwaters to the forcing actions, which influenced the low effectiveness of the control works. SWAT estimated higher values of both mean and maximum values of water flow rates and sediment yields under RCP2.6 compared with RCP8.5. Both water flow rates and sediment yields were predicted to be very low under all climate and land-use scenarios. The regulated headwater with check dams was predicted to always produce more runoff and erosion compared with the subcatchment without check dams. The increases were predicted to be up to 60% for the maximum flow rate and 30–35% for the sediment yield in forest land use under RCP2.6. Although there was a limitation in this study due to the lack of validation of the erosion data (due to unavailable records of sediment yield), this study demonstrated how the use of check dams in headwater catchments may be not effective for soil conservation purposes several decades after their installation in Mediterranean semiarid areas, where the water flow and erosion rate are limited. View Full-Text
Keywords: soil conservation; sediment yield; water flow rate; forest; pasture; cropland; representative concentration pathway; Global Circulation Model soil conservation; sediment yield; water flow rate; forest; pasture; cropland; representative concentration pathway; Global Circulation Model
►▼ Show Figures 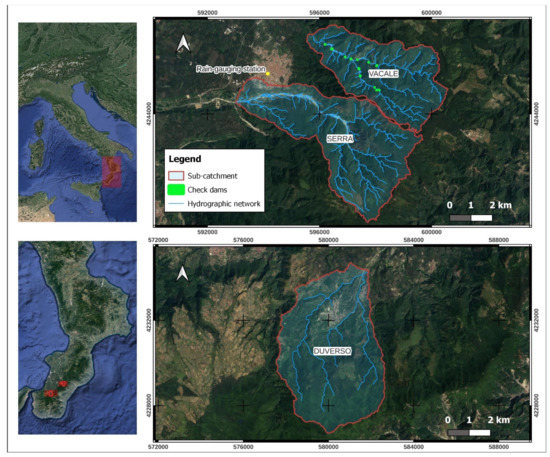