This article critically evaluates the conventional Kanchan Arsenic Filter (KAF) in order to determine the main reasons for its reported poor performance. The KAF was introduced in 2004 in Nepal and makes use of non-galvanized nails as a Fe0 source for As removal. As early as 2009, the KAF was demonstrated to be ineffective for As removal in many cases. This was unambiguously attributed to the Fe0 layer which is placed on top of a sand filter instead of being incorporated into a sand matrix. Despite this conceptual mistake, the conventional KAF has been largely distributed in Asia, and recent articles have assessed its sustainability. This study reiterates that the suitability of the technology, rather than its sustainability, should be addressed. Evidence shows that the KAF has the following design limitations: (i) uses iron nails of unknown reactivity, and (ii) operates on the principle of a wet/dry cycle. The latter causes a decrease in the corrosion rate of the used nails, thereby limiting the availability of the iron corrosion products which act as contaminant scavengers. Taken together, these results confirm the unsuitability of the conventional KAF. Besides correcting the design mistakes, more attention should be paid to the intrinsic reactivity of the used iron nails, including using alternative Fe0 materials (e.g., iron filings, steel wool) for filters lasting for just 6 or 18 months. Specific design considerations to be addressed in the future are highlighted. View Full-Text
Keywords: arsenic removal; groundwater pollution; household water filter; public health; zero-valent iron arsenic removal; groundwater pollution; household water filter; public health; zero-valent iron
►▼ Show Figures 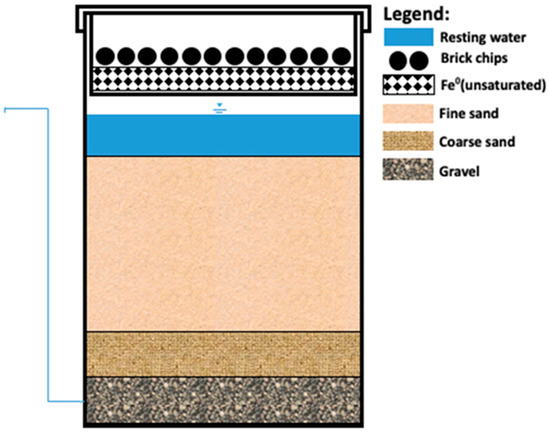