Effects of Different Irrigation Modes on the Growth, Physiology, Farmland Microclimate Characteristics, and Yield of Cotton in an Oasis

In order to determine the effects of different water-saving irrigation techniques on physiological growth, farmland microclimate, and yield of cotton (Gossypium Spp.), a two-year field experiment was carried out in an oasis area of Northwest China, and three irrigation methods were tested, including on-film irrigation (T1), under-film drip irrigation (T2), and automatic irrigation (T3). The results showed that the relative humidity, plant height, leaf area, stem thick, and photosynthetic index with the T3 treatment were significantly higher than those with T2 and T1. The air and soil temperature with T3 (except seedling stage) were considerably lower than those with T2 and T1. According to the fitting and statistical analysis of each index and yield, except for air and soil temperature, the other indices were positively correlated with yield. Based on the analysis of each index, the T3 treatment had the most significant regulatory effect on cotton’s physiological growth and farmland microclimate. Compared with T1, the irrigation amounts of T2 and T3 decreased by 16.43% and 25.90%, but the yield increased by 38.96% and 46.28%, respectively. The automatic irrigation strategy showed significant advantages in water saving and yield increase, which could provide some reference for cotton drip irrigation in similarly arid areas. View Full-Text
Keywords: irrigation mode; Gossypium spp.; physiological growth; farmland microclimate; yield; Xinjiang irrigation mode; Gossypium spp.; physiological growth; farmland microclimate; yield; Xinjiang
►▼ Show Figures 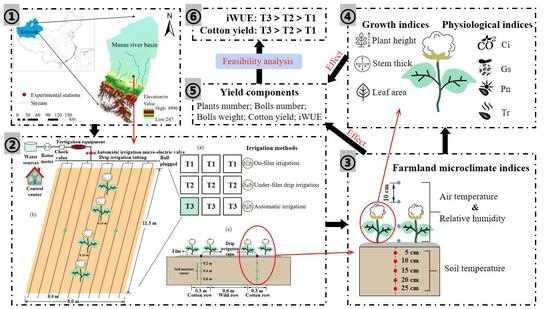