Chemical and Isotopic Tracers for Characterization of the Groundwater in the Heterogeneous System: Case from Chichaoua-Imin’tanout (Morocco)
Previous Article in Journal

Can Precise Irrigation Support the Sustainability of Protected Cultivation? A Life-Cycle Assessment and Life-Cycle Cost Analysis

Urbanization and population growth have led to urban areas with a substantial concrete surface compared to adjacent rural areas, creating challenges regarding fresh food, water security, and the need for agricultural land. Climate change affects the rainfall pattern and ground water in urban areas, so the gradual growth of urban rooftop agriculture (URTA) is an increasing trend for the owners of residential buildings. URTA is increasing in the form of private initiatives, but without consideration of efficient water management techniques and application of other related inputs. URTA differs substantially from traditional agriculture in terms of sunshine, thermal regime, the moisture dynamics of a concrete roof top, etc. Considering these aspects of URTA, an effective, efficient, science-based and economically viable irrigation method is necessary to popularize this approach and consequently increase the productivity of crops. With this in mind, the drip irrigation method is considered for the cultivation and determination of water productivity for selected species of plants such as the Bottle Gourd, Tomato, Chili, and Brinjal in the URTA, which was also compared to the traditional irrigation approach. This is why groundwater and green (grey and rain) water were considered as the source of irrigation during the dry season, based on the daily crop evapotranspiration and moisture content of the plant growing medium. For this reason, ET0 of the selected crops was measured using the CROPWAT 8.0 model. The results of this study revealed that the optimum irrigation water requirement of any crop in URTA is around 54% access (ETc), and 46–64% of access irrigation water is used by the traditional method compared to the drip irrigation method. The study reported that with drip irrigation with potable water, the yield was increased by 21.43–22.40% and rain and grey-water also increased yield by 31.87–33.33% compared to container and traditional pipe irrigation. It was also found that the water qualities of mixed water (grey and rainwater) are in an acceptable range limit for irrigation. As a result, urban planners, city dwellers, and researchers can formulate appropriate plans to cultivate different species of plants through this water saving irrigation method using green water, and should explore the concept of water-smart URTA technologies as organic inventions embedded in these results. View Full-Text
Keywords: urban rooftop agriculture (URTA); water productivity in URTA; water use efficiency; green water (gray water and rainwater) harvesting; water quality for irrigation urban rooftop agriculture (URTA); water productivity in URTA; water use efficiency; green water (gray water and rainwater) harvesting; water quality for irrigation
►▼ Show Figures 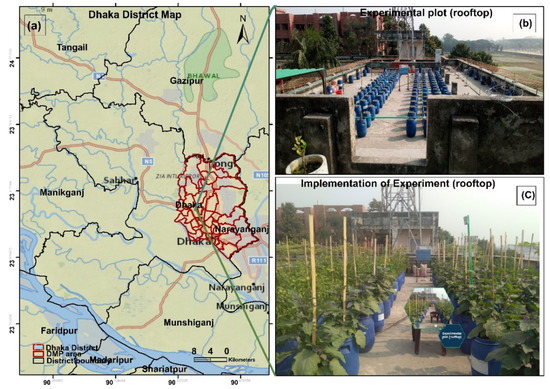