Phytoplankton assemblage dynamics are sensitive to biotic and abiotic factors, as well as anthropogenic stressors such as eutrophication, and thus are likely to vary between lakes of differing trophic state. We selected four lakes in Washington State, USA, ranging from oligo- to hypereutrophic, to study the separate and interactive effects of enhanced nutrient availability and zooplankton grazing on phytoplankton net growth rates and overall microplankton (phytoplankton and microzooplankton) assemblage structure. We collected water quality and plankton samples monthly in each lake from May to October 2014, and also conducted laboratory incubation experiments using ambient plankton assemblages from each lake with amendments of zooplankton grazers (5× ambient densities) and nutrients (Nitrogen + Phosphorus) in June, August, and October. In each set of monthly experiments, nested two-way ANOVAs were used to test the effects of enhanced grazers and nutrients on net chlorophyll a-based phytoplankton growth rates. Nested PERMANOVAs were used to test the effects of each factor on microplankton assemblage structure. Enhanced grazing reduced phytoplankton net growth in oligotrophic Cle Elum Lake and oligo-mesotrophic Lake Merwin in August (p < 0.001) and Merwin again in October (p < 0.05), while nutrient enhancement increased phytoplankton net growth in Lake Merwin in June (p < 0.01). Changes in microplankton assemblage composition were not detected as a result of either factor, but they were significantly different between sites (p < 0.001) during each month, and varied by month within each lake. Significant effects of both enhanced grazers and nutrients were detected in systems of low, but not high, trophic state, although this varied by season. We suggest that it is critical to consider trophic state when predicting the response of phytoplankton to bottom-up and top-down factors in lakes. View Full-Text
Keywords: nitrogen; phosphorus; phytoplankton; zooplankton; top-down; bottom-up nitrogen; phosphorus; phytoplankton; zooplankton; top-down; bottom-up
►▼ Show Figures 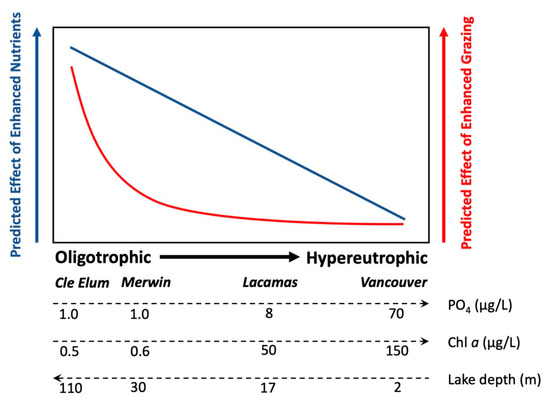