Developing accurate stream maps requires both an improved understanding of the drivers of streamflow spatial patterns and field verification. This study examined streamflow locations in three semiarid catchments across an elevation gradient in the Colorado Front Range, USA. The locations of surface flow throughout each channel network were mapped in the field and used to compute active drainage densities. Field surveys of active flow were compared to National Hydrography Dataset High Resolution (NHD HR) flowlines, digital topographic data, and geologic maps. The length of active flow declined with stream discharge in each of the catchments, with the greatest decline in the driest catchment. Of the tributaries that did not dry completely, 60% had stable flow heads and the remaining tributaries had flow heads that moved downstream with drying. The flow heads were initiated at mean contributing areas of 0.1 km2 at the lowest elevation catchment and 0.5 km2 at the highest elevation catchment, leading to active drainage densities that declined with elevation and snow persistence. The field mapped drainage densities were less than half the drainage densities that were represented using NHD HR. Geologic structures influenced the flow locations, with multiple flow heads initiated along faults and some tributaries following either fault lines or lithologic contacts. View Full-Text
Keywords: intermittent stream; topographic wetness index; drainage area; drainage density; hydrography intermittent stream; topographic wetness index; drainage area; drainage density; hydrography
►▼ Show Figures 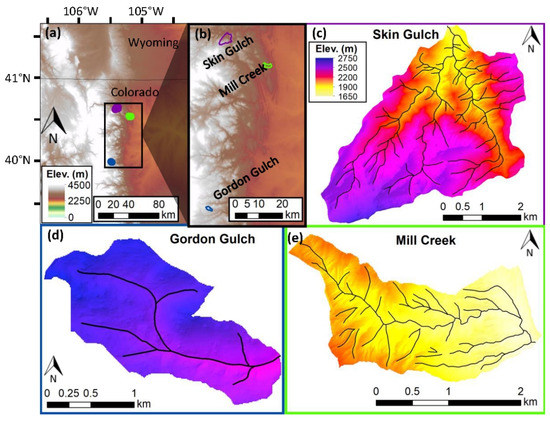