The regulation of river flow in the Volga basin has caused irreversible changes to aquatic ecosystems. The transformation of the Volga into a cascade of hydraulic structures with a non-flow regime has resulted in a decrease in depth and flow, and an increase in the temperature and concentration of chemical elements, which has induced the process of eutrophication. The change in the species diversity of aquatic organisms under conditions of intense eutrophication was studied on models of water bodies from the Volga basin; the Kostroma section of the Gorky reservoir (Kostroma spill and the middle river section), and lakes Galichskoe and Chukhlomskoe were studied. Rheophilic biocenosis was replaced by a limnophilic one, the migration paths of fish were disrupted, and population characteristics were changed. In accordance with environmental conditions, the level of primary production and the calculated Carlson trophic index (TSI) and Broth-proposed index (ITS) (1987), the water bodies of the northern part of the upper Volga region are classified as follows: the middle river section of the Gorky reservoir is mesotrophic-eutrophic (TSI = 55.2, ITS = 16.2); the Kostroma spill is eutrophic with a tendency to hypertrophy (TSI = 67.4, ITS = 6.8); Lake Galichskoe is eutrophic with a tendency to dystrophy (TSI = 63.2, ITS = 8.4), and Lake Chukhlomskoe is hypertrophic with a tendency to dystrophy (TSI = 77.4, ITS = 8.0). In addition, frequent fluctuations in water level, reaching 1 m, have had an adverse effect on inhabitants of the littoral zone including the spawning fish, which may lead to disappearance of some of the region’s most sensitive species. View Full-Text
Keywords: Volga basin; hydro construction; environmental parameters; eutrophication; hydrobionts Volga basin; hydro construction; environmental parameters; eutrophication; hydrobionts
►▼ Show Figures 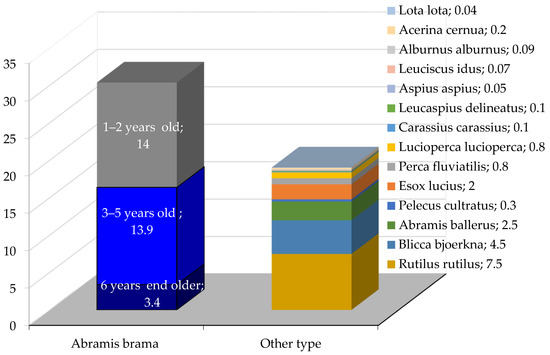 Bernard Gałka
0000-0002-4555-9460
Zoom | Orient | As Lines | As Sticks | As Cartoon | As Surface | Previous Scene | Next Scene
We use cookies on our website to ensure you get the best experience. Read more about our cookies here.
Accept
We have just recently launched a new version of our website. Help us to further improve by taking part in this short 5 minute survey here. here.
Never show this again