Validation of an In-Situ Observation Method for Nonpoint Source Pollution in Paddy Fields: A Case Study of a Beijing Paddy Field
Next Article in Special Issue

A Case Study of a Prymnesium parvum Harmful Algae Bloom in the Ohio River Drainage: Impact, Recovery and Potential for Future Invasions/Range Expansion

Inland waters provide valuable ecosystem goods and services and are intrinsically linked to downstream coastal areas. Water quality impairments that lead to harmful algal blooms damage valuable commercial and recreational fishing economies, threaten food security, and damage already declining native species. Prymnesium parvum is a brackish water golden alga that can survive in salinities less than 1 ppm and when it blooms it can create toxins that kill aquatic life. Blooms have been documented globally including 23 U.S. states. We report a case study of an aquatic life kill associated with P. parvum in Dunkard Creek (WV-PA, USA), in the Ohio River Drainage. We document the immediate impact to aquatic life and responses of the aquatic community ten years post-kill. Most fish species returned within a year. Excellent connectivity to unimpacted tributaries and a river downstream likely aided the reestablishment of most species, although some had not reached pre-kill abundances after ten years. Mussel taxa did not recover despite significant efforts to relocate adult mussels and stocking of host fish inoculated with glochidia; probably due to other water quality impairments. Given the potential for lateral transport of P. parvum via industry and natural vectors we conducted an ecological risk assessment mapping the spatial extent of U.S. waters that could be threatened by golden algae colonization and blooms using a national water quality database and a state database. Overall, about 4.5% of lotic systems appeared to have some level of risk of harboring P. parvum, making them at risk for potential golden algae blooms in the face of increasing salinization and eutrophication of freshwaters. View Full-Text
Keywords: HAB; golden algae; Prymnesium parvum HAB; golden algae; Prymnesium parvum
►▼ Show Figures 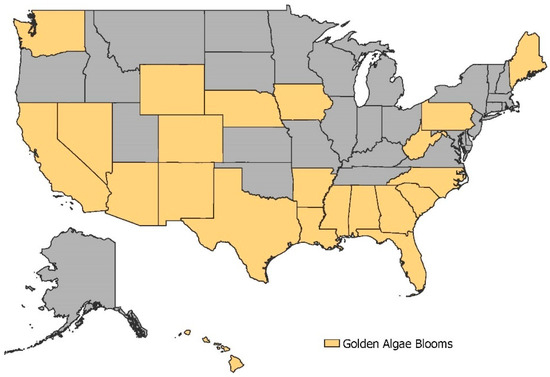