An Assessment of Lake Ecology on the Basis of the Macrobenthos Multi-Metric Index (MMI) in 11 Lakes in the Western Region of Jilin, China

The western region of Jilin Province is located at the northeastern part of China. A large number of lakes are distributed in this region, where is one of five large lake regions within China, supporting both drinking water and agricultural water. The frequent human activities and scarce rainfall in this region have resulted in weaker lake connectivity and enrichment of the pollutants within the lakes. The lake ecosystems in the region have been degraded to varying degrees, and thus it is necessary to assess its ecological health. Macrobenthos multi-metric index (MMI) is a mature ecological health assessment method that has been widely used in the lake ecosystem assessment all over the world. However, it has not been well developed for assessing the lake water ecosystem in China. In this study, 11 lakes affected by human activities to different degrees were selected as the research objects. They were categorized into three types on the basis of trophic level. Through the comparison and screening of different biological indicators among different lake types, we selected appropriate indicators to construct the MMI. Four core indicators were selected from 58 candidate indicators to construct the MMI: the total number of taxa, Simpson index, percentage of Diptera + Mesogastropod, and percentage of pollution-intolerant species. MMI could distinguish lakes that are seriously and slightly disturbed by humans. The results of regression analysis also showed that the degree of lake eutrophication caused by human activities had a significant correlation with MMI, effectively explaining its changes. MMI can characterize the disturbance and influence of eutrophication on macrobenthos. The results of MMI can also be affected by the land use type and the coverage of aquatic vegetation around the lake, which are important factors affecting the ecological health of the lake. Research on the application of MMI method to assessment of the ecological health of lakes is very rare in Northeast China. This research can provide supplementary information beyond the traditional water environment assessment for the formulation of management strategies. View Full-Text
Keywords: lakes; ecological health; macrobenthos; macrobenthos multi-metric index (MMI); eutrophication; water environment assessment lakes; ecological health; macrobenthos; macrobenthos multi-metric index (MMI); eutrophication; water environment assessment
►▼ Show Figures 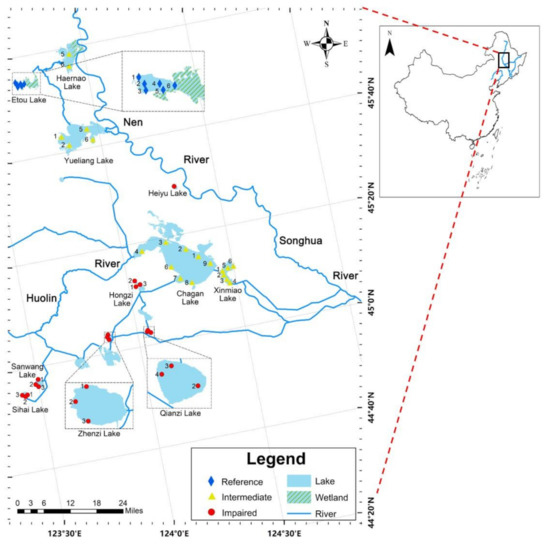