Groundwater Isotopes in the Sonoyta River Watershed, USA-Mexico: Implications for Recharge Sources and Management of the Quitobaquito Springs

Thermal springs are natural hydrogeological features which are highly affected by local volcanism or tectonic activity. Thermal springs are the best source of hydrothermal energy to heat houses and aid in the recovery of skin diseases. However, they consist of some heavy and trace metals such as arsenic, lead, zinc, copper, iron, and so forth. Somehow, the thermal springs of central Bamyan have become contaminated with some essential trace elements. Thus, this study was conducted to assess and determine the number of these trace elements in the thermal springs. To achieve these objectives, a preliminary survey, water sampling, and in situ measurements of physicochemical parameters were conducted in research areas. All the collected water samples were analyzed chemically to determine the amount of trace elements, including arsenic, barium, copper, iron, manganese, and zinc. The study shows that temperature ranged from 16 to 32 °C, while the average pH value was 6.25. Almost all of the trace elements showed an extremely high value of electrical conductivity (average: 5713 µS/cm) and significantly high total dissolved solids (average: 3063 mg/L). The average value of chloride was 797 mg/L, which is dramatically higher than standard values. In regard to trace element concentration, almost all thermal springs were heavily contaminated with arsenic and it was recorded as 100 µg/L in the eastern part of central Bamyan. The average amounts of barium, copper, iron, manganese, and zinc were 4.14, 6.05, 1.90, 1.76, and 0.74 mg/L, respectively. In conclusion, the water of the thermal springs of central Bamyan are not suitable for human consumption because of the significant amount of trace elements as well as the high-water quality index value. Using these springs for drinking and irrigation purposes has been deemed inappropriate. View Full-Text
Keywords: thermal spring; trace element; arsenic; Bamyan; central Afghanistan; contamination thermal spring; trace element; arsenic; Bamyan; central Afghanistan; contamination
►▼ Show Figures 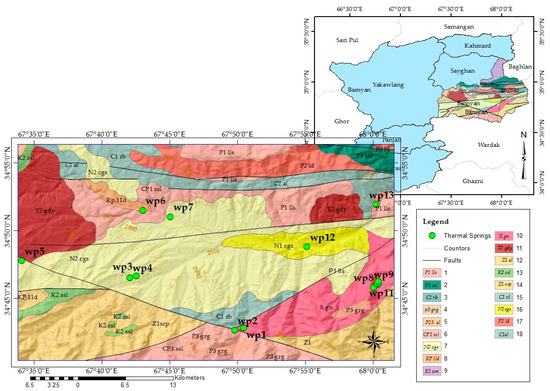