Aquifer Response to Stream-Stage Fluctuations: Field Tests and Analytical Solution for a Case Study of the Yangtze River in Wuhan, China

Surface water and groundwater do not exist in isolation in the hydrologic cycle; rather, all surface water is often hydraulically connected to groundwater. Over the past few decades, with population growth, human water demand has grown, and the importance of water utilization and conservation has been gradually realized. Simultaneously, many scientists have come to recognize that the effective management of limited water resources cannot be implemented without realistically quantifying the interaction between surface water and groundwater [1,2,3].
Similarly, hydrological units such as rivers, lakes, wetlands, and streams are not isolated. Groundwater is inextricably linked to river development, with the flow of rivers being the result of a complex process that relies on the interaction of hydrological, geological, ecological, and human factors. The river–aquifer interface represents a vital location for the exchange of mass, energy, and chemicals between surface water and groundwater. The reciprocal flow of water and the interaction pattern of water flow depend mainly on rainfall inputs, water head changes, and the permeability of the underlying layer [4]. Most studies focus more on the interaction of adjacent aquifers with rivers in arid and semi-arid regions, where streams are often disconnected from underlying aquifers [5,6]. For high-quality and abundant water, groundwater extraction wells are often located near rivers, and the reduction in groundwater flow to rivers due to extraction has led to river depletion. A recent study has shown that increased groundwater withdrawals across the United States over the past 100 years have had a significant impact on the hydrologic cycle through reductions in flow and evapotranspiration at the watershed scale [7,8].
Analytical [9,10,11,12] and numerical [13,14,15,16,17] methods have been used to model river– aquifer interactions for a long time. Intaraprasong and Zhan [18] grouped current research on river–aquifer interactions into two parts: (1) study on the flow–aquifer flow rate caused by pumping wells [9,10,19,20,21] and (2) study of aquifer response to flow-level fluctuations, not involving any pumping wells [20,22,23,24]. For group one, Sophocleous et al. [15] compared stream–aquifer flow rates induced by fully permeable wells in the vicinity of a fully permeable stream without a streambed. For group two, Moench and Barlow [25] and Barlow et al. [26] proposed several solutions for transient hydraulic interactions occurring between a fully permeable river and a confined, leaky, or subsurface aquifer to calculate the aquifer head, riparian infiltration rate, and riparian storage as a response to river stage fluctuations and basin-wide recharge or evapotranspiration. However, most models perform poorly when dealing with local-scale hydraulic processes at the interface of rivers and aquifers [27].
However, for areas with abundant rainfall, the impact of river flooding on adjacent aquifers cannot be ignored. The Yangtze River, the third-largest river in the world, has the world’s largest amount of hydroelectric energy. Located in a subtropical monsoon climate zone, the Yangtze River flows through three major morphological terraces from the western plateau to the eastern coast, with an altitude difference of over 6000 m [28,29,30]. Influenced by the monsoon climate, the Yangtze River basin produces excessive rainfall and frequent floods every summer, causing huge economic losses [31,32]. Wuhan is located on the first terrace of the Yangtze River, and the surface water–groundwater interaction process in its riverine area is accompanied by material and energy exchange between the external boundary and the aquifer. Due to the strong dynamic changes in the hydraulic gradient, the surface water–groundwater interaction pattern in the riverine region of the first terrace is dominated by a local groundwater flow system, which is driven by the hydraulic gradient, and the characteristics of the water-bearing medium affect the intensity of the interaction [33]. In terms of the river–aquifer interactions for the Yangtze River in the Wuhan area, most related studies focus on the hydraulic properties of sediments; the conditions of groundwater storage; the groundwater seepage path; the trends and dynamics of groundwater level changes; and the stages, periodic patterns, and sudden changes in water level experienced by the Yangtze River in different periods [34,35,36,37,38,39,40,41,42].
From the above analyses, it should be noted that most models perform poorly when dealing with local-scale processes at the interface of rivers and aquifers. Thus, this paper aims to propose a new water-level fluctuation model for the Yangtze River and to modify the common analytical formula used to predict the variation law of confined water levels in the riverside area more accurately. In the following sections, we describe the field hydrological monitoring tests we conducted, including an overview of the site, the monitoring plan, and the results in Section 2. In Section 3, a new equation for stream-stage fluctuations is proposed on the basis of monitoring data from the Yangtze River. We derive a theoretical flow model to predict the confined groundwater head and verify the proposed model in Section 4. Summaries and the main conclusions are drawn in the last part of the paper.

The groundwater monitoring system in this study was mainly arranged in the Houhu area of Wuhan, with a work area of about 65 km2, as shown in Figure 1a. The geomorphological unit in the working area is mainly the first and second terrace accumulation plains of the Yangtze River. The first terrace is mainly located along the Yangtze River, with elevations of 18 to 22 m. The second terrace is mainly located around the third annular urban road, with elevations of 22 m to 26 m. The bedrock in the study area is deeply buried, and the upper overburden layer is composed of quaternary sediment. Due to the potential flow heterogeneity, the overburden layer presents a typical “binary structure”, with the stratigraphic characteristics being fine at the top and coarse at the bottom [43]. The stratum of the site from top to bottom is a mixture of backfill (Qml), clay (Q4al), silty sand (Q4al), medium–coarse sand (Q4al), strong weathering mudstone, and medium weathering mudstone (S). Figure 2 showed the typical geological engineering profile of the study area.
The main types of groundwater in the region are perched water, phreatic water, and confined water. Our actual monitoring objects were mainly perched water and confined water.

The groundwater monitoring system in this study was arranged with 60 water-level-monitoring wells, including 30 points for perched groundwater and 30 points for confined water. The total length of hydrogeological drilling was 3734 m. The monitoring points were mainly selected in urban public green areas, parks, residential areas, and other open areas. In the key monitoring area for land subsidence prevention and control, the drilling density was increased and the regional control monitoring wells were arranged. As the secondary key monitoring area, the wells’ density of the comprehensive prevention and control area of land subsidence was relatively small. The distribution of the monitoring points is shown in Figure 1b.
A reasonable well depth is a basic requirement for monitoring well design. It is designed mainly based on hydrogeological conditions and the dynamic changes om the target aquifer. According to the design specification, when the target aquifer for groundwater monitoring is the pore confined water from a quaternary system, the monitoring wells are constructed in accordance with the complete well, drilled through the aquifer and into the bedrock for 3 m; when the target aquifer is the perched groundwater, it should be drilled through the whole fill layer and into the lower water-insulating clay layer for 5 m. Take the monitoring well WH-SW001 in Wangjiadun Park, Jianghan District, Wuhan City, as an example. This well was a confined water level monitoring well. Based on the hydrogeological conditions at the point, the designed hole depth was 50 m, and the structural design of the monitoring well is shown in Figure 3. Borehole protection facilities need to be designed appropriately according to the actual site conditions and the surrounding environment.
The monitoring methods were divided into automatic monitoring and manual monitoring. After the construction of monitoring wells was completed, manual monitoring was carried out in the early stage. The monitoring results were obtained every five days. After the installation of automatic monitoring equipment (YLN—Z1301 groundwater level monitor), automatic monitoring was carried out. The monitoring frequency at this time was every four hours, and the monitored data about the water level and water temperature were automatically transferred to the equipment server at 8:00 every morning.

The time function of the Yangtze water level’s change g(t) (Equation (1)) was employed into the analytical solution (Equation (13)) to calculate the fluctuation of the confined water level at different distances to the river. Due to the limited number and location of confined water monitoring wells in the study area and the missing data due to damage to the equipment during monitoring, after comparing the integrity of the observed data, the SW063, SW016, and SW025 monitoring wells on Profile 1 were finally selected, which were 600 m, 800 m, and 1700 m away from the river, respectively. The parameters assigned for calculation are shown in Table 3.
The calculated results are shown in Figure 9, where (a), (b), and (c) present the results of comparison between the calculated results and observed data at 600 m, 800 m, and 1700 m, respectively. The values of h0 for are 15 m, 14.5 m, and 13 m, respectively. The blue line represents the results calculated by the classical Equation (10), and the red line represents the results calculated by the proposed Equation (14). As can be seen in Figure 9, the results computed by Equation (14) match better with the monitoring data than those computed by Equation (10). The relative errors (calculated value minus monitored value, the result is taken as absolute value and divided by monitored value) of Equation (14) for are 8.88%, 8.71%, and 6.14%, which are much smaller than those of Equation (10), which are 19.15%, 17.67%, and 41.33%, respectively. The prediction error has been greatly reduced (by about 18%) from 26% to 8%. This indicates that the proposed Equation (14) is valid for predicting the response of the groundwater head of the confined aquifer to stream-stage fluctuation.

All individuals included in this section have consented to the acknowledgement. 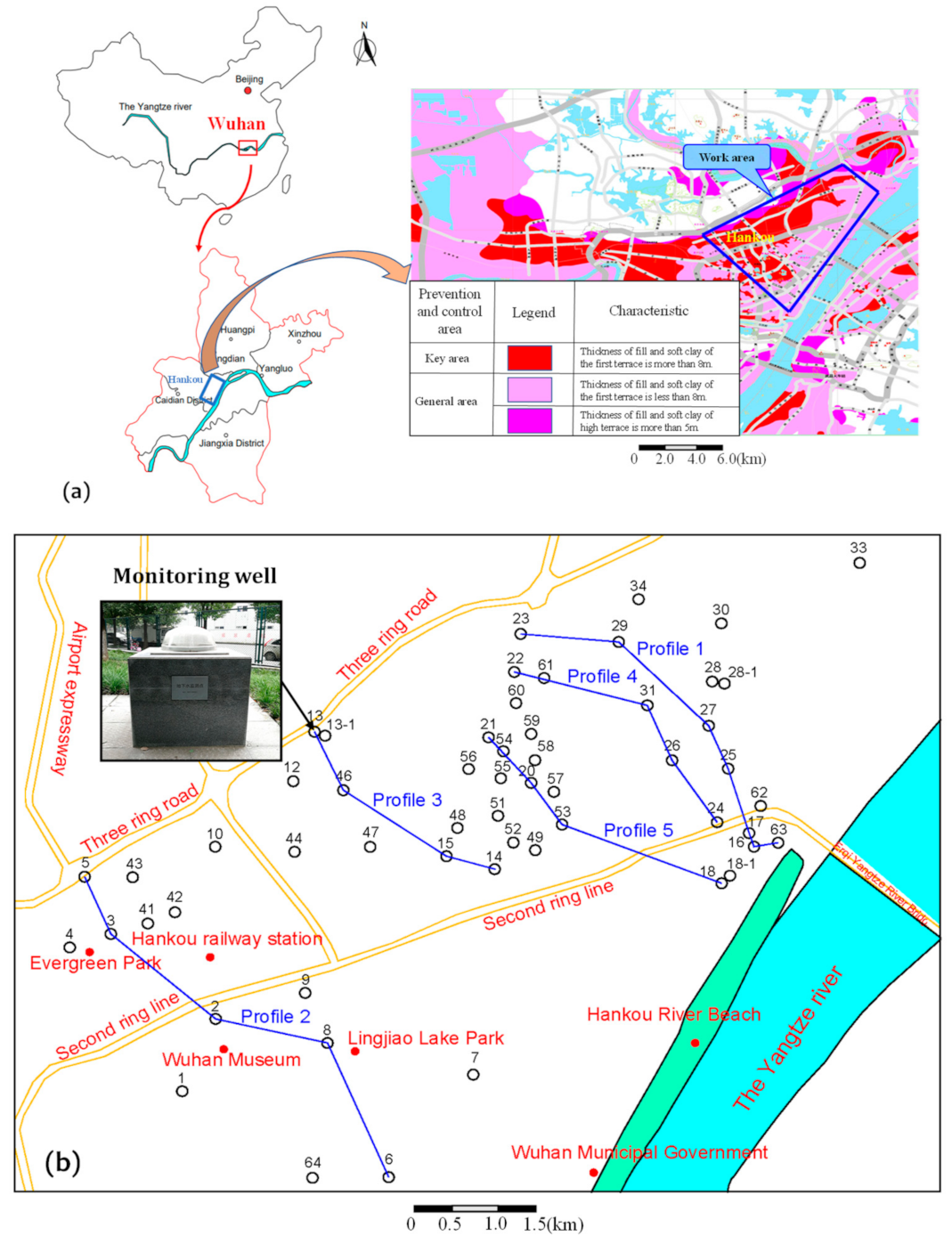 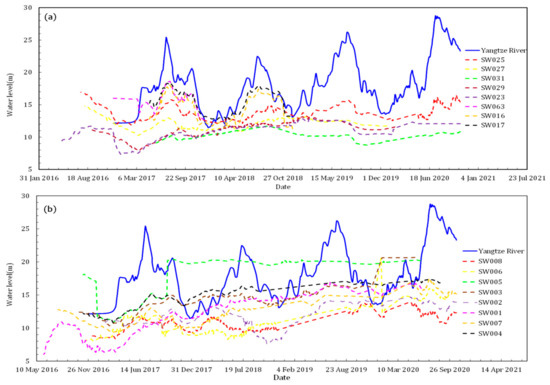 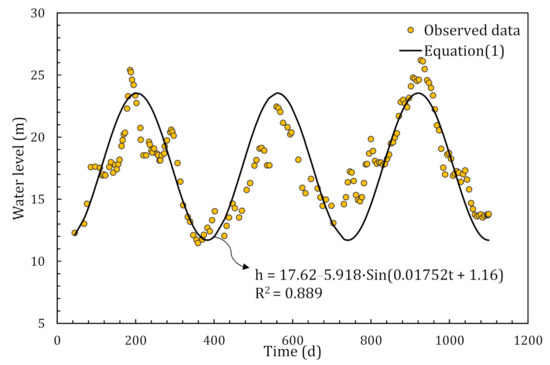 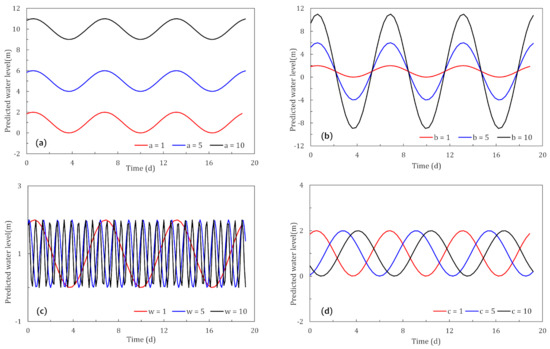 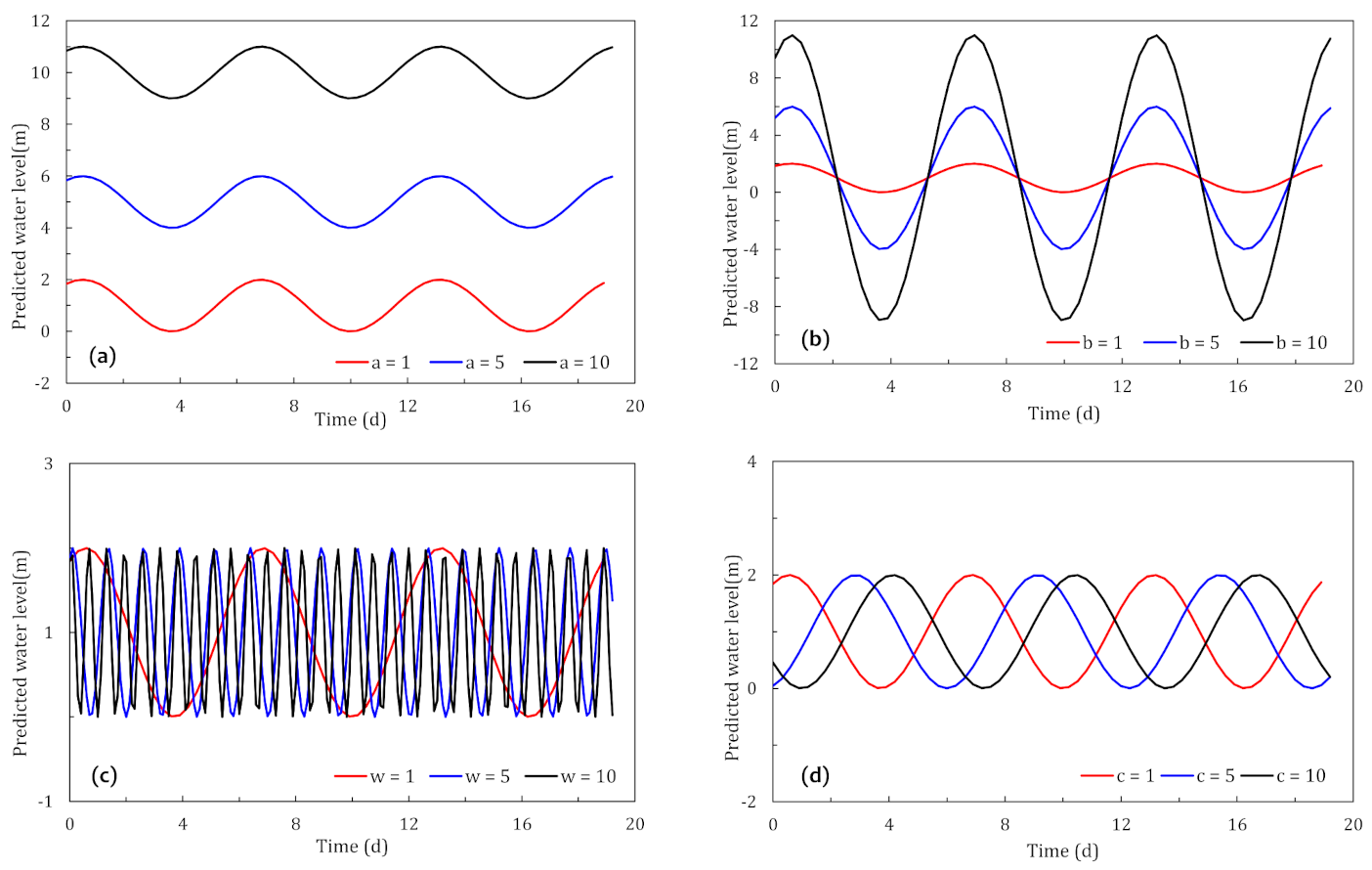 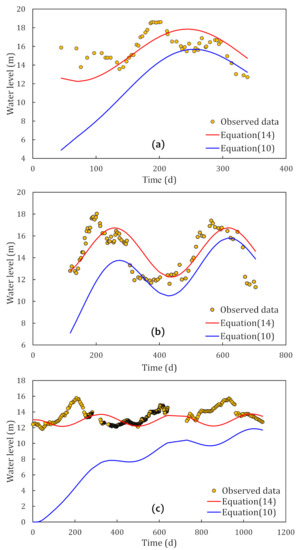