The stable isotope compositions in precipitation are widely investigated in Earth science [1,2,3]. Usually, there are strong linear relationships between stable hydrogen and oxygen compositions (δD and δ18O) in natural water, and the best-fit line (δD = 8 δ18O + 10) at a global scale is termed as the global meteoric water line (GMWL; [4]). Influenced by the evaporation condition at the source area as well as associated meteorological conditions [5], the local correlations between δD and δ18O in precipitation vary. For a specific location, it is necessary to establish a local meteoric water line (LMWL) [6,7], which is potentially useful to assess water sources and the degree of sub-cloud evaporation [8]. Below-cloud secondary evaporation of falling raindrops makes the slopes and intercepts of LMWL lower [9] and deuterium excess (D-excess, defined as d = δD − 8 δ18O) lower [10,11].
In most cases, the LMWL is usually established by an ordinary least squares regression (OLSR) [12], although other regressions are also recommended by IAEA (International Atomic Energy Agency) and other scientists [12,13]. The OLSR method logically gives all data points the same weighting, which may be sensitive for some heavy and small precipitation events [14,15]. When a sampling period is relatively short, great uncertainty of LMWLs may be involved, and the slope and intercepts may be sensitive to air temperature, precipitation amount and relative humidity. In studies where heavy rainfall events play a dominant role, the effect of small precipitation events on hydrological processes may be overestimated if equal weights are applied to each sample [16].
In the past decade, alternative methods considering precipitation amounts have aroused great attention about LMWL determination [14,15,17]. One of the widely-applied weighted methods, precipitation-weighted least squares regression (PWLSR), was introduced by Hughes and Crawford [15], and this method reduces the influence of small amounts. Based on the global data, Crawford et al. [17] indicated the weighted and unweighted regression results are generally similar, except in some coastal and oceanic sites with a poor linear relationship between δD and δ18O. However, some cases in an arid setting [14] indicated the necessity of precipitation weighting when precipitation events are limited.
Situated at the western Loess Plateau and near the Tibetan Plateau, Lanzhou is jointly influenced by westerlies and monsoon moistures [18,19,20,21,22]. The Yellow (Huanghe) River flows from south-west to north-east through the urban area of Lanzhou. Although LMWL in Lanzhou was previously determined using >200 [23] or >400 event-based samples [21,24], the precipitation amount weighted methods were not taken into account until now. In this study, 959 event-based samples at four stations from April 2011 to October 2014 were applied to determine LMWLs using multiple regressions. The objective of this study is (1) to present seasonal variation of LMWL, (2) to consider the differences between precipitation-weighted and unweighted regressions, and (3) to discuss the sensitivity of LMWL to meteorological conditions.

3.4. Comparison between GNIP and Recent Observations

In Figure 10, the δ18O presents a clear seasonal pattern in the GNIP Lanzhou data (1985–1987 and 1996–1999) and the current enhanced network, and so do the previous studies [21,22,23,24]. Due to the GNIP data being from monthly samples, the event-based data from April 2011 to October 2014 at the four sampling stations are precipitation-weighted to monthly series. The monthly data from the current enhanced network together with the GNIP data are used to create a LMWL for each year, which show that the OLSR algorithm has a lower slope and intercept, while the LMWL calculated by PWRMA is closer to GWML. At the same time, OLSR and PWLSR have the smallest rmSSEav value among six algorithms (Figure 10 and Table S19 in Supplementary Materials).
Due to the GNIP data for all the years (1985–1987 and 1996–1999) with >4 months missing data per year, current observations from the four sites are used to discuss the inter-annual variability of LMWLs (Table 2). In 2011, the missing data exist in January, February and March; in 2014 there is also information missing in October, November and December. The missing months correspond to the periods with no precipitation or limited precipitation, which may affect the determination of LMWLs. Hence, we draw a comparison based on 2012 and 2013 data; the higher precipitation amount and lower air temperature give rise to higher slopes and intercepts using the different regression methods.
Although stable isotopes in precipitation are usually related to the temperature or amount effect [3], we observe no significant correlations between LMWL slopes derived by the six regression methods and temperature or precipitation amount at the Anning site in summer from April 2011 to October 2014 (Table 3). The summer result is out of accord with the annual scale, which can be seen at the other three sits (Tables S20–S22 in Supplementary Material). This reflects that other mechanisms make a positive contribution to the variability of LMWLs, including sub-cloud evaporation and recycled moisture attributed to the increasing urban green coverage in the past decades, especially in summer. It’s worth noting that the secondary evaporation is apparent in the summer monsoon period in Lanzhou, and that the potential contribution of recycled moisture has fluctuated during past decades [29,30].

In this study, the slope and intercept of the meteoric water line in Lanzhou are smaller than those of global meteoric water lines. The slopes and the intercepts of the amount-weighted monthly data are higher than those of the event-based data. Considering the slopes and intercepts of the event-based regressions for each season, spring and summer show considerably lower slope values than the others. The slope and intercept of LMWL obtained by three non-weighted methods (OLSR, RMA and MA) are compared. The slope calculated by the OLSR method is the smallest at the four sampling points, while the slope calculated by the MA method is the largest. The results are similar to the corresponding precipitation-weighted algorithms PWLSR, PWRMA and PWMA. Meanwhile, among the six algorithms, the rmSSEav of PWLSR reaches the minimum value, indicating that the calculation results of PWLSR are relatively stable.
There is a strong linear relationship between each meteorological parameter variable and the slope of the LMWL for the six methods. Generally, under the conditions of higher precipitation amounts and relative humidity as well as lower air temperature, water vapor pressure, dew point temperature and depression of the dew point, higher slopes and intercepts are seen using the different regression techniques. Compared with heavy precipitation, the variations of LMWLs are much larger when removing small precipitation. Higher precipitation amount and lower air temperature give rise to higher slopes and intercepts using the different regression techniques on an annual scale. The results show there is no significant correlation between LMWL slopes derived by the six regression techniques and temperature or precipitation amount at the Anning site in summer.
The monthly data from the current enhanced network together with the GNIP data are used to create a LMWL for each year, which shows that OLSR and PWLSR have smaller rmSSEav values. Affected by sub-cloud evaporation, the slope of the atmospheric precipitation line is reduced. At the same time, the sources of water vapor in different regions are different, and the meteorological conditions in the transport process and the precipitation process are also different. For a specific area, the meteoric water line can provide a background reference value for the study of the water cycle process. Therefore, compared using GNIP and recent observations, sub-cloud evaporation and recycled moisture may make a positive contribution to variability of LMWLs due to the increasing urban green coverage in the past decades, especially in summer.

The authors declare no conflict of interest. The work described here has not been submitted. 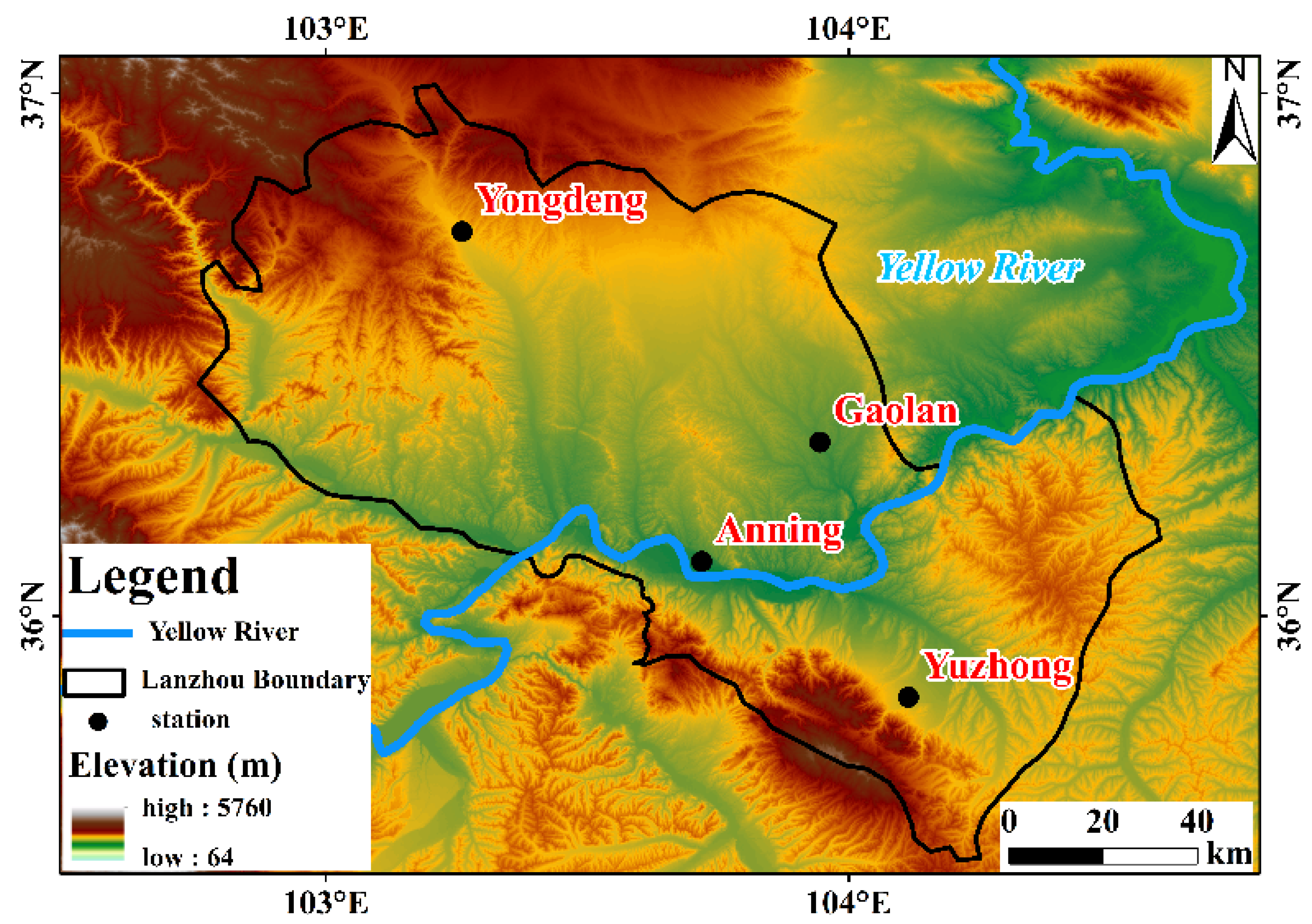 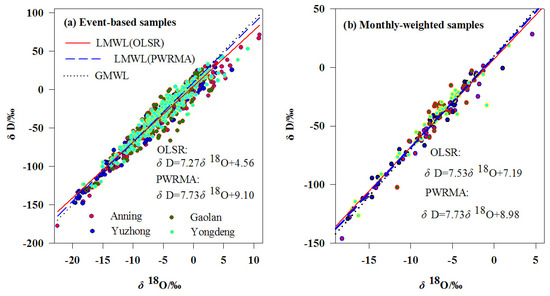 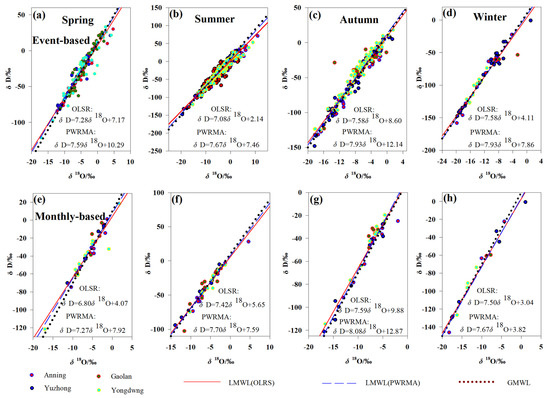 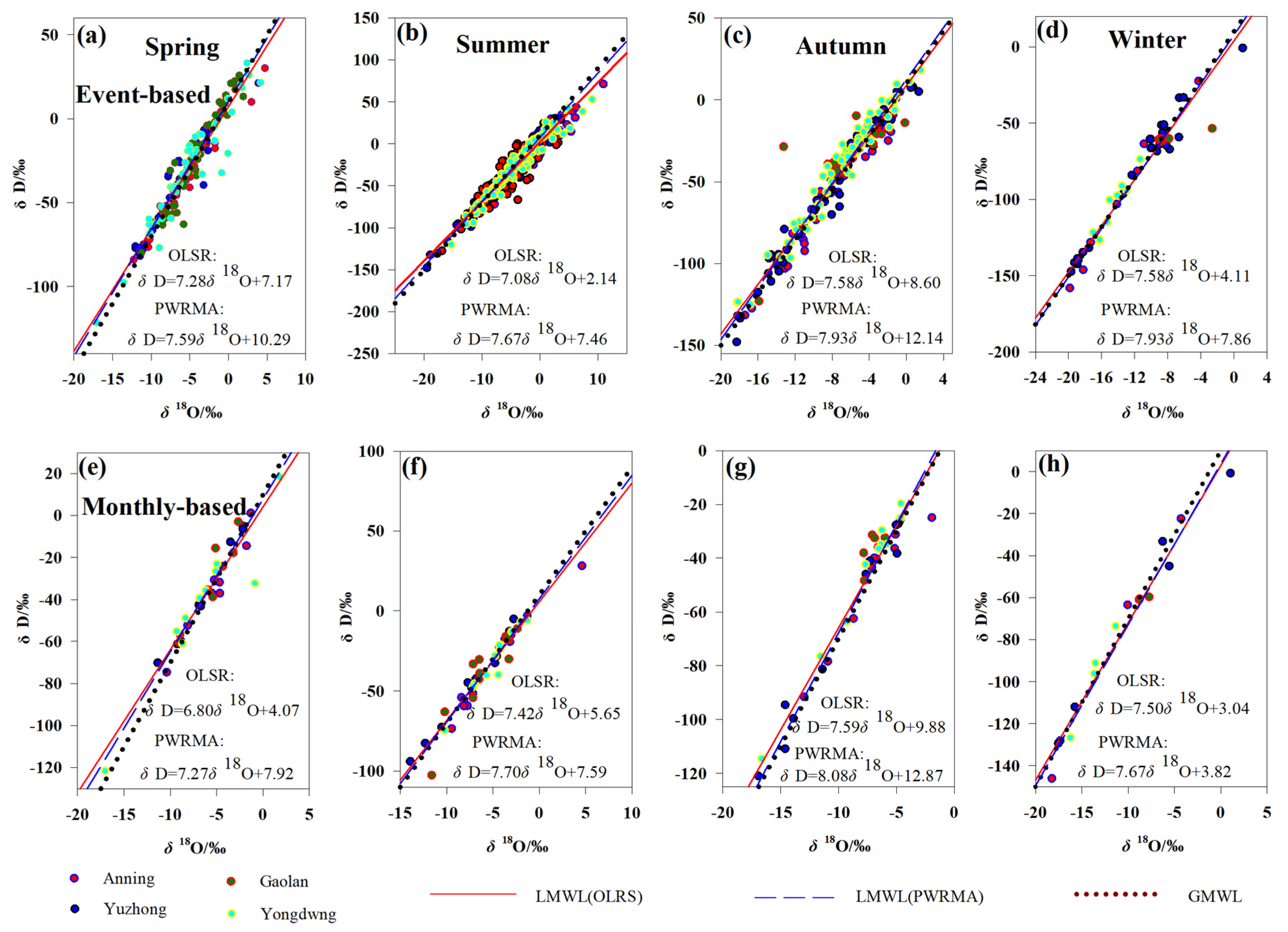 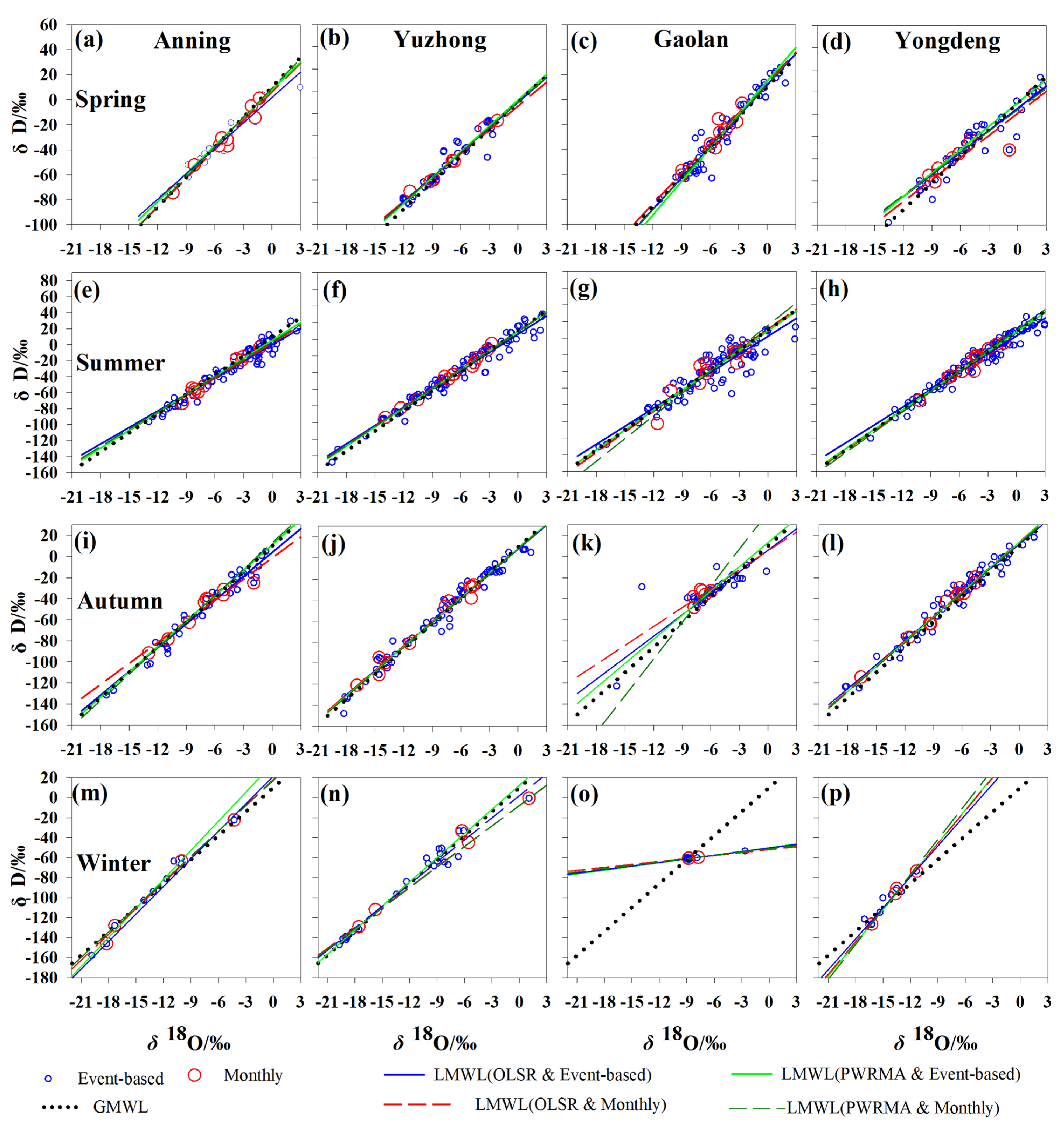 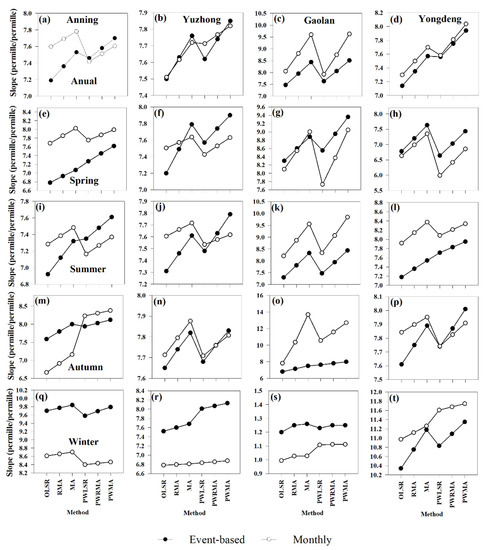 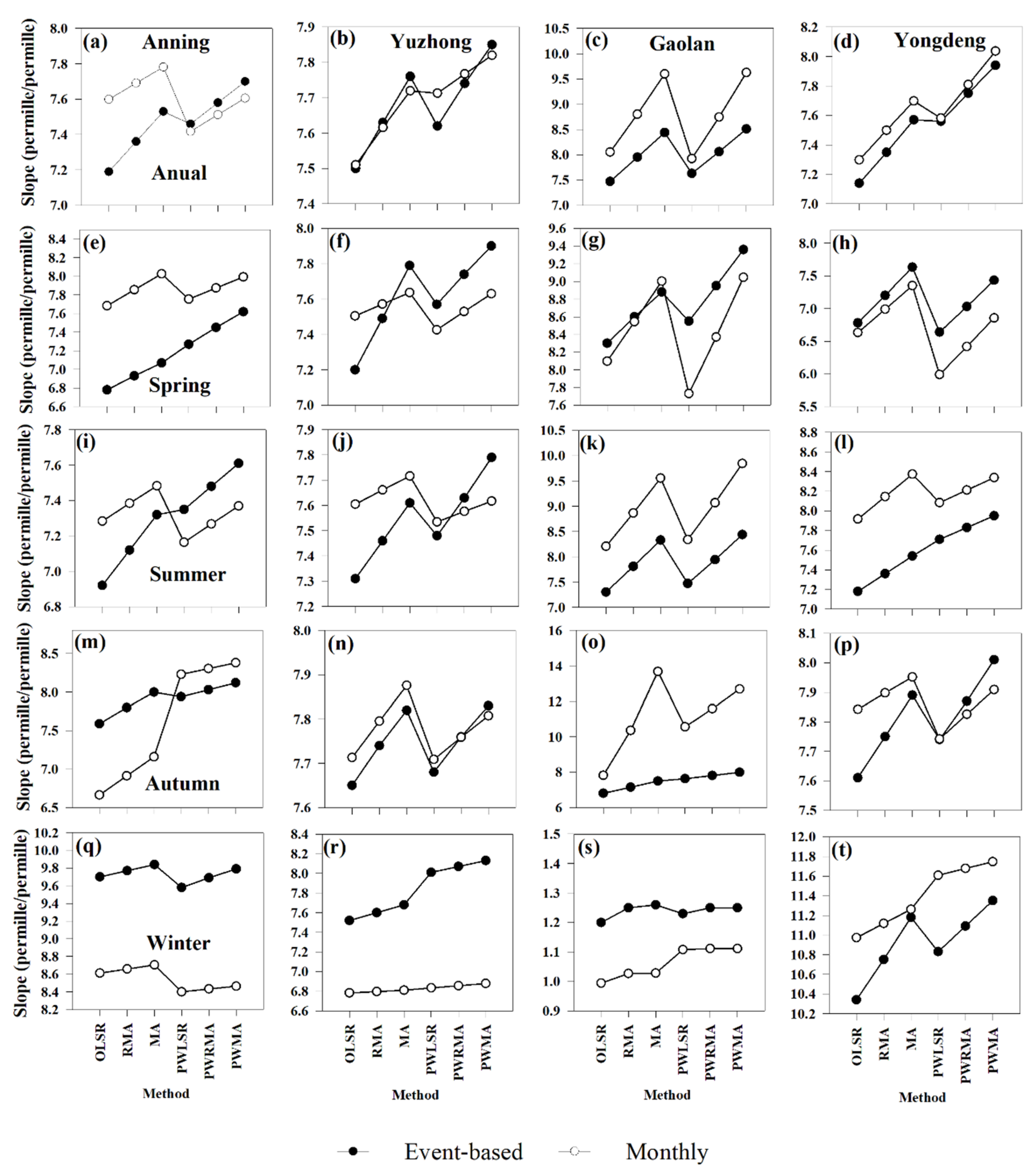 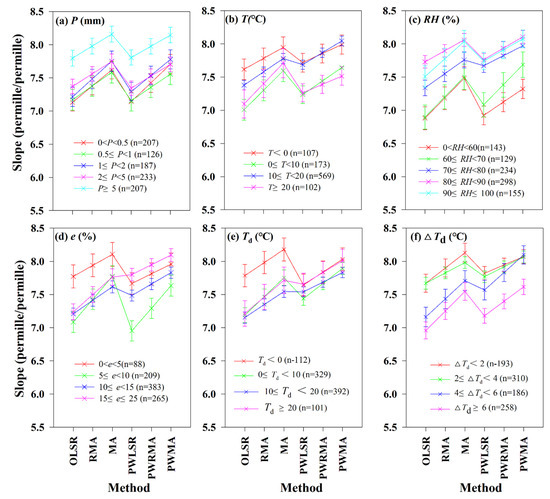 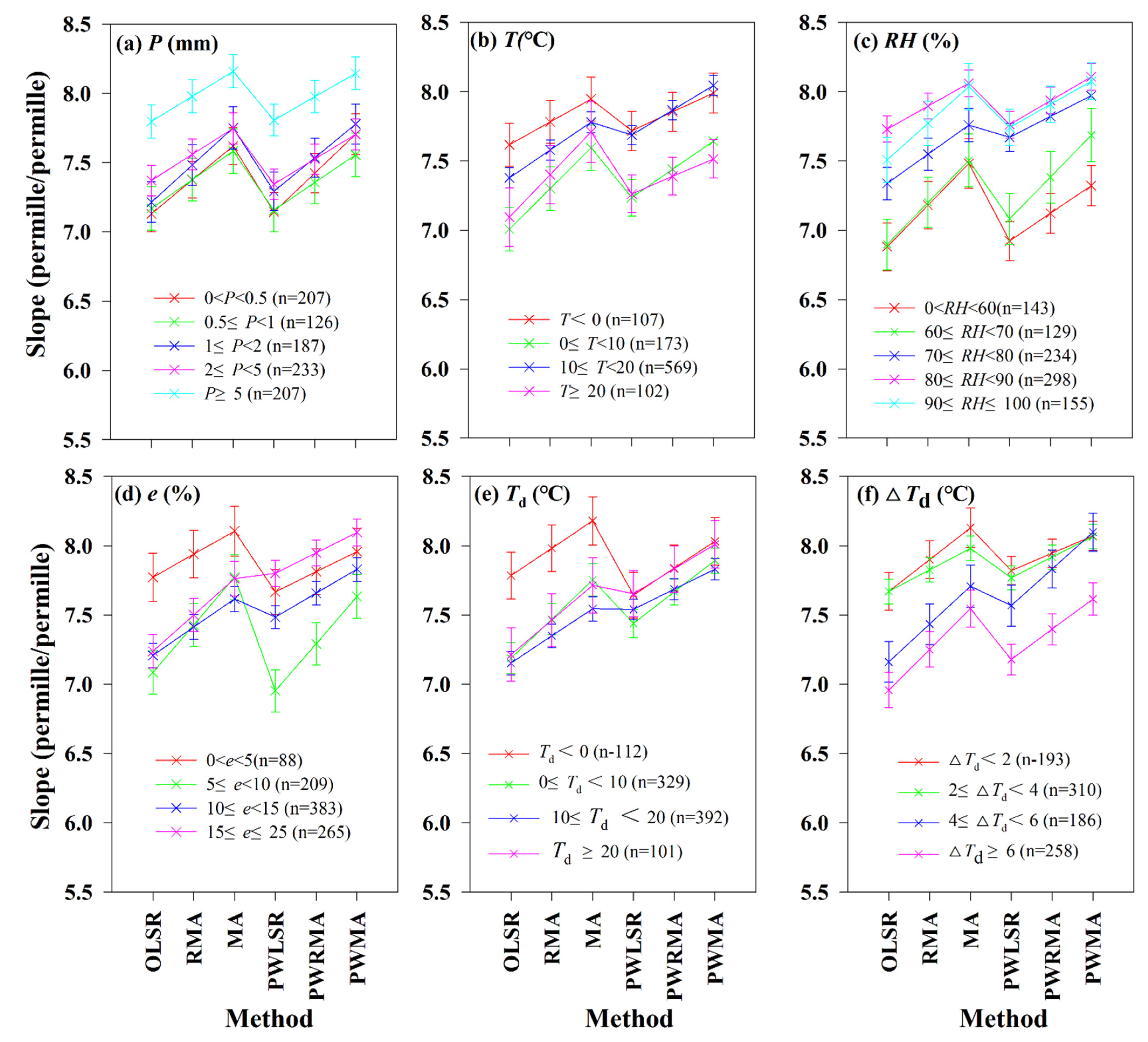