The hydrochemistry and quality of local shallow groundwater was assessed within the Xinzhou basin in Shanxi, North China. Piper diagrams, correlation analysis, principal component analysis, chloro-alkaline indices, ion proportion diagrams, and Gibbs diagrams were used to reveal the hydrochemical characteristics and evolution mechanisms of groundwater. Besides, two indicators of sodium adsorption ratio and soluble sodium percentage, USSL and Wilcox diagrams, and water quality index models were used to evaluate the groundwater quality for irrigation and drinking. In general, groundwater in most areas of the basin is fresh water with total dissolved solid lower than 1000 mg/L. But there are salt water in some parts of the southern basin, with total dissolved solid higher than 1000 mg/L, due to industrial and domestic pollution. The hydrochemical facies of groundwater in most areas are HCO3-Ca and mixed HCO3-Ca·Mg·Na types, while it is HCO3·SO4·Cl-Na type in a small part of the basin. Nitrate pollution widely occurred in the basin because of the use of nitrogenous fertilizers. The dominant mechanism controlling the evolution of groundwater chemistry compositions was the weathering of rock minerals. It mainly reflected in the dissolution of carbonate minerals. And the carbonate dissolution is the major origins of HCO3−, Ca2+, and Mg2+ in groundwater. However, Na-Ca exchange is the important source of Na+. Shallow groundwater was suitable for irrigation and drinking except for some southern parts of the basin. These results will be helpful for the protection and efficient management of groundwater in the Xinzhou basin. View Full-Text
Keywords: hydrochemical characteristics; sources of main ions; groundwater evolution; nitrate pollution; water quality assessment hydrochemical characteristics; sources of main ions; groundwater evolution; nitrate pollution; water quality assessment
►▼ Show Figures 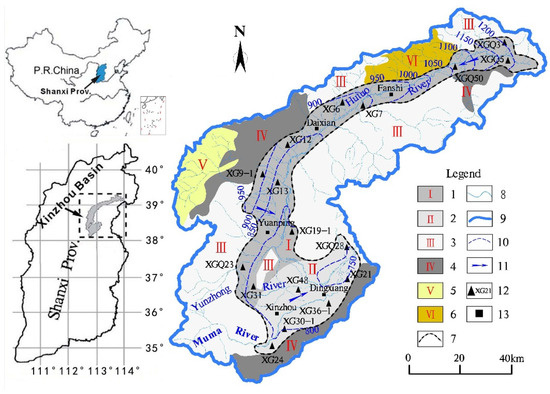