Communicating for Aquatic Conservation in Cambodia and Beyond: Lessons Learned from In-Person and Media-Based Environmental Education and Outreach Strategies

Fishing Methods Matter: Comparing the Community and Trait Composition of the Dai (Bagnet) and Gillnet Fisheries in the Tonle Sap River in Southeast Asia

:
The Tonle Sap Lake and River ecosystem in the Lower Mekong Basin of Southeast Asia is one of the most productive inland fisheries globally but is currently threatened by overfishing, dam construction, and climate change. We compare the catch composition and amount from 2007–2013 of two fishery gear types, the bagnets of the largest commercial fishery, the Dai fishery, and gillnets, which are deployed ubiquitously by independent fishers. We found that the two methods captured a similar number of genera (81 and 88 in the Dai and gillnet). Catches of both fisheries were dominated (>75%) by three genera that migrate longitudinally, Henicorhynchus, Labiobarbus, and Paralaubuca. The catch of the Dai fishery followed annual variation in the flood pulse extent, but the gillnet catch did not. We used resource selection ratios to quantify selection pressure by the gillnet fishery, relative to the Dai fishery, on fish from different genera and trait groups. The gillnet selected for fish that migrate laterally from the floodplain to the main river and for higher trophic level fish. Gillnets may target groups of fish that are less impacted by the long-standing Dai fishery. For both fisheries, we note a need for monitoring fish lengths in order to understand the effects of selection on population dynamics and species-specific trait changes.
Keywords:
selection; body size; trophic level; migration; flood pulse; tropical; Mekong; Tonle Sap; resource selection ratios; river flows

The Dai fishery is an industrial bagnet fishery that operates during the receding hydrograph and dry season, from October to March, along the lower stretch of the Tonle Sap River (Figure 1). The Dai fishery is operated during the flow recession to capture fish that are returning from the Tonle Sap Lake and floodplains to the Mekong River. The Dai is organized into 14 rows that are perpendicular to flow. The rows begin downstream of Kampong Chhang and continue towards the confluence of the Tonle Sap and Mekong Rivers. Each row is 25 m wide and is made up of two to seven nets, which are independently operated by lease holders and lifted by separate crews. The Dai nets are relatively indiscriminate with mesh sizes that taper from 15 cm down to 1 cm at their terminus (cod end). The nets encompass nearly the entire water column, with the top of the net on the water surface and the bottom weighted to the substrate, and the net is held open by the water current. See [17] (pages 228-232) for diagrams of the bagnets. We used a previously published time series on catch, which is recorded by weight, at the Dai fishery [14]. This data set was developed using a randomly stratified sampling method across several rows that is designed to estimate fishery production. Seasonal estimated catch (in biomass, kg) was used in this study. This data set excludes 25 sporadic species (e.g., estuarine and marine visitors) that made up 0.38% of the total catch.
Gillnet data were collected from June 2007 through May 2014 (366 weeks) following sampling procedures outlined by the Mekong River Commission (MRC, 2007) and as described in [43]. Briefly, three stationary gillnets were deployed daily in the Tonle Sap River for 12 ± 2 h. Gillnets were 2–3.5 m high and 120 ± 50 m long with a mesh size of 3–12 cm and are typically set perpendicular to flow. A diagram of typical gillnets can be found in [17] (pages 162–164). Captured fish were identified to species and enumerated. The mean of the daily catches (numbers of fish) of the three nets were summed to estimated weekly catch. While gillnet data are available throughout the year, here we only use weeks that overlap with the Dai fishery season to facilitate direct comparisons. For all analyses, we aggregated fish from both datasets by genus. We completed this step to avoid potential inconsistencies in species-level identification between the Dai and gillnet fisheries.
To analyze change in the trait composition of the fisheries, each species was assigned a set of traits describing migration pattern, body size, and trophic level using categorizations that are based on several sources and published in [43]. In summary, migratory guilds were assigned as white fishes (longitudinal migratory species, up and down the Mekong River), grey fishes (lateral migratory species, between the floodplain and streams or rivers), and black fishes (non-migratory, resident species). Body size groups were based on estimated maximum total lengths and were grouped as small (<25 cm), medium (26–60 cm), or large (>60 cm). Trophic position estimates were categorized into trophic group 1 (trophic level <2.75), group 2 (2.75–3.75), and group 3 (>3.75).

We quantified annual variations in the magnitude of the flood pulse using daily water level data from 26 years (1990–2015) at the Tonle Sap River that were obtained from the Mekong River Commission. We used this data to estimate the flood pulse extent following [21], where the flood pulse extent is the multiplication of the number of days when flows exceed base flows by the average deviation from baseflows. Baseflows are defined as the mean daily flow for the time series. We compared the flood pulse extent to the net residual from the seasonal trend using Fast Fourier Transforms as described in [21]. We compared these two methods using a Pearson’s correlation for the entire time series and for the seven years of fish data (Figure S1). The estimates were very similar, so we used flood pulse extent since this metric has been previously demonstrated to be important for the Mekong fishery [20].
While the productivity of the Dai fishery is known to be closely linked to the previous wet season hydrology, with flood years resulting in a more productive fishery, this pattern has not been explored for the gillnet fishery. We summed the total catch for each fishery for the dry season and compared this to the pattern of flood pulse extent in the Tonle Sap River. For each fishery, we calculated a Pearson’s correlation between total seasonal catch and flood pulse extent.

2.3. Community Analyses to Compare the Dai and Gillnet Fisheries

We conducted a set of analyses to understand differences in the community of fish captured in the gillnet versus the Dai fishery. To understand how the diversity of catch was distributed across seven years in each fishery, we estimated species richness and Shannon Diversity indices for each fishery and year combination (n = 14) using the “specpool” function in the “vegan” package in R [44]. Errors in species richness estimation are driven by the presence of rare species [45]. We treat these measures of richness and evenness as observations of species with high certainty given that the few rare species were excluded for being insufficient for the linear model in the Dai dataset [14]. We also calculated the average and annual percent of catch in both fisheries that is represented by the three most common genera in both fisheries, Henicorhynchus, Paralaubuca, and Labiobarbus.
Next, we used nonmetric multidimensional scaling (NMDS) to visualize differences in the catch assemblage of the two fisheries. We standardized the two catch datasets using the “frequency” method in the “decostand” function in the “vegan” package R so that the two datasets were comparable. We then conducted the NMDS using the “metaMDS” function in “vegan” with Bray-Curtis dissimilarity. Finally, we conducted a permutational analysis of variance (PERMANOVA) on the Bray-Curtis dissimilarity matrices to determine if the fishery (Dai versus gillnet) and year explained a significant amount of the variance of the community structure. We performed the PERMANOVA using the “adonis2” function in “vegan” with 999 permutations.

2.5. Trait Changes in the Dai and Gillnet Fishery

Overfishing and targeted selection can cause shifts in body size and trophic level of fish communities in tropical regions [46,47,48]. We predicted that the more size-selective gillnet fishery would demonstrate a greater decline in traits such as body size and trophic level. For both fisheries, we estimated the annual weighted mean of maximum total length (cm) and trophic position using the trait database, weighted by catch. We estimated weighted means using the “wtd.mean” function in the “Hmisc” package in R [49]. Next, we conducted linear regressions between these two traits and year for each fishery for a total of four linear regressions.

3.2. Community Analyses to Compare the Dai and Gillnet Fisheries

3.4. Trait Changes in the Dai and Gillnet Fishery

Fishing methods matter for quantifying changes in community and abundance of catches in freshwater ecosystems supporting multi-species and multi-gear fisheries. We suggest that the Dai fishery is more likely to be a better estimate of relative annual production of the fishery, since the methods are stationary and better standardized. However, because gillnets are widespread, understanding their apparent selection for fish of higher trophic level and those classified as grey fishes has implications for the entire fishery. We highlight that further data on species-specific body sizes within each fishery will be critical for guiding evolutionary-informed management in light of widespread fisheries selectivity that has been documented globally.

This study was funded by the United States Agency for International Development (USAID) Wonders of the Mekong Cooperative Agreement (AID-OAA-A-00057 to Z.H. and S.C.).

All data used in this analysis are previously published and available [14,43].

Data collection was supported by the Mekong River Commission in partnership with the Inland Fisheries Research and Development Institute (IFReDI), Fisheries Administration, Cambodia. Thank you to peer reviewers who improved this manuscript. 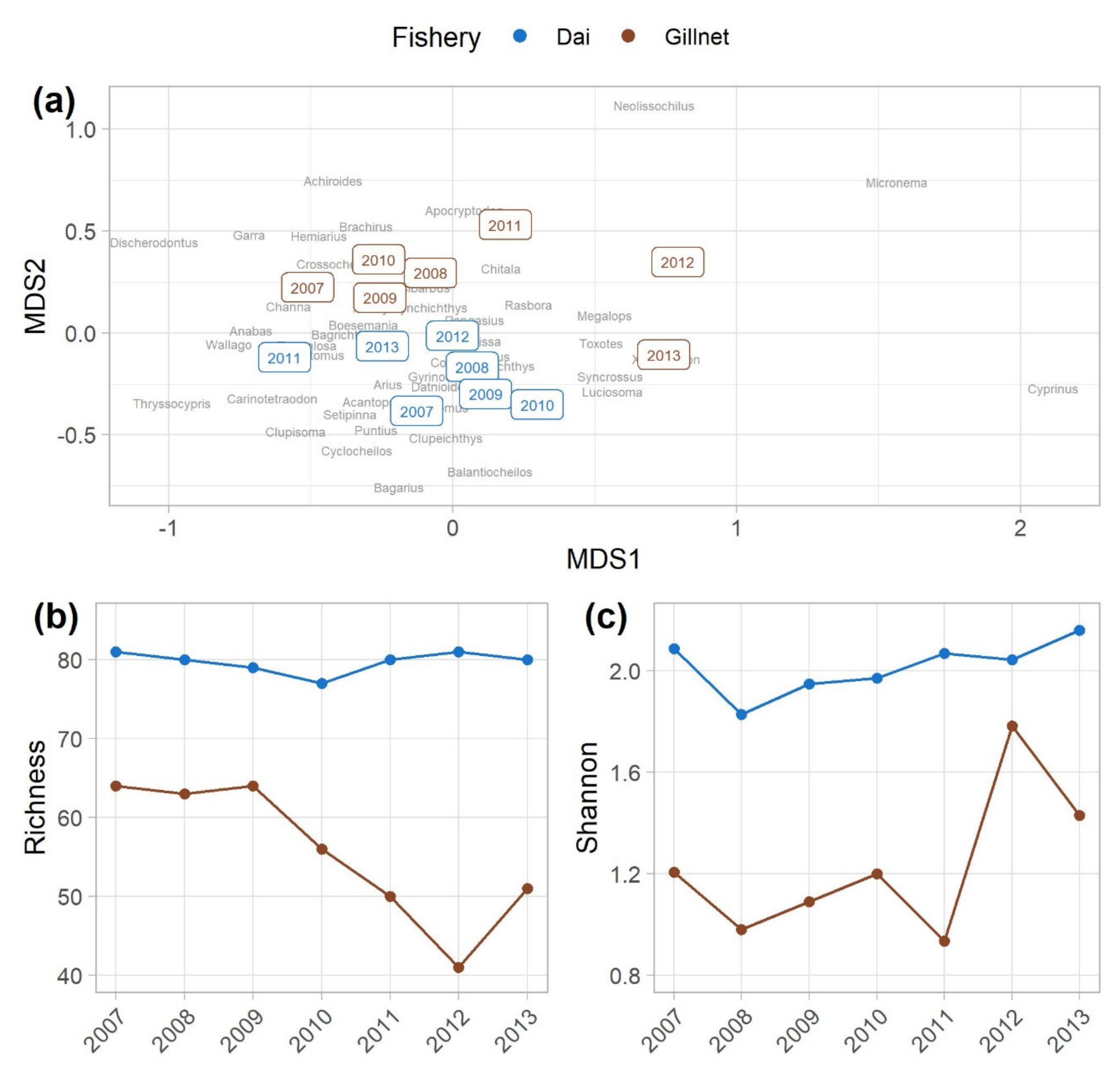