The Awash River basin is classified into the upper basin, middle basin, and lower basin. The upper basin is the most irrigated and socio-economically important, wherein early and modern agriculture started. This study aimed to assess the upper basin’s hydroclimate variability under climate change from 1991 to 2015 following the county’s land-use policy change. Distinguished topographical settings, namely, lowland, midland, and highland, are used for upper Awash basin hydroclimate trend analysis. Lowland stations revealed a nonsignificant seasonal and annual increasing trend except for the Autumn season. Midland stations showed a decreased seasonal rainfall. Except for Sendafa, the increased station, the highland area exhibited an annual decreasing trend. The Awash-Hombole and Mojo main tributaries are used for the evaluation of basin streamflow. The Awash-Hombole main tributary resulted in annually growing trends during the summer season. Mojo main tributary resulted in a significantly decreasing trend during the spring, summer, and autumn seasons with a 99% level of significance. Therefore, following the basin’s topographic nature, the change of hydroclimatic elements, mainly of the rainfall and streamflow, is observed. Accordingly, its hydroclimate variated by 11 and 38% with precipitation and streamflow, respectively, from the mean value within the study time series. View Full-Text
Keywords: hydroclimate; upper awash basin; trend analysis; streamflow hydroclimate; upper awash basin; trend analysis; streamflow
►▼ Show Figures 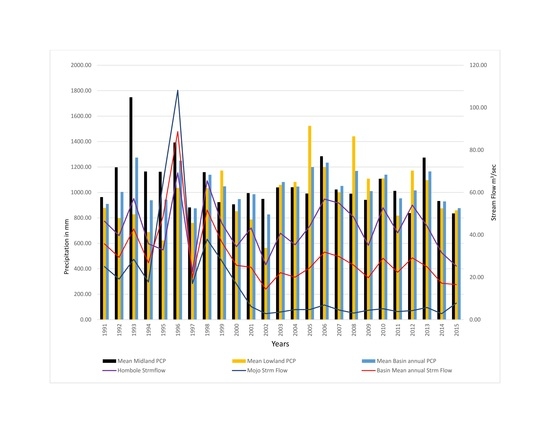