Since Tony Allan put forward the concept of “virtual water” (VW) at a SOAS (School of Oriental and African Studies) seminar in the 1990s, research on virtual water issues, including virtual water calculations, has received increasing attention from scholars and governments, leading to the development of a reasonable virtual water strategy. This strategy can effectively improve the allocation and utilization of water resources, promote the balance of cross-border water use, and alleviate the difficulties in areas facing water shortage [1]. In recent decades, the depth and breadth of China’s participation in the international division of labor and international trade has continuously expanded [2]. While trade has continued to grow rapidly, it has also brought about a large amount of resource consumption. Therefore, an accurate calculation and analysis of the water consumption implied by import and export trade, as well as its influencing factors, can provide a strong basis and guidance for the formulation of virtual water strategies [3]. The issue of implied virtual water in foreign trade has received increasing attention by scholars at home and abroad. Below, we elucidate the calculation of trade volume, the calculation of trade hidden content, and the decomposition of influencing factors.
First, in terms of trade volume measurement, with the continuous extension of production chains and the rapid development of trade in intermediate products, trade economists and policymakers have reached the consensus that traditional trade statistics based on gross trade value have serious shortcomings and can no longer reflect the current actual situation of international trade based on global value chains (GVC), under which trade statistics based on “value added” are becoming increasingly important [4]. Wang et al. (2015) combed the previous relevant research, decomposed and analyzed the total trade flow, sectoral trade flow, bilateral trade flow, and bilateral sectoral trade flow, and outlined the relationship between the “traditional trade” statistical system and the “value-added trade” statistical system. Following the research of Koopman et al. [5] and Wang et al. [4], some scholars studied the added value of the trade process under the background of GVC [2,3,5,6,7]. The research of Koopman et al. and Wang et al. has received extensive attention from scholars. However, outside of the fields of macroeconomics and sectoral economics, research on virtual water is somewhat lacking; this study aims to fill some of these gaps.
Second, in terms of virtual water trade measurement, in 1974, the concept of “implied flow” was put forward by scholars for the first time. “Virtual water” (VW) is the derivative of “embodied flow”, i.e., the total amount of water resources consumed to complete the production of products and services in the whole value chain process. At present, scholars mainly use two methods to measure the virtual water volume: (1) “bottom-up” product life-cycle measurement [8,9,10], and (2) “top-down” input/output analysis (IOA). The bottom-up method is more suitable for the measurement of fine commodities, while the input/output method is more suitable for the overall measurement of a whole country or region [11]. Input/output analysis (IOA) was put forward by American scholar Leontief in 1936. Leontief used this method to study the relationships between various industries in the United States, and he predicted and analyzed the steel demand in 1950. Since then, many scholars have adopted this method to study the macroeconomic field, and its application has been extended to the field of resources and environment [12]. It has undergone several modifications, such as the single-region competitive input/output model, single-region noncompetitive (import) input/output model, bilateral trade input/output model, and multi-region input/output model. Some scholars have applied this method to the study of virtual water trade [13,14,15,16,17,18]. In recent years, some scholars have tried to measure and analyze the implied emissions and resource consumption in the trade process from the perspective of global value chains [19,20,21,22,23]. At present, no study has measured virtual water trade in combination with the whole process of value chains.
Third, in terms of the decomposition of influencing factors, at present, structural decomposition analysis (SDA) and exponential decomposition analysis (IDA) are the main methods used by scholars to decompose and analyze the influencing factors of implicit flow change. Zhang [24] used this model to measure SO2 emission and decompose the influencing factors of its change. This method has been continuously adopted by scholars in research [11,25,26,27,28,29]. Compared with IDA, SDA is rich in explanation factors, but it still cannot overcome the problem of the deviation of results and residual terms caused by decomposition; thus, scholars have tried various methods to deal with this problem, e.g., the logarithmic mean Divisia index (LMDI) decomposition method proposed by Ang [30] and the two-level average division method proposed by Dietzenbacher and Los [31], which has been widely adopted in recent years [20,32,33]. However, these adjustments still cannot eliminate the problem of the decomposition results deviating from the true values [34,35].
Dietzenbacher and Los [31] showed that, when R factors jointly determine the change in a variable, different decomposition forms can be obtained by analyzing the influence degree of these factors, all of which should be considered comprehensively (that is, the average value of all these forms should be used as the decomposition result). Zhang [24] adopted this method in his research, while also pointing out that the calculation complexity of this method is too large when there are many influencing factors. Albrecht et al. [35], on the basis of the concept of the Shapley value, proposed and used Shapley decomposition in their research, and they adopted the method of hierarchical decomposition to obtain accurate values and effectively reduce the amount of calculation.
To sum up, this paper expands the field of virtual water on the basis of existing research as follows: (1) using the value-added decomposition analysis method based on global value chains as a reference, this paper constructs the “whole process measurement model” of virtual water trade, and the calculation and decomposition are carried out considering the overall and sub-sectoral aspects, making the results more detailed and reasonable; (2) Shapley decomposition is used to eliminate the large deviation and residual term of decomposition results.

The data in this paper came from the WIOD database funded by the European Union. The data released by the database in 2013 included the data of 41 countries (regions) from 1995 to 2011, and the industries were classified into 35 categories. The data released in 2016 included the data of 44 countries from 2000 to 2014, and the industries were subdivided into 56 categories. Firstly, this paper adjusted the industry integration into 35 categories, of which 33 were actually studied due to a lack of data in department 19 (sales and maintenance of motor vehicles and motorcycles, fuel retail) and department 35 (domestic service industry). Due to space limitations, we selected the years before and after the 2008 global financial crisis and the latest 2014 data results for analysis. This selection allowed for clear reflection on the changing characteristics of world trade, as well as the true trade situation of hidden water resources from the perspective of global value chains.

3.1. Consumption of Virtual Water Resources in Value-Added Trade and Its Regional Structure

In this study, the value-added decomposition analysis method was applied to the study of virtual water trade. The export scale was the primary factor affecting the virtual water trade volume, whereby the consumption of resources can be reduced by optimizing the export structure, although its scale is difficult to control. The SDA decomposition results of this paper also show that the import and export industry structure had an important impact on the virtual water trade volume. As an important factor for the restrained growth of virtual water, the reduction in the water consumption coefficient achieved remarkable results in recent years, and it will remain a feasible and important scheme in the future. The trade proportion of intermediate products and the forward and backward correlation with other countries all had an important impact on the virtual water trade volume. Therefore, actively participating in the division of labor in the global value chains, enhancing the level of R&D technology and promoting its position in the global value chains, are not only of great significance in terms of economic effects, but also very urgent in terms of resource conservation and utilization. In addition, the domestic intermediate input/output structure is also a factor that needs attention; thus, it is very important to improve the efficiency of intermediate input and optimize the structure of intermediate input products. It is foreseeable that, with the growth of the economic and trade scale, virtual water consumption will continue to increase; however, advances in technology and structure will ease this growth to a greater extent. In the new era, the breadth and depth of participation in the international division of labor and international trade is bound to expand constantly; thus, it is becoming increasingly important to develop an open economy with high quality. The data and related policy suggestions obtained in this paper deserve attention.

No new data were created or analyzed in this study. Data sharing does not apply to this article.

The authors thank the editors and reviewers for their constructive comments and suggestions, which helped improve the quality of this article. 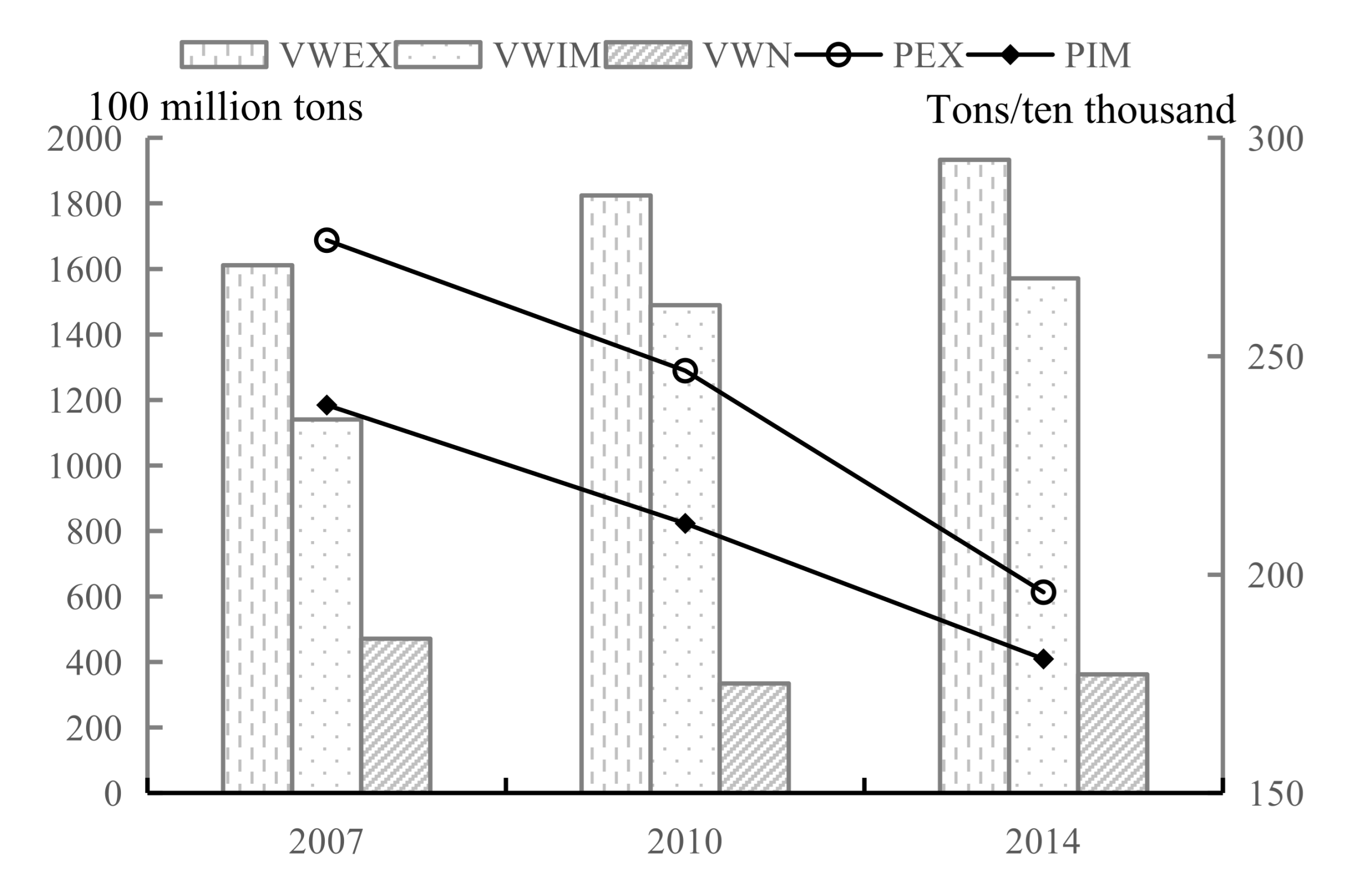 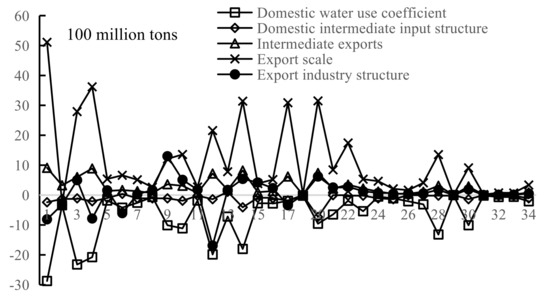 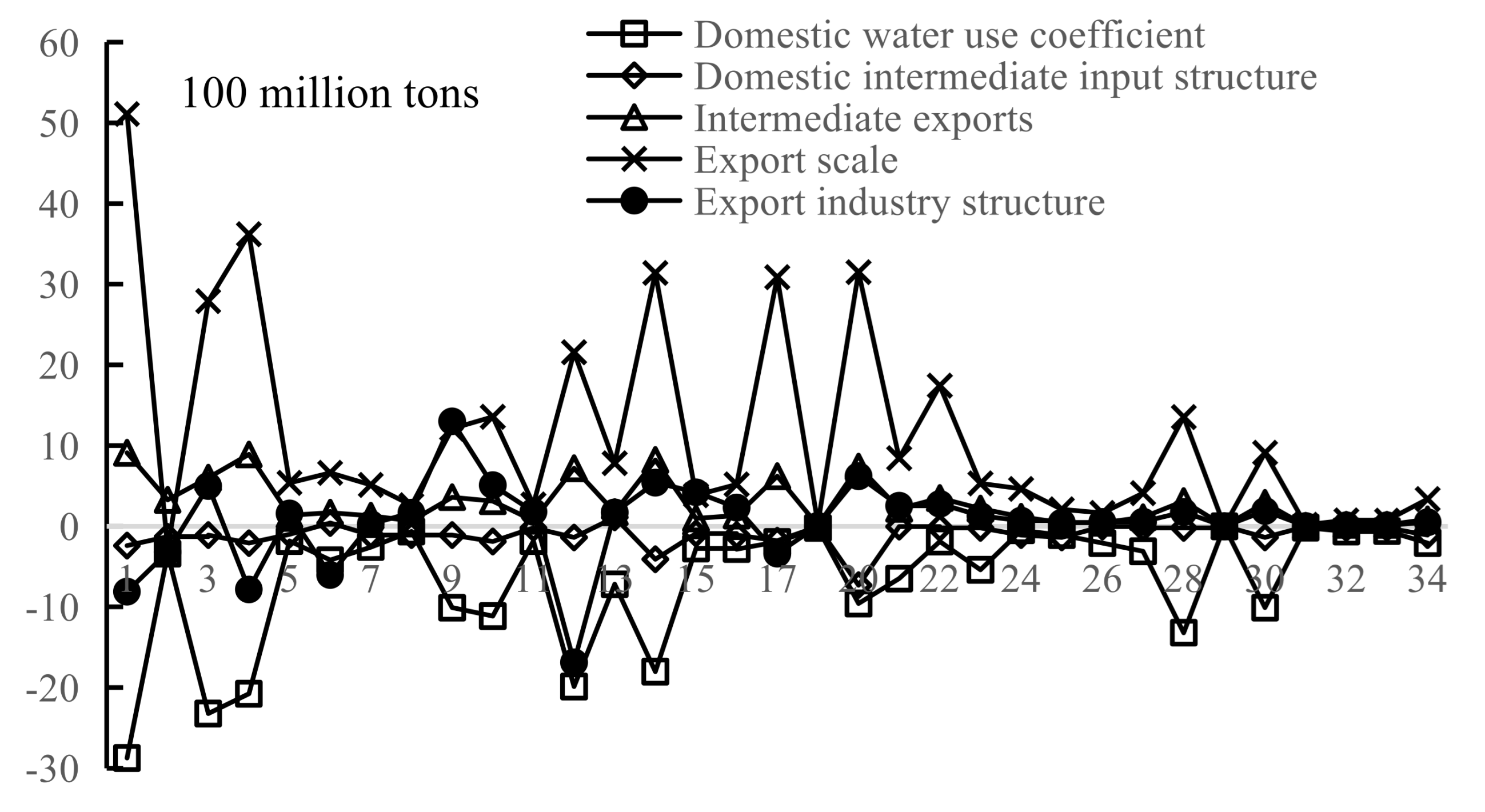 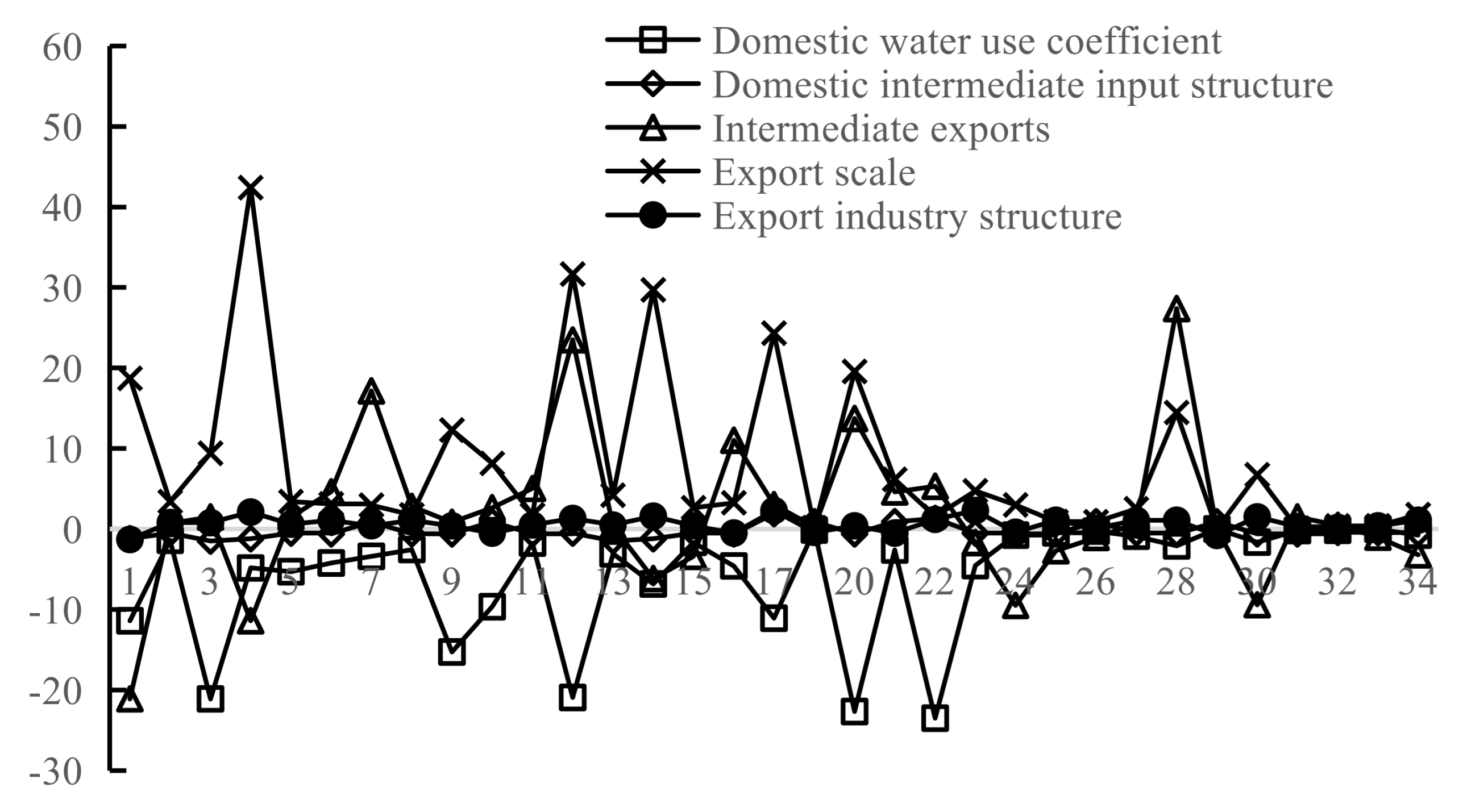 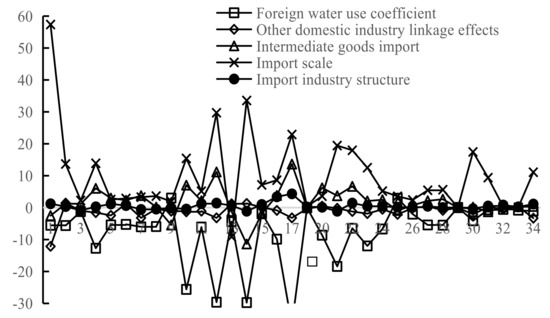