A Molecular-Level Picture of Electrospinning
Previous Article in Journal

Evaluating Treatment Requirements for Recycled Water to Manage Well Clogging during Aquifer Storage and Recovery: A Case Study in the Werribee Formation, Australia

Relationship Between Aquifer Pumping Response and Quality of Water Extracted from Wells in an Active Hydrothermal System: The Case of the Island of Ischia (Southern Italy)

The thermal waters of the Island of Ischia, an active volcano located in Southern Italy, are widely used for supplying numerous spas. Groundwater withdrawals occur mainly through wells in the coastal strip. This study explores the impact of withdrawals on the quality of the waters used in thermal facilities, which is required to be constant in terms of composition and temperature by law. For this purpose, specific investigations were conducted including 155 pumping tests, 124 water temperature measurements during pumping tests, 31 temperature and electrical conductivity logs and periodic chemical analysis of the waters of 21 selected wells. By comparing the response to pumping of the aquifer and the quality of the water extracted from the wells, it turned out that the quality of groundwater supplying spas depends not only on natural phenomena (meteoric recharge, seawater intrusion, and rising of deep hydrothermal fluids) but also relies on the island sector where groundwater is pumped and on the pumping method. The distance of the wells from the coast, the type of aquifer formation intersected by the wells, and the field of groundwater temperature of the hydrothermal system strongly affect the aquifer pumping response, determining the quality of water extracted from wells and its variation over time. In Ischia, techniques and regimes of groundwater withdrawals should adapt to the local aquifer pumping response, more than in another hydrogeological context. The concomitant analysis of drawdown, water temperature, and salinity during pumping turned out to be a valuable tool to define the sustainable yield of the single well. View Full-Text
Keywords: volcanic aquifer; pumping test; thermal water; Island of Ischia; intensive use of groundwater volcanic aquifer; pumping test; thermal water; Island of Ischia; intensive use of groundwater
►▼ Show Figures 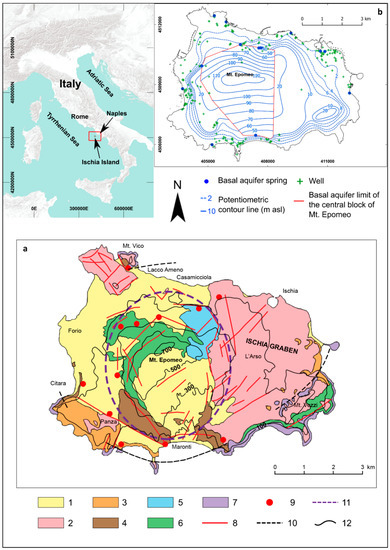