River confluences are important nodes for downstream sediment transport and geomorphological development. Previous studies have established the knowledge that under natural conditions, river confluence zones experience channel scour followed with middle channel bar development. Less care is however given to the intensity of a confluence scour zone under man-controlled conditions, such as discharge regulation and levee confinement. In general, our knowledge about long-term bed evolution downstream of large alluvial river confluences is limited. Here we conducted a study focused on the 69-km uppermost channel of the Atchafalaya River, the largest distributary of the Mississippi River, to test the hypothesis that the channel downstream of two large tributaries sustains longer-term, extensive bed scouring owing to increased discharge in the main channel and, therefore, mid-channel bars in such a confluence zone cannot be built under confined channel conditions. The Atchafalaya River carries the total flow from the Red River and approximately 25% of the Mississippi River flow, traveling southwards 230 km before emptying into the Gulf of Mexico. We utilized long-term records on water surface elevation and discharge during 1935–2016, as well as channel bathymetry survey data during 1998–2006 to determine changes in hydraulic head and morphologic deformation in the confluence zone. The results from this study show that the combined flow from the Red River and Mississippi River into the Atchafalaya River steadily increased to approximately 5848 cubic meters per second (m3 s−1) in the recent decades, and the channel bed of the uppermost Atchafalaya River experienced considerable erosion since the 1930s. At a specific discharge of 8000 ± 100 m3 s−1, the river stage decreased by 5.8, 5.6, and 4.9 m from 1935 to 2016 at (from upstream to downstream) Simmesport, Melville, and Krotz Springs gauging stations, respectively. The average bed elevation reduced by 1.9 m from 1998 to 2006, although its thalweg increased by 0.3 m. Based on the channel bed assessment, a total volume of 6.6 × 107 m3 sediment was eroded from the uppermost 69 km of the Atchafalaya over the 8 years. The findings suggest that confluence zones of large alluvial rivers under controlled flow and confined levee conditions can experience extensive, long-lasting channel erosion. This can be especially progressive if the channel below a confluence is confined by levees, which can increase drag forces and prevent middle channel deposition. Further studies are needed to determine if the eroded sediment from the uppermost Atchafalaya is carried out to the river mouth or is deposited in the lower Atchafalaya. Such knowledge will have both scientific and practical relevance in river engineering and management. View Full-Text
Keywords: river confluence zone; channel dynamics; bed material load; sediment transport; fluvial geomorphology; Mississippi River Delta river confluence zone; channel dynamics; bed material load; sediment transport; fluvial geomorphology; Mississippi River Delta
►▼ Show Figures 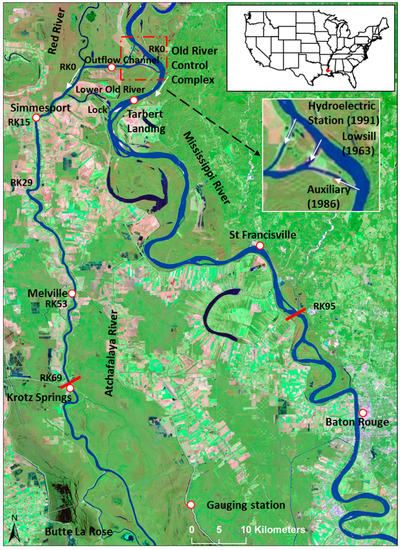