Algae-Laden Fouling Control by Gravity-Driven Membrane Ultrafiltration with Aluminum Sulfate-Chitosan: The Property of Floc and Cake Layer
Next Article in Special Issue

What Triggers the Annual Cycle of Cyanobacterium Oscillatoria sp. in an Extreme Environmental Sulfide-Rich Spa?

Temporary ponds are one of the most peculiar ecosystems in the world, being characterized by an extraordinarily rich crustacean fauna, with a high degree of endemism. Among them, diaptomid copepods are among the most biogeographically interesting taxa. However, the present knowledge on diaptomid distribution is still far from being exhaustive, even in the relatively well-studied western European countries. In this study, we report the first record of the diaptomid calanoid copepod Metadiaptomus chevreuxi for the Iberian Peninsula, where it was collected in five temporary ponds in Andalusia (Spain). The characteristics of the new sites are described, the literature dealing with the European localities of the species is reviewed, and a molecular phylogenetic tree has been built, based on new and previously available mitochondrial DNA sequences, thus expanding the knowledge on the ecology and phylogeography of this rare species. The species mainly occupies small isolated temporary ponds in (semi-)arid regions, suggesting adaptations to unpredictable aquatic habitats. The existence of two molecular clades separating the Iberian from the Sicilian and Tunisian populations supports the existence of a longitudinal long-term disjunction, whereas the north-south flow is probably facilitated by migrating birds. Further research on the biota of the small water bodies of the western Mediterranean area may help to expand our knowledge on rare aquatic species, such as M. chevreuxi, and to better interpret their natural history. View Full-Text
Keywords: Andalusia; Diaptomidae; Mediterranean wetlands; Metadiaptomus chevreuxi; pond conservation; temporary ponds Andalusia; Diaptomidae; Mediterranean wetlands; Metadiaptomus chevreuxi; pond conservation; temporary ponds
►▼ Show Figures 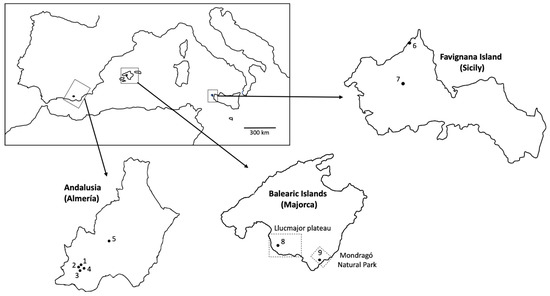 Marrone, F.; Ortega, F.; Mesquita-Joanes, F.; Guerrero, F. On the Occurrence of Metadiaptomus chevreuxi (Calanoida, Diaptomidae, Paradiaptominae) in the Iberian Peninsula, With Notes on the Ecology and Distribution of its European Populations. Water 2020, 12, 1989. https://doi.org/10.3390/w12071989


Marrone F, Ortega F, Mesquita-Joanes F, Guerrero F. On the Occurrence of Metadiaptomus chevreuxi (Calanoida, Diaptomidae, Paradiaptominae) in the Iberian Peninsula, With Notes on the Ecology and Distribution of its European Populations. Water. 2020; 12(7):1989. https://doi.org/10.3390/w12071989


Marrone, Federico, Fernando Ortega, Francesc Mesquita-Joanes, and Francisco Guerrero. 2020. "On the Occurrence of Metadiaptomus chevreuxi (Calanoida, Diaptomidae, Paradiaptominae) in the Iberian Peninsula, With Notes on the Ecology and Distribution of its European Populations" Water 12, no. 7: 1989. https://doi.org/10.3390/w12071989