This study reports the changes in glacier extent and streamflow similar to many Himalayan studies, but takes the unusual step of also linking these to downstream land use changes in Kashmir Valley. This study assessed changes in the area, snout, and equilibrium line altitude (ELA) of four parts of the Kolahoi Glacier using earth observation data from 1962 to 2018. Changes in the discharge of the two streams flowing out from Kolahoi Glacier into the Jhelum basin were also assessed between 1972 and 2018. Additionally, satellite data was used to track the downstream land system changes concerning agriculture, orchards, and built-up areas between 1980 and 2018. This analysis suggested a cumulative deglaciation of 23.6% at a rate of 0.42% per year from 1962 to 2018. The snout of two larger glaciers, G1 and G2, retreated at a rate of 18.3 m a−1 and 16.4 m a−1, respectively, from 1962 to 2018, although the rate of recession accelerated after 2000. Our analysis also suggested the upward shift of ELA by ≈120 m. The streamflows measured at five sites showed statistically significant depleting trends that have been a factor in forcing extensive land system changes downstream. Although the area under agriculture in Lidder watershed shrunk by 39%, there was a massive expansion of 176% and 476% in orchards and built-up areas, respectively, from 1980 to 2018. The conversion of irrigation-intensive agriculture lands (rice paddy) to less water-intensive orchards is attributed to economic considerations and depleting streamflow. View Full-Text
Keywords: remote sensing; glacier dynamics; land system changes; streamflows; Kashmir Himalaya remote sensing; glacier dynamics; land system changes; streamflows; Kashmir Himalaya
►▼ Show Figures 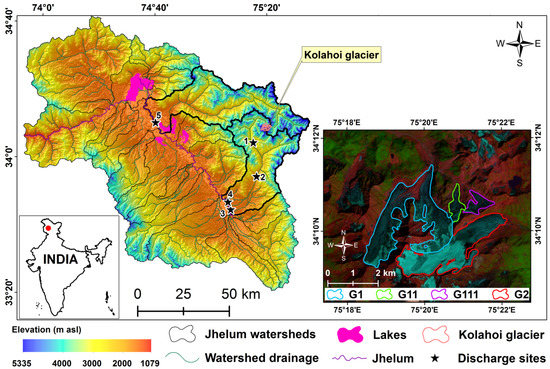