Water level modeling is a critical component of flood warning systems. A high-quality forecast requires the development of a hydraulic model that reliably accounts for the main sources of uncertainty. In this paper, a 1D hydraulic model with adaptive flow-based calibration was developed. This calibration resulted in roughness-flow relationships that allow Manning coefficients to be updated as a function of river flow, to limit errors throughout the flood cycle. An uncertainty analysis is then conducted for independent events, considering as the main source of uncertainty the error in the estimated input flows (upstream and lateral), and in the calibrated roughness coefficients. A set of parameters is generated by Latin Hypercube Sampling (LHS) from the characterization of these errors to evaluate their propagation to the variables of interest, namely water level and flow. These are evaluated by performance metrics (scores) such as the reliability diagram and the continuous rank probability score (CRPS). The adaptive flow-based calibration considerably reduced the error of the 1D model and improved its performance over time and throughout the flood events. The uncertainty analysis resulted in consistent accuracy improvements over a deterministic simulation with gains of 20% to 32%, depending on the combined parameters. Good reliability is also reached for most stations, with resulting spreads and Root Mean Square Error (RMSE) close to one another. The proposed methodology has the potential to improve the descriptive capability of 1D river hydraulic models and to increase their reliability when included in forecasting systems. View Full-Text
Keywords: uncertainty analysis; flooding; hydraulic model; adaptive calibration; reliability uncertainty analysis; flooding; hydraulic model; adaptive calibration; reliability
►▼ Show Figures 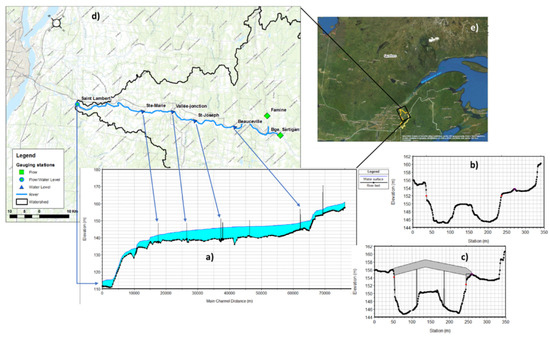