Continuity equation and the momentum equations are the basic equations for the transient flow in closed conduits [18]. where H is the piezometric head, V is the mean flow velocity, f is the Darcy–Weisbach friction factor, D is the diameter of the pipe, g is the acceleration due to gravity, and c is the wave speed.
Graphical and analytical methods give the approximate solutions of these equations only for a simple system. These equations are accurately solved by the method of characteristics and can be used to analyze a large system or a system with complex boundary conditions [19].

Method of characteristics transforms the continuity equation and the momentum equation into four ordinary differential equations. Later, these ordinary differential equations are solved by the finite difference method, which gives the two compatibility equations [19], Equations (3) and (4). where, where Hi and Qi are the piezometric head and the discharge, respectively, at any time and space, A is the area of the pipe, f is the Darcy–Weisbach friction factor, i is the pipe section number, and Δx is the length of section.
Two unknown variables, Hi and Qi, can be easily calculated with two known compatibility Equations (3) and (4).

This study emphasizes the water level oscillation in the surge tank. Thus, the turbine unit shown in Figure 1 can be simplified into a valve [20]. If the valve is located between two different pipelines, for the positive flow, the flow equation is given by [19]: when combined with Equation (3) and Equation (4) where is the discharge at the valve, τ is the valve opening, is the steady state flow, and is the steady state head drop within a valve. In the double subscript notation, the first subscript denotes pipe number and the second denotes pipe section number.

There are several graphical, analytical, and empirical methods used for surge analysis, but the results of these methods vary from one another [21]. In recent years, many model tests have been conducted using MOC, and researchers have established MOC as a reliable tool for accurate numerical analysis, especially for surge analysis [22,23,24,25]. Thus, for the given hydropower system (Figure 1), MOC is used to construct the 1-D numerical model in MATLAB; thereafter, analysis of the model is carried out.
The principle of the MOC is that the pipeline is divided into a number of equally long parts (∆x), and the time step (Δt) should be equal for all pipe segments. However, each pipe segment in a given hydropower system has different lengths and wave speeds. Thus, we select a set of and Δx so that courant’s condition is satisfied, and calculation is tabulated in Table 1.

For controlling the water level oscillations in the surge tank under transient processes, much attention should be given in the design stage and the operational stage of the hydropower system. Upsurge, downsurge, and damping of surge waves are the basic requirements to be examined for the design of the surge tank. Thus, the basic surge requirements are taken as the objective functions for optimization.

Damping influences the stability of the surge tank by dragging the water level oscillations. The surge tank should be able to control the fluctuations of water level and obtain a stable level as quickly as possible. Therefore, damping of surge waves for the worst case of upsurge and downsurge is analyzed, and maximization of damping is taken as the objective function in this study. Damping is noticeably more effective in the first than in the later stages. The relationship between the amplitude of oscillation and the time is a complex exponential expression [28]. In this study, we generalize the damping equation and calculate the damping factor using Equation (18). where is the amplitude of wave at any time t, is the initial amplitude of wave, and a is the damping factor. The damping factor is a dimensionless parameter that defines the oscillation in the surge tank that amplifies or dampens exponentially. The positive value of the damping factor in Equation (18) determines the exponential decrement of oscillation with time, while the negative value determines the exponential growth of oscillation with time.
To minimize the transient effects in the system, upsurge has to be minimized, while downsurge and damping have to be maximized, resulting in the mixed types of objective functions for optimization. Thus, the duality principle is used to transform the maximization problem into a minimization problem by multiplying the objective function with −1.

There are many multi-objective evolutionary algorithms, and it is a major challenge for scientists and researchers to select the most suitable algorithm. Further, existing multi-objective evolutionary methods have been modified, mitigating their shortcomings. With addressing all the limitations of NSGA, Deb [33] developed an improved NSGA called NSGA-II. It incorporates elitisms, non-domination, and an explicit diversity preserving mechanism, which are essential features for evolutionary methods to find the Pareto set of solutions. Many researchers have performed a detailed analysis and numerical simulation on several test problems for the comparison of evolutionary algorithms and concluded NSGA-II is a better evolutionary algorithm based on overall performance [34,35,36,37,38]. The optimization features of NSGA-II are adequate for our problem, and it also provides comparatively better performance than other multi-objective evolutionary algorithms, thus it is taken for optimization of the double chamber surge tank. NSGA-II mainly consists of six steps: initialization (setting parameters and generating the initial population), fast non-dominated sorting, crowding distance calculation, genetic operators (crossover and mutation), non-dominated sorting, recombination, and selection [33]. These steps are presented in sequential order in Figure 5.
The parameters of NSGA-II mainly consist of the population size, the crossover and mutation probabilities, and the maximum number of generations. In this study, initial population is assigned by taking a random parent population size of 40. Due to the small search space, a small population size is considered. Crossover is a convergence operation that guides population towards local minima or maxima, whereas mutation is a divergence operation that preserves genetic diversity and evades the early convergence on local minima or maxima. Since the aim is to bring the population to convergence, crossover should occur more frequently and mutation less frequently. Thus, in this study, crossover probability and mutation probability are taken as 90% and 10%, respectively. The values of crossover distribution index and mutation distribution index determine the closeness of generated offspring to their parent populations. The large distribution index value provides a greater probability to produce offspring similar to parents, resulting in a lack of diversity in generated offspring [33]. Hence, in this study, distribution index values are taken as two.
Elitism is a phenomenon applied in evolutionary methods to preserve elites of a population. The populations of offspring and parents population are combined, and the best required number of populations is selected based on their fitness value. Therefore, a good solution obtained early does not get lost until the better solution is discovered in coming generations. The evolutionary multi-objective optimization methods give only the Pareto optimal sets of the solution. However, it is not enough, and the decision maker still needs to select the single best solution out of that set.
As the ideal point method includes simple distance calculation and reduces the computational time and complexity, it is most widely used as a post optimal technique [39,40]. After obtaining the Pareto front from NSGA-II, among various post optimal techniques, ideal point method is used for selection of the optimum solution from the Pareto front. Finally, the number of generations should be greater than 100, and the optimum solution that must repeat five times in consecutive generations are taken as stopping criteria.

For controlling the water level oscillations in the surge tank under transient processes, much attention should be given in the design stage and the operational stage of the hydropower system. Upsurge, downsurge, and damping of surge waves are the basic requirements to be examined for the design of the surge tank. Thus, the basic surging conditions were analyzed by 1-D numerical modeling of a given hydropower system using MOC. Among various operational conditions in the operational stage of the hydropower system, the water level in the surge tank and the damping of the surge waves during the worst case for upsurge and downsurge were taken as the objective functions for optimization. From this study, the following conclusions are drawn:
This study optimized the double chamber surge tank and could be the cornerstone for the hydraulic optimization of the double chamber surge tank. In future research, arrangement of chambers and area of central surge shaft could be included in optimization. Research on modification in the shape of an expansion chamber for minimizing hydraulic transient could be an attractive subject for future work. 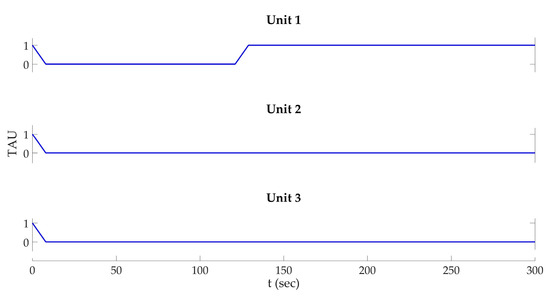 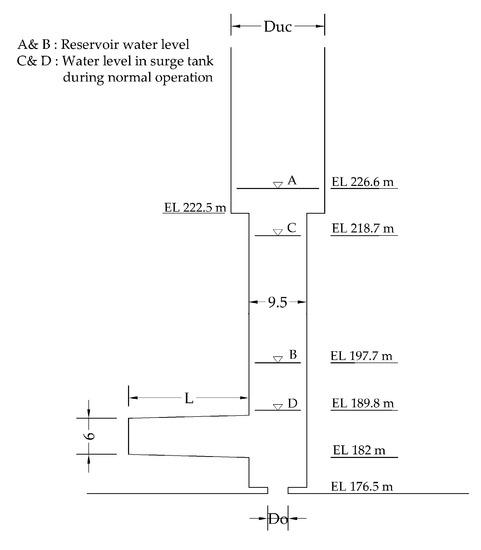 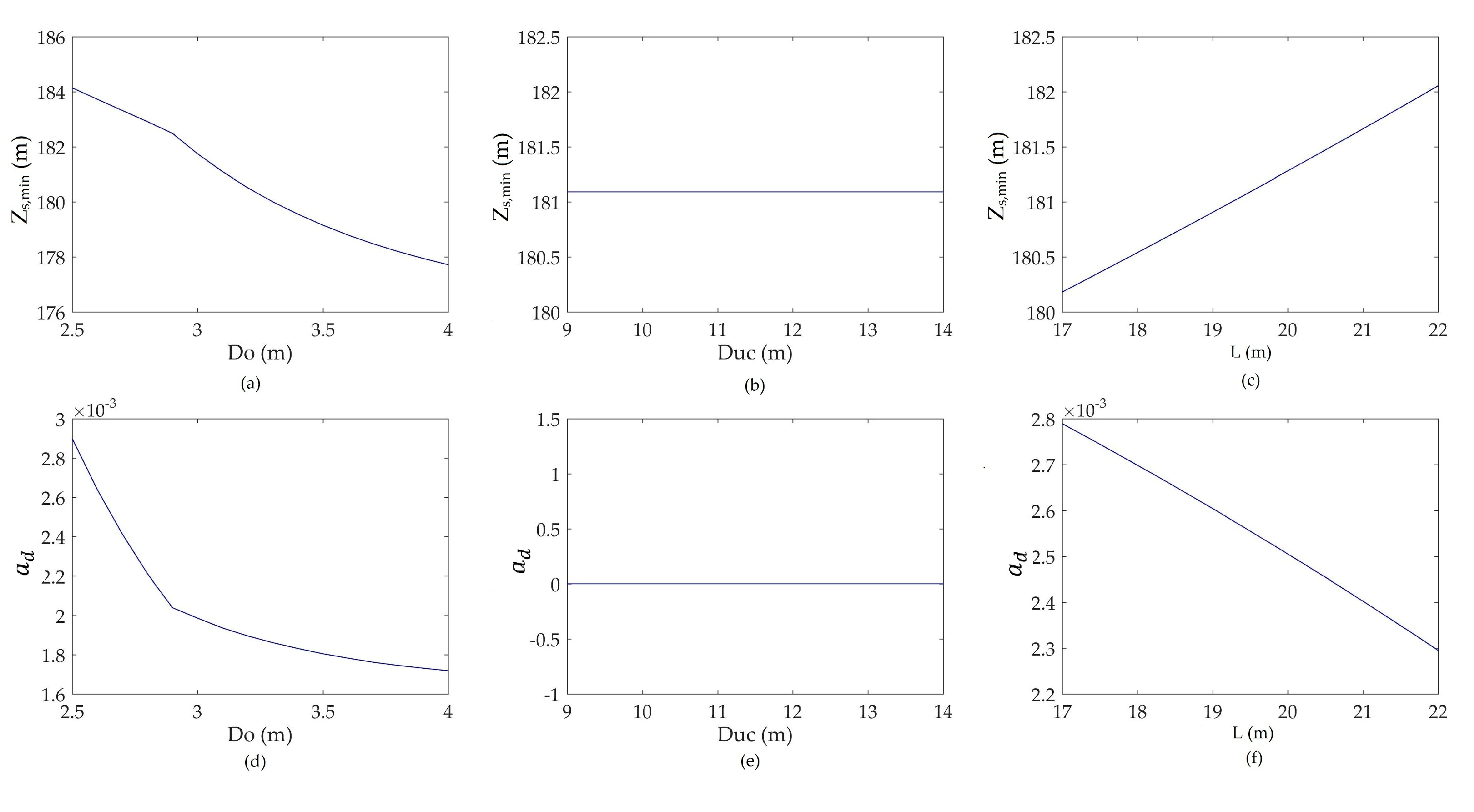 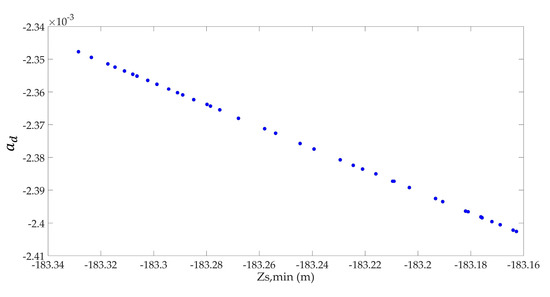 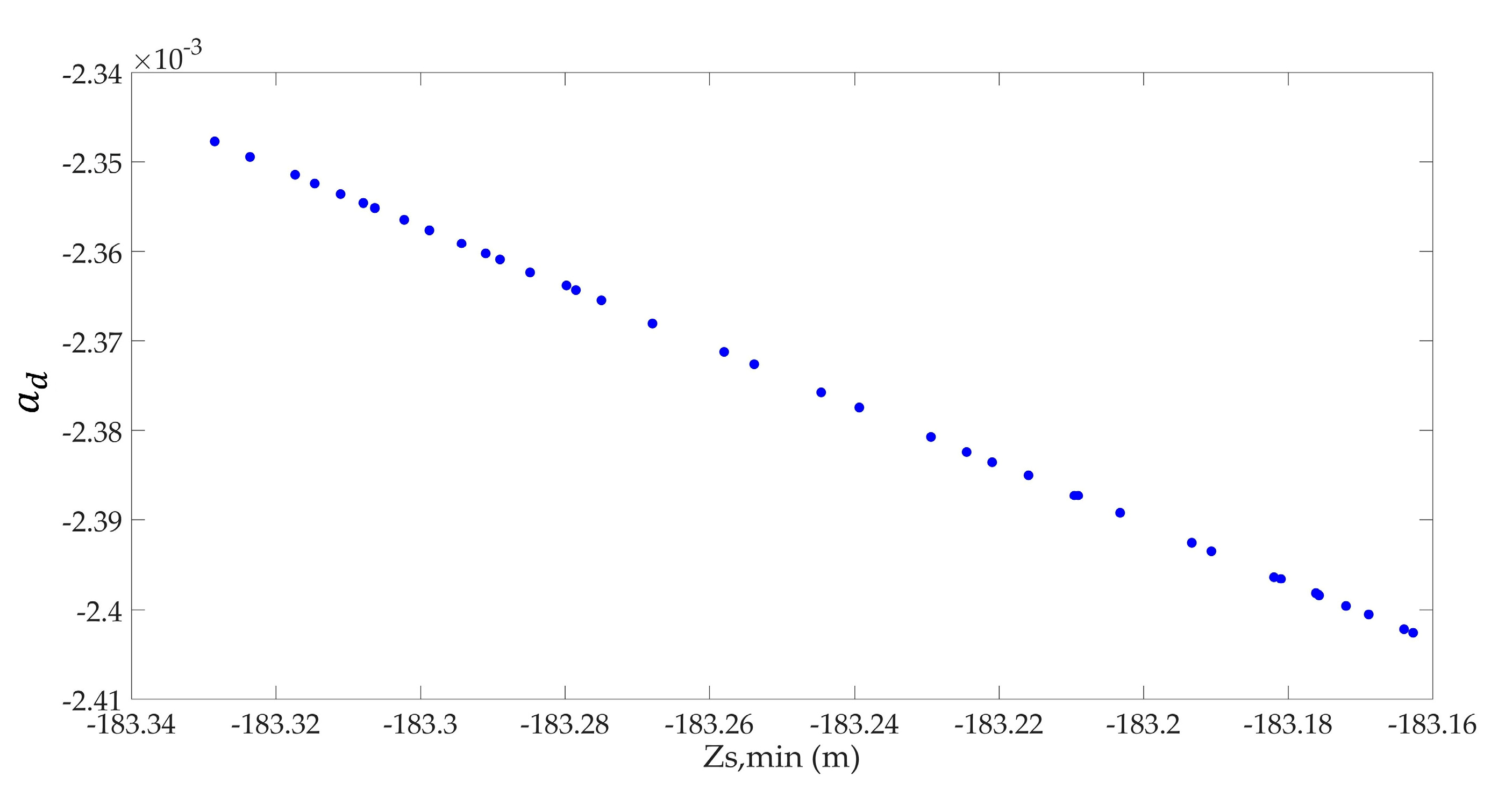 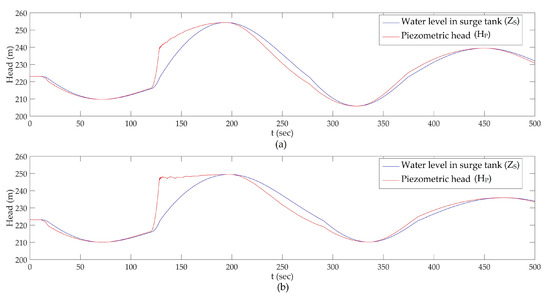 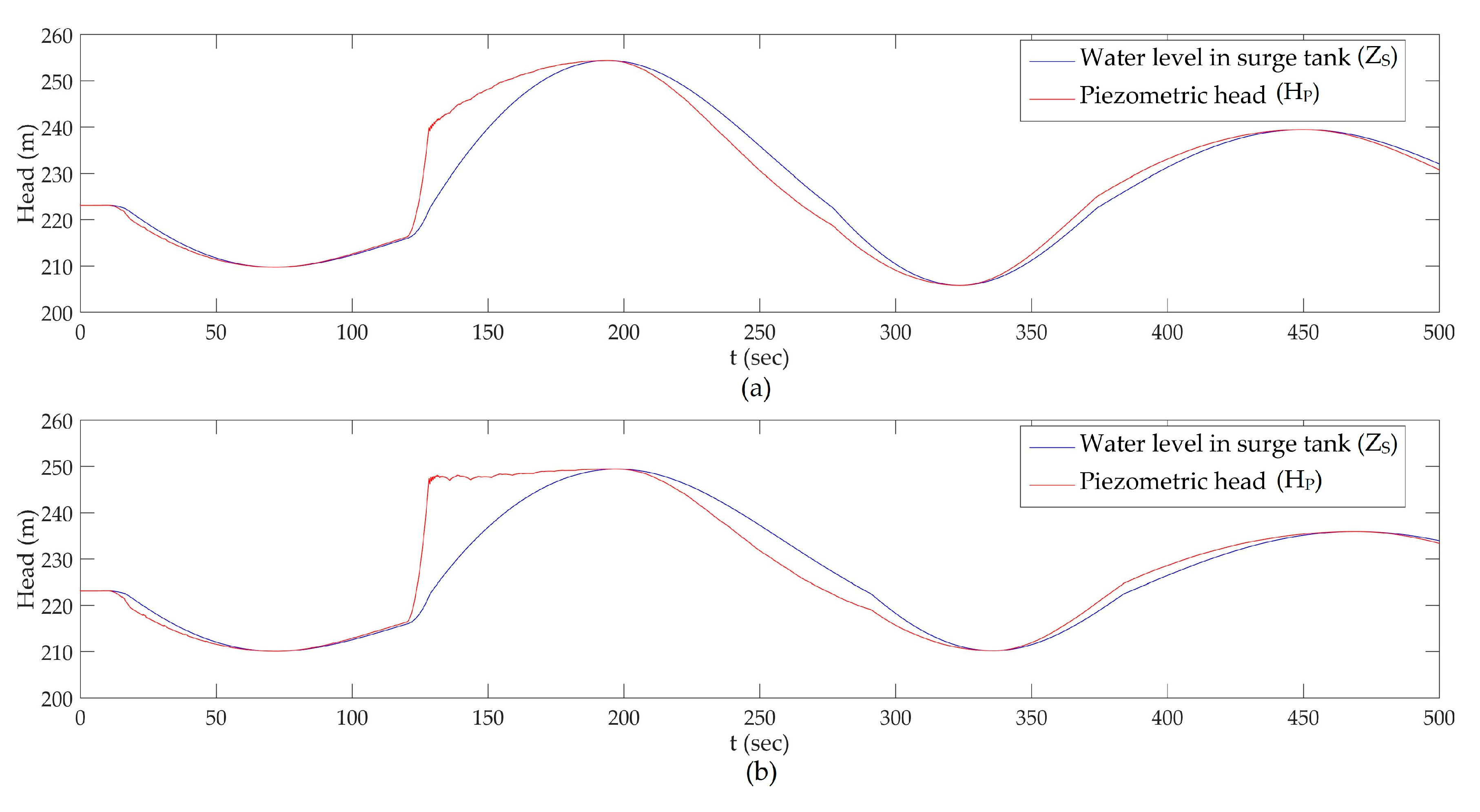