Technical Note: A Device to Directly Measure Transpiration from Vegetation Grown in Containers

This study is the result of extensive investigations of leeches on the Balkan Peninsula. Our aim was to detect actual and potential (modeled) distributions of common Erpobdellidae species, and to identify their ecological differentiation with respect to the altitudinal and waterbody type gradient. Although widespread, these species rarely live together. Intense competition is avoided by preferences for different types of habitats. This was confirmed by Pearson correlation analyses that yielded negative results. Differentiation of these species was clarified by the results of logistic Gaussian regression analyses. While Erpobdella octoculata and Dina lineata have a similar distribution along the altitudinal gradient, they prefer different waterbody types. Erpobdella vilnensis prefers higher altitudes than the other two species. Its preferred habitats are smaller rivers and streams located at altitudes from 400 to 1000 m a.s.l. Although present in all waterbody types, large lowland rivers and standing waterbodies are the preferred habitats of E. octoculata. Fast-flowing springs and streams are mostly inhabited by D. lineata. While the distribution of the species overlaps to a large degree, the ecological preferences of species differ significantly and thus they can be used as confident typological descriptors and indicators of ecological status. View Full-Text
Keywords: Hirudinea; Erpobdellidae; logistic Gaussian regression; MaxEnt; waterbody type Hirudinea; Erpobdellidae; logistic Gaussian regression; MaxEnt; waterbody type
►▼ Show Figures 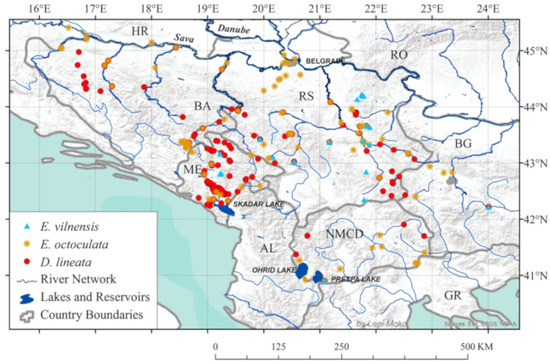