Does it Matter: Constitutionalisation, Democratic Governance, and the Human Right to Water
Next Article in Special Issue

Does Salinity Affect the Distribution of the Artificial Radionuclides 90Sr and 137Cs in Water of the Saline Lakes? A Case of the Crimean Peninsula

In the framework of radioecological monitoring, the features of the distribution of the post-Chernobyl nuclear power plant (NPP) accident artificial radionuclides of 137Cs and 90Sr in the Crimean saline lakes were studied. Samples were collected from 12 Crimean lakes with a salinity range from 2 to 400 g/L in 2014–2017. Concentration of 90Sr varied from 5.9 to 313.6 Bq/m3, and 137Cs from 0.8 to 106.7 Bq/m3. Closing of the North Crimean Canal resulted in a decrease in radionuclide concentration in the lakes. About 61% of the total variability of 90Sr and 33% of 137Cs in lake water can be explained by salinity changes. The salinity affects the behavior of radionuclides in water, mainly influencing their solubility, on isotope exchange between the solution and bottom sediments, and also, probably, through its influence on accumulation of isotopes by aquatic organisms. Salinity is not the alone factor determining the behavior of radionuclides in the lakes, it only acts by interacting with other factors. View Full-Text
Keywords: radioactivity; salinity; 90Sr; 137Cs; Crimea; artificial radionuclides radioactivity; salinity; 90Sr; 137Cs; Crimea; artificial radionuclides
►▼ Show Figures 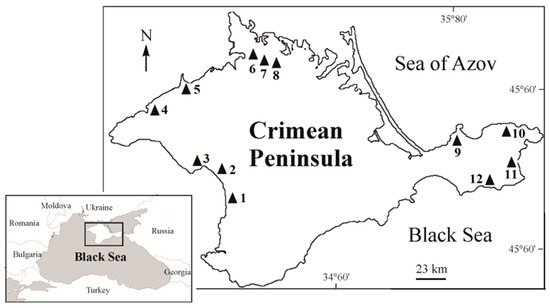 
Mirzoeva, Natalia, Nickolai Shadrin, Svetlana Arkhipova, Oksana Miroshnichenko, Natalia Kravchenko, and Elena Anufriieva. 2020. "Does Salinity Affect the Distribution of the Artificial Radionuclides 90Sr and 137Cs in Water of the Saline Lakes? A Case of the Crimean Peninsula" Water 12, no. 2: 349. https://doi.org/10.3390/w12020349