This article provides the first comprehensive list of alien macroinvertebrate species registered and/or established in aquatic ecosystems in Serbia as a potential threat to native biodiversity. The list comprised field investigations, articles, grey literature, and unpublished data. Twenty-nine species of macroinvertebrates have been recorded since 1942, with a domination of the Ponto-Caspian faunistic elements. The majority of recorded species have broad distribution and are naturalized in the waters of Serbia, while occasional or single findings of seven taxa indicate that these species have failed to form populations. Presented results clearly show that the Danube is the main corridor for the introduction and spread of non-native species into Serbia.
Keywords: Serbia; inland waters; allochthonous species; introduction Serbia; inland waters; allochthonous species; introduction

The Water Framework Directive (WFD) [1] represents key regulation and one of the most important documents in the European Union water legislation since it was adopted in 2000. A primary purpose of the directive was to improve and integrate the way water bodies are managed across Europe with the principal aim of achieving at least “good ecological and chemical status” for all water bodies. The original target for achieving good status was 2015, but it has been extended to 2021 or 2027 [2].
The ecological status of inland waters is one of the two main determinants of the WFD [1]. Aquatic macroinvertebrates are a very important component of freshwater ecosystems and one of the five biological quality elements. Although the text of the directive does not specifically mention alien or invasive species, it is obvious that they could pose great pressure and act as a threat to aquatic communities and ecosystems and indirectly affect the achievement of good status of water bodies [3]. Serbia, as a candidate country for entry to the European Union since 2012, must implement all EU directives, including the WFD with its specific goals in water protection, improvement, and sustainable use.
Over the past 20 years, research on allochthonous macroinvertebrate species has intensified in Serbia. A high level of biocontamination in aquatic ecosystems has already been confirmed and allochthonous species have been recorded among invertebrates and vertebrates [4]. Previous research on allochthonous macroinvertebrate species was focused on individual species. A detailed overview of only half of allochthonous species is given up to now: Branchiura sowerbyi [5,6], Corbicula fluminea and C. fluminalis [7], Craspedacusta sowerbii [8], Dreissena rostriformis bugensis [9], Faxonius limosus [10], Hypania invalida [11], Eriocheir sinensis [12,13], Manayunkia caspica [14], Physa acuta [15,16,17] and Sinanodonta woodiana [18]. In addition, allochthonous species of different aquatic systems in Serbia were the subject of several publications, and the most comprehensive research was carried out on the Danube, Sava, Tisa, and Velika Morava rivers [4,19,20,21,22,23,24,25,26,27].
Based on the obtained data, the following goals have been set—identification and review of the present allochthonous macroinvertebrate species—providing the list of alien taxa, taxonomic and zoogeographic analyses of allochthonous species, and possible ecological implications.

In Serbia, there are thousands of watercourses with a total length of 65,980 km [28] predominantly small and medium-sized rivers, up to 100 km in length. According to [29] four groups of watercourses have been differentiated. The first group is typical lowland, slow-flowing rivers—the Danube, Sava, and Tisa. The second group is comprised of rivers within the Velika Morava basin, and the third group is represented by the Drina, Lim, and Nera rivers. The Nišava River was found to be a separate system.
Limnological investigations of Serbian waters were initiated in 1947 and have continued up to now. The present paper brings together all of the available information on the allochthonous macroinvertebrate species in the watercourses of Serbia. The list was compiled from peer-reviewed articles, monographs, books, and grey literature (reports, thesis, and unpublished data). Further, comprehensive field investigations were performed in the period 2000–2019 at a total of 402 sampling sites.
The study of aquatic ecosystems covered the entire length of all major river basins. The river system of Serbia includes ten main drainages, while detailed research has been performed on a total of nine of them—the Danube, Sava, Drina, Kolubara, Zapadna Morava, Južna Morava, Velika Morava, Timok and rivers belonging to the Aegean basin. Although the Tisa river is a tributary of the Danube, it has been presented as a separate river system regarding numerous records of allochthonous species. The most intense research was conducted in the Danube, Sava, Tisa, and Velika Morava basins. Since 2000, three international surveys [30,31,32], numerous national investigations, and routine monitoring surveys were carried out that resulted in the most detailed and precise data on alien fauna. However, during the last ten years, research of small and medium-sized watercourses in the rest of the region has also intensified, encompassing the entire territory of Serbia and providing an up-to-date inventory of alien species. During field investigations, benthic samples were collected with a benthic hand net (mesh size 500 µm), benthic dredge (mesh size 250 μm), and Van Veen grab (270 cm2). Additionally, free diving was carried out at depths between 0.4 and 7 m to obtain specimens of malacofauna. The sampling method was conditioned by the type of examined waterbody. Sampling in shallow bank region with benthic hand net was conducted according to multihabitat sampling procedure [33] from all available types of microhabitat representing with more than 5% of the total habitat area along the sampling stretch (100 m). Grab and dredge were used only in cases where samples could not be collected by hand net (great depth or flow velocity). In the case of samples collected by Van Veen grab, the animals were separated from the sediment using a 200-μm sieve.
The list of allochthonous species was compiled on the basis of the currently valid taxonomic nomenclature using the World Registered of Marine Species [34]. The classification of allochthonous species included zoogeographic and horologic analyses of species, as well as analysis of the pathway of introduction. The year of the first discovery of an introduced species was based on the date of the first publication.

In watercourses of Serbia, a total of 29 allochthonous species of macroinvertebrates were recorded (Table 1, Figure 1).
The largest number of species, 18 (62.07%), originates from the Ponto-Caspian region, while Asia and North America are represented by 5 species each (17.24%). One recorded species (3.45%) is from the Western Pacific.
Among 29 recorded species the largest number of allochthonous species belongs to Malacostraca (15 species, Figure 2), while members of Bivalvia are represented with five species. Other six groups (Gastropoda, Oligochaeta, Polychaeta, Turbellaria, Hydrozoa and Phylactolaemata) are represented with a total of nine species.
Current distribution of the species based on literature data and field investigation in Serbian major river basins is given in Table 2. Distribution of recorded alien species is predominantly observed along the slow-flowing lowland rivers with a dominance of fine sediment (Danube, Sava, Tisa) and Velika Morava. In total, 28 species were recorded in the Danube, followed by Sava (16 species), Tisa (15 species), and Velika Morava River (10 species). Six macroinvertebrate species were detected in Zapadna Morava basin, while only two alien species were recorded in Južna Morava, Drina, and Kolubara basin, and one species in Timok basin. Spatially, the percentage participation of alien species in the macroinvertebrate community ranged from 0.9% to 33.33% in the Danube, 1.01% to 17.67% in the Sava, 0.33% to 57.58% in the Tisa and 1.03% to 71.12% in the Velika Morava River. In other watercourses, alien species occur irregularly in low numbers.
The highest number of alien species per sampling site was recorded in the Danube, upstream from the mouth of Velika Morava (14 species). The average number of alien species per river was also the highest in the Danube (8 species) while the average proportion of alien species to a total number of macroinvertebrate taxa was 10.19% in 2007 and much higher in 2013, 25.53%.
The most widespread species in Serbian waters are Physella acuta and Dikerogammarus villosus. P. acuta was recorded at 77 sites in a total of eight river basins, predominantly in small- and medium-sized watercourses up to 500 m above sea level. D. villosus was recorded in 48 sites, along the entire course of the Danube, and in localities in the Sava, Tisa, Velika Morava, and a canal network in the northern part of the country. A single finding of two specimens was from Ljubišnica (Zapadna Morava basin). Broad distribution within the covered area was assessed also for Branchiura sowerbyi, Sinanodonta woodiana, Corbicula fluminea, Dreissena polymorpha Chelicorophiun curvispinum, and Faxonius limosus. Beside distribution in lowland rivers, findings of D. polymorpha in the Drina and C. curvispinum in the Ljubišnica and Mali Rzav (Zapadna Morava basin) should be pointed out. Occasional or single findings of seven species (E. sinensis, Craspedacusta sowerbii, Dugesia tigrina, Hemimysis anomala, Katamysis warpacowsky, Corbicula fluminalis, and Ferrissia fragilis) indicate that these species have not yet been naturalized in Serbian waters.

The preparation of the manuscript was supported by the Ministry of Education, Science and Technological Development of the Republic of Serbia, Contract No. 451–03–68/2020–14/200007 and International Commission for the Protection of the Danube River (ICPDR).

We would like to express our gratitude to our colleagues from the Department for Hydroecology and Water Protection Institute for Biological Research “Siniša Stanković”, University of Belgrade and Department for Biology and Ecology, Faculty of Science and Mathematics, University of Kragujevac for their participation in material collection. We would also like to thanks to Goran Poznanović for improvement of the text and constructive comments during preparation of the manuscript. 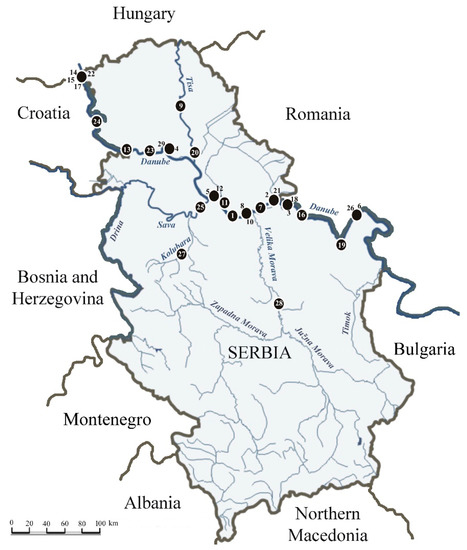