Net Primary Production Predicted by the Proportion of C:N:P Stoichiometric Ratio in the Leaf-Stem and Root of Cynodon Dactylon (Linn.) in the Riparian Zone of the Three Gorges Reservoir

The identification of changes in the ice phenomena (IP) in rivers is a significant element of analyses of hydrological regime features, of the risk of occurrence of ice jam floods, and of the ecological effects of river icing (RI). The research here conducted aimed to estimate the temporal and spatial changes in the IP in a lowland river in the temperate climate (the Noteć River, Poland, Central Europe), depending on air temperature (TA) and water temperature (TW) during the multi-annual period of 1987–2013. Analyses were performed of IP change trends in three RI phases: freezing, when there appears stranded ice (SI), frazil ice (FI), or stranded ice with frazil ice (SI–FI); the phase of stable ice cover (IC) and floating ice (FoI); and the phase of stranded ice with floating ice (SI–FoI), frazil ice with floating ice (FI–FoI), and ice jams (IJs). Estimation of changes in IP in connection with TA and TW made use of the regression model for count data with a negative binomial distribution and of the zero-inflated negative binomial model. The analysis of the multi-annual change tendency of TA and TW utilized a non-parametric Mann–Kendall test for detecting monotonic trends with Yue–Pilon correction (MK–YP). Between two and seven types of IP were registered at individual water gauges, while differences were simultaneously demonstrated in their change trends over the researched period. The use of the Vuong test confirmed the greater effectiveness of estimates for the zero-inflated model than for the temporal trend model, thanks to which an increase in the probability of occurrence of the SI phenomenon in the immediate future was determined; this, together with FI, was found to be the most frequently occurring IP in rivers in the temperate climate. The models confirmed that TA is the best estimator for the evaluation of trends of the occurrence of IC. It was shown that the predictive strength of models increases when thermal conditions are taken into consideration, but it is not always statistically significant. In all probability, this points to the impact of local factors (changes in bed and valley morphology and anthropogenic pressure) that are active regardless of thermal conditions and modify the features of the thermal-ice regime of rivers at specific spatial locations. The results of research confirm the effectiveness of compilating a few models for the estimation of the dependence of IP trends on air and water temperature in a river. View Full-Text
Keywords: river icing; estimation; thermal conditions; regression models for count data; negative binomial distribution; zero-inflated model; Central Europe river icing; estimation; thermal conditions; regression models for count data; negative binomial distribution; zero-inflated model; Central Europe
►▼ Show Figures 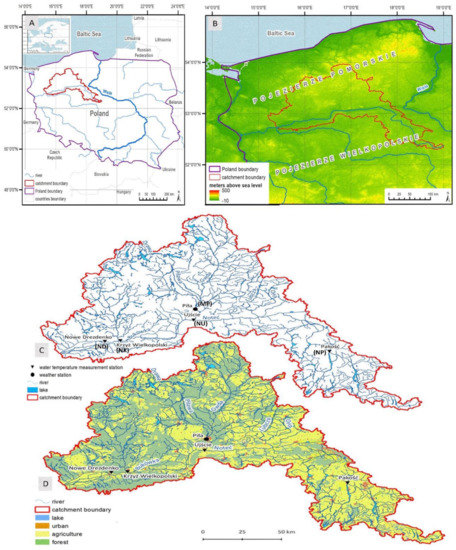