Phytoplankton Community Response to Nutrients, Temperatures, and a Heat Wave in Shallow Lakes: An Experimental Approach

Impact of Nutrients, Temperatures, and a Heat Wave on Zooplankton Community Structure: An Experimental Approach

Shallow lakes are globally the most numerous water bodies and are sensitive to external perturbations, including eutrophication and climate change, which threaten their functioning. Extreme events, such as heat waves (HWs), are expected to become more frequent with global warming. To elucidate the effects of nutrients, warming, and HWs on zooplankton community structure, we conducted an experiment in 24 flow-through mesocosms (1.9 m in diameter, 1.0 m deep) imitating shallow lakes. The mesocosms have two nutrient levels (high (HN) and low (LN)) crossed with three temperature scenarios based on the Intergovernmental Panel on Climate Change (IPCC) projections of likely warming scenarios (unheated, A2, and A2 + 50%). The mesocosms had been running continuously with these treatments for 11 years prior to the HW simulation, which consisted of an additional 5 °C increase in temperature applied from 1 July to 1 August 2014. The results showed that nutrient effects on the zooplankton community composition and abundance were greater than temperature effects for the period before, during, and after the HW. Before the HW, taxon richness was higher, and functional group diversity and evenness were lower in HN than in LN. We also found a lower biomass of large Cladocera and a lower zooplankton: phytoplankton ratio, indicating higher fish predation in HN than in LN. Concerning the temperature treatment, we found some indication of higher fish predation with warming in LN, but no clear effects in HN. There was a positive nutrient and warming interaction for the biomass of total zooplankton, large and small Copepoda, and the zooplankton: phytoplankton ratio during the HW, which was attributed to recorded HW-induced fish kill. The pattern after the HW largely followed the HW response. Our results suggest a strong nutrient effect on zooplankton, while the effect of temperature treatment and the 5 °C HW was comparatively modest, and the changes likely largely reflected changes in predation. View Full-Text
Keywords: cell size; climate change; ecosystem stability; freshwater; global warming; mesocosm; shallow lakes; multiple stressors cell size; climate change; ecosystem stability; freshwater; global warming; mesocosm; shallow lakes; multiple stressors
►▼ Show Figures 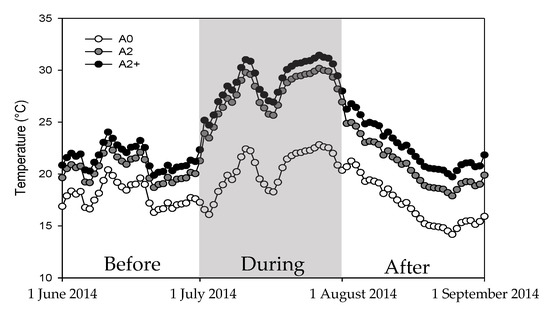