Characterization of 1,4-Dioxane Biodegradation by a Microbial Community

The mineralization of 1,4-dioxane was investigated to ensure that the mixed culture was able to completely degrade 1,4-dioxane into CO2 and biomass as the final products. A series of 500 mL flasks containing 100 mL of mineral medium were sealed with butyl rubber stoppers. Twenty milliliters of NaOH solution (0.1N) in a 50 mL vial were placed in the flask, as shown Figure 1. Headspace provided oxygen for the mixed culture to degrade 1,4-dioxane by vigorously stirring the medium. Standard HCl solution (0.1N) was used to titrate the amount of NaOH remaining and CO2 was calculated based on the amount of residual NaOH. The test sample was inoculated with the enriched culture and amended with 100 mg/L of 1,4-dioxane. Biotic control was inoculated with the mixed culture without any carbon source and abiotic control amended with 100 mg/L of 1,4-dioxane without inoculation of the mixed culture.
Mass balance of CO2 was computed using the following equation:
Recovered CO2 as 1,4-D = total CO2 absorbed in test sample − CO2 absorbed in biotic control − CO2 produced from cells synthesis
stirring vigorously medium culture:

2.3. Biodegradation at Various Initial Concentrations and Degradation Kinetics of 1,4-dioxane

The experiment was performed in a matrix of 100 mL flasks containing 50 mL of the sample with different concentrations of 1,4-dioxane. The enriched culture was distributed equally in 16 flasks containing 50 mL of BSM, while seven duplicated flasks were amended with different concentrations of 1,4-dioxane as the sole carbon source, ranging from 5 mg/L, 50 mg/L, 200 mg/L, 500 mg/L, 1000 mg/L, 1500 mg/L to 2000 mg/L for the test sample. Another two flasks that were not served 1,4-dioxane were used for biotic control. Two duplicated flasks containing 200 mg/L and 1000 mg/L of 1,4-dioxane were not inoculated with consortium for abiotic controls. All tests were performed in duplicate, incubated at room temperature on a shaker at 160 r/min. Cell production was measured as the difference of MLVSS at the initial and at the end points of the experiment.

The test was conducted to investigate the effect of normal carbon source in wastewaters as ethylene glycol and structural analog of 1,4-dioxane as tetrahydrofuran (THF), to biodegradation of 1,4-dioxane by the microbial community. A series of 100 mL flasks containing 50 mL medium were inoculated with 500mg/L of biomass concentration and 100 mg/L 1,4-dioxane. Duplicated flasks were considered as controls with the sole carbon source 1,4-dioxane, while three duplicate flasks containing 1,4-dioxane along with 75 and 150 mg/L of THF were used to evaluate the influence of THF; a further three duplicate flasks were added with 50, 100, 200 mg/L of ethylene glycol to investigate the effect of ethylene glycol. The flasks with 75 and 150 mg/L of THF as a sole carbon source were also investigated for comparison.

The concentration of 1,4-dioxane during incubation was measured by GC-MS (Perkin Elmer Clarus 600) using a liquid–liquid extraction (LLE). The GC/MS analysis was conducted using an Elite-624 column (30 mm × 0.25 mm × 1.4 mm, Perkin Elmer, Waltham, MA, USA) and a helium gas (99.999%, flow of 1 mL/min). The input temperature was set at 240 °C with the initial oven temperature raised to 2400 °C from 400 °C with the total analysis time of 10 min. Soluble COD (chemical oxygen demand) was also measured to double-check the 1,4-dioxane data; a DR/2010 Portable Data Logging Spectrophotometer (HACH) was used. The concentration of bacteria was measured as Mixed Liquor volatile Suspended Solid (MLVSS) according to the standard method.

When microorganisms utilize 1,4-dioxane as an electron-donor for synthesis, a portion of its electrons fe0 is initially transferred to the electron accepter to provide energy for conversion of the other portion of electrons fs0 into microbial cells, as illustrated in Figure 2. A part of the electrons in fs0 are transferred to the acceptor to generate more energy, and another part is converted into a non-active organic cell residue [31] (Bruce E. Rittman and Perry L. McCarty, Environmental biotechnology principles and Applications).
The mineralization of 1,4-dioxane was investigated to ensure that the mixed culture was able to completely degrade 1,4-dioxane into CO2 and biomass as the final products. The result was interpreted based on CO2 bio-produced and cells associated as an increase in MLVSS.
Carbon dioxide CO2 was produced from the 3 reactions below:
Bio-produced CO2 and CO2 in headspace were driven into the 20 mL of NaOH. For this investigation, the concentration of 1,4-dioxane in liquid portion was almost degraded, CO2 recovered was trapped into NaOH solution. Mineralized CO2 from 1,4-dioxane was equal to the difference between CO2 absorbed in the test samples and biotic control. The fate of 1,4-dioxane during biodegradation was calculated as the average of duplicate tests on the mixed culture grown on 1,4-dioxane as the sole carbon source (Table 1). The final distribution of 1,4-dioxane into the final products derived from biodegradation after 60 h by the microbial community shows that at least 36.9% of 1,4-dioxane was present in the cell mass. The majority of 1,4-dioxane (58.3%) was converted to CO2, while 0.8% remained in the liquid and 4.0% escaped from liquid as volatile organic compounds (VOC). These data document that the enrichment culture can utilize 1,4-dioxane as the sole carbon source and completely oxidize 1,4-dioxane into CO2 and biomass.
The absence of organic products other than biomass that accumulated in the medium indicates that 1,4-dioxane was completely mineralize by the enriched culture. There was no information on intermediates of 1,4-dioxane degradation, since only 1,4-dioxane pick was found during the analysis. A wide range of 1,4-dioxane initial concentrations was studied in the batch reactors, the degradation and specific degradation rates were found to increase with the increase in the initial concentration within the studied range. The results indicate that 1,4-dioxane was an unlimited substrate for the enriched culture, implying that 1,4-dioxane does not undergo self-inhibition during biodegradation.

The batch reactor model was applied to determine the cell yield and endogenous decay rate of the mixed culture during 1,4-dioxane biodegradation. The duplicate abiotic controls were performed to determine the loss of 1,4-dioxane as volatilization; this volatile portion was calculated as 4.35% based on the initial and the end point concentrations of 1,4-dioxane. The cell yield and endogenous decay rates were estimated based on the observation of increase and decrease in the biomass of the tests and biotic control, respectively.

The biotic control was used to determine the decay rate of the mixed culture. Assuming that the loss of active biomass is a first order function, the fraction of inert biomass was ignored.
The rate of endogenous decay was modeled by Equation (5):
The experiment was conducted for the initial biomass concentration of 522 mg/L. Figure 3 shows the decrease in biomass concentration after 70 h in the 3-point curve; the negative slope yielded the decay rate coefficient kd. The endogenous-decay coefficient obtained in this study was kd = 0.023 day−1.

The observed cell yield was estimated by linearizing the cell mass increase with 1,4-dioxane consumption (Equation (6)).
In this study, cell yield was estimated based on the observation of biomass production measured relative to the substrate used in the test sample, Yobs = 0.407 mg MLVSS/mg 1,4-dioxane.
The true and the observed yields have the following relationship (Equation (7)):
By knowing kd = 0.023 day−1, Yobs = 0.407 mg VSS/mg 1,4-dioxane and, in the batch test, SRT = HRT = 70 h; therefore, from Equation (4), YT can be calculated as follows: YT = 0.434 mg VSS/mg 1,4-dioxane.

3.2.3. Biodegradation of 1,4-Dioxane with Different Concentrations and Kinetics

The effect of substrate concentration on microbial community was studied at various initial 1,4-dioxane concentration ranging from 5, 50, 200, 500, 1000, 1500 to 2000 mg/L. All tests were inoculated with the same biomass concentration, VSS = 655 mg/L. The complete degradation of 1,4-dioxane was obtained in all initial concentrations. Figure 4 shows time course variations in 1,4-dioxane at different initial concentrations during the incubation time.
The degradation rates (mg substrate/L/h) at various initial concentrations which were calculated based on the linear slopes are given in Table 2. The degradation rate increased with the increase in initial concentrations, which indicates that 1,4-dioxane was the unlimited substrate for enriched culture. This observation implied that 1,4-dioxane does not undergo self-inhibition during biodegradation.
The initial specific degradation rates were calculated as the average slopes during first observation of 1,4-dioxane at 48 h with 100, 1500 and 2000 mg/L, at 22 h with 200, 500 mg/L and at 16 h with 50 mg/L. The initial biomass concentration was 655 mg/L, and the increase in biomass was calculated based on the observed cell yield obtained above. The kinetic parameters KS and qmax were determined by fitting a curve to the Monod equation of substrate utilization, as shown in Figure 5.
The maximum specific growth rate was as relationship with true yield and substrate utilization rate coefficients:
The kinetic parameters KS and qmax were determined by fitting the curve to the Monod equation of substrate utilization, and Table 3 shows the values of kinetic parameters.
The specific degradation rate of 1,4-dioxane in the present study was found to be much lower than those reported in previous studies on pure culture, qmax = 1.09 mg 1,4-dioxane/h/mg protein of Pseudonocardia dioxanivoran CB 1190 and qmax= 0.1 mg 1,4-dioxane/h/mg protein of Pseudonocardia benzenivorans B5 [32], or on mixed culture, qmax = 0.45 ± 0.03 mg 1,4-dioxane/mg TSS/day in the presence of THF as growth substrate [33]. This was expected since the mixed culture, including various kinds of bacteria, is able to survive in the presence of 1,4-dioxane; there may be only one or two strains that could use 1,4-dioxane as the carbon source. The KS obtained in this study was relatively low (KS = 9.42 mg/L) as compared to those reported in pure culture [32]; KS = 159 ± 44 mg/L of Pseudonocardia dioxanivoran and KS = 330 ± 82 mg/L of Pseudonocardia benzenivorans. These findings could imply that the enriched culture has a high affinity with 1,4-dioxane during biodegradation.

3.4. Effects of THF on 1,4-Dioxane Biodegradation 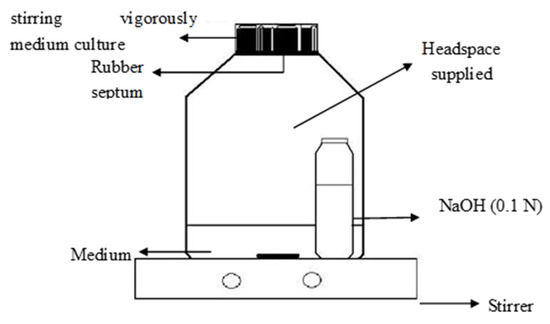 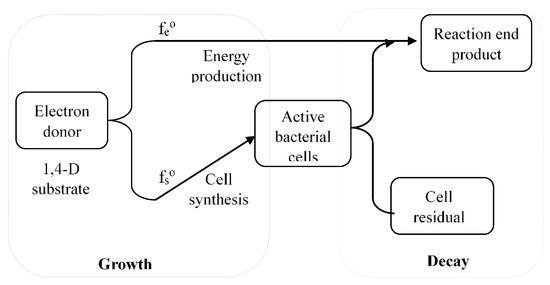 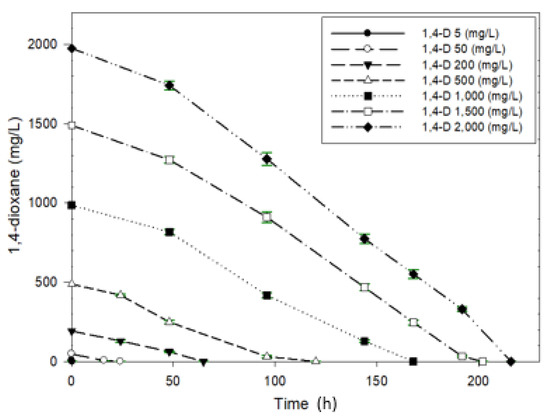 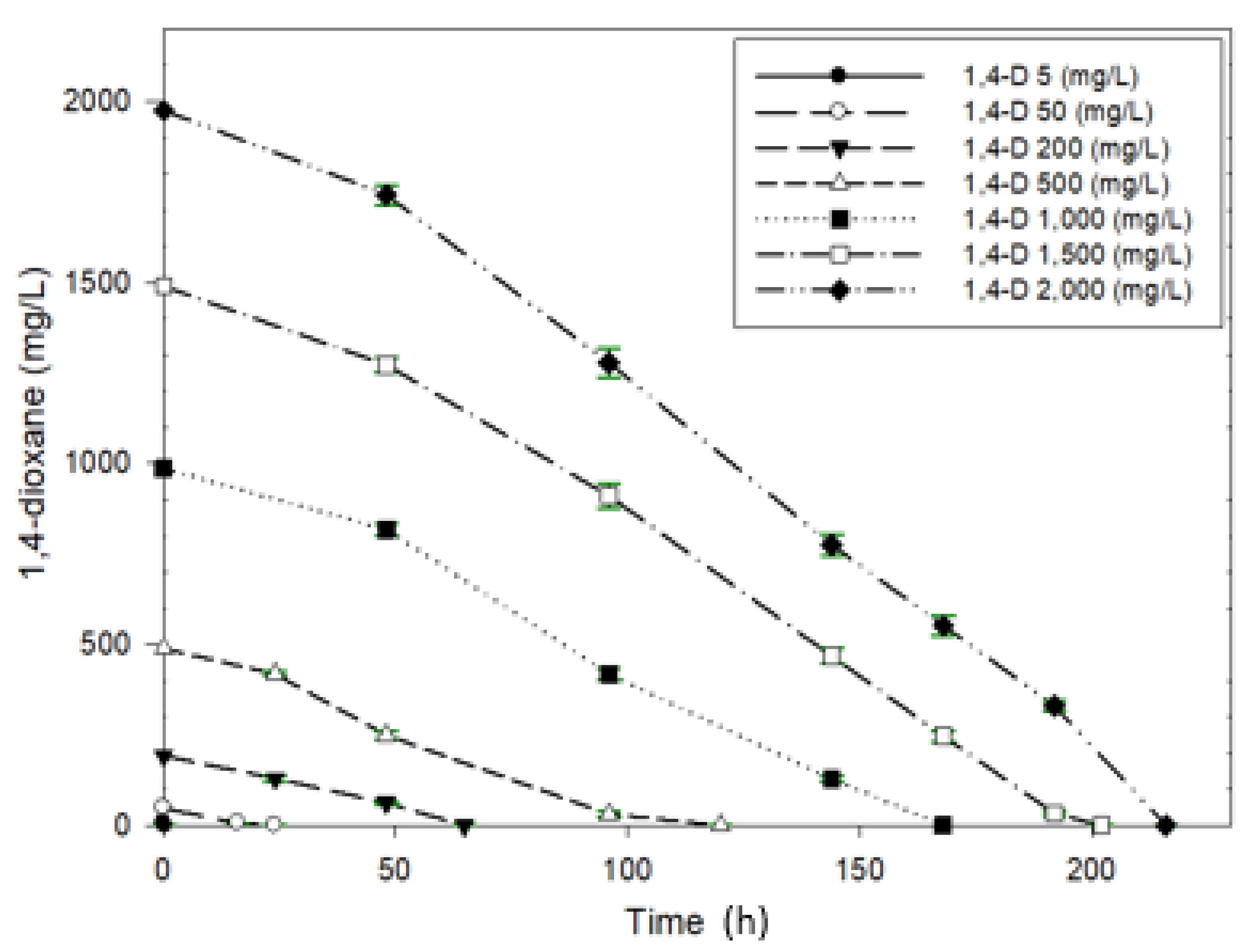 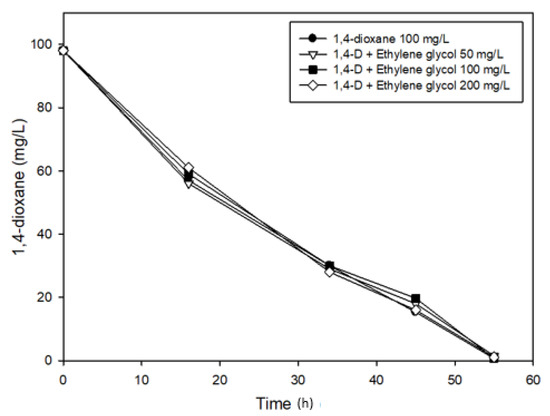 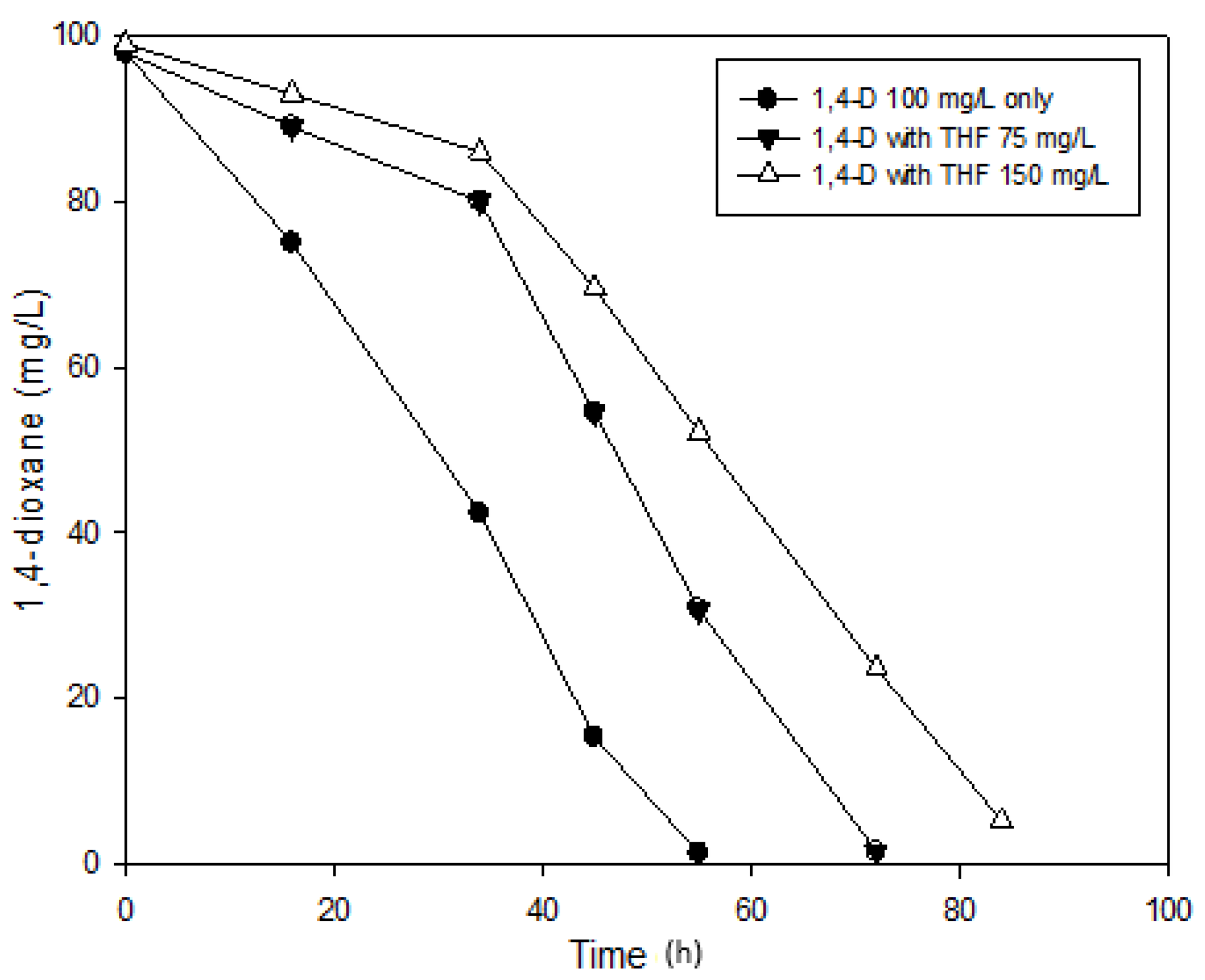