Law and Politics in River Basin Management: The Implementation of the Water Framework Directive in The Netherlands
Next Article in Special Issue

Drought Monitoring Based on Remote Sensing in a Grain-Producing Region in the Cerrado–Amazon Transition, Brazil

Drought is a natural disaster that affects a country’s economy and food security. The monitoring of droughts assists in planning assertive actions to mitigate the resulting environmental and economic impacts. This work aimed to evaluate the performance of the standardized precipitation index (SPI) using rainfall data estimated by orbital remote sensing in the monitoring of meteorological drought in the Cerrado–Amazon transition region, Brazil. Historical series from 34 rain gauge stations, in addition to indirect measurements of monthly precipitation obtained by remote sensing using the products CHIRPS-2.0, PERSIANN-CDR, PERSIANN-CCS, PERSIANN, GPM-3IMERGMv6, and GPM-3IMERGDLv6, were used in this study. Drought events detected by SPI were related to a reduction in soybean production. The SPI calculated from the historical rain series estimated by remote sensing allowed monitoring droughts, enabling a high detailing of the spatial variability of droughts in the region, mainly during the soybean development cycle. Indirect precipitation measures associated with SPI that have adequate performance for detecting droughts in the study region were PERSIANN-CCS (January), CHIRPS-2.0 (February and November), and GPM-3IMERGMv6 (March, September, and December). The SPI and the use of precipitation data estimated by remote sensing are effective for characterizing and monitoring meteorological drought in the study region. View Full-Text
Keywords: agricultural planning; soybean; climate risk; natural disaster; water resource management agricultural planning; soybean; climate risk; natural disaster; water resource management
►▼ Show Figures 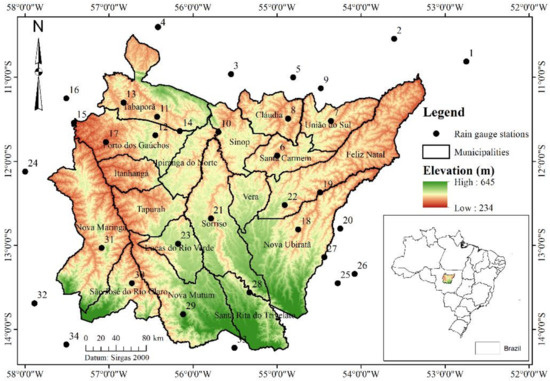