Improvement of SCS-CN Initial Abstraction Coefficient in the Czech Republic: A Study of Five Catchments

Application of the SCS–CN Method to the Hancheon Basin on the Volcanic Jeju Island, Korea

2.2. Estimation of CN by Analyzing the Rainfall–Runoff Data

It is possible to derive CN by analyzing the rainfall–runoff data. The derived CN varies greatly, depending on the rainfall event. Sometimes CN(I) can be estimated higher than CN(II). It is also possible that CN(III) is estimated smaller than CN(II) [38]. This is simply because the possible range of CN(II) is very wide [6,39]. When estimating CN from the observed rainfall–runoff data, some variation may not be avoidable. Based on previous studies [40,41,42,43], the CN of a basin is found to decrease as the total precipitation increases. Even though the standard pattern is general [40], another two patterns are also found [40,41,42]. Various methods for determining the representative CN for a basin have also been proposed by many studies [44,45,46,47].
In fact, the estimation of CN for a rainfall event is straightforward if the ratio is fixed. Simply the CN can be estimated by solving Equations (4) and (5) with observed P and Q. However, if the ratio is unknown, the estimation of CN can be complicated, as these two parameters should be determined by solving the non-linear equation set. Obviously, there is no guarantee of deriving the optimal parameter set. Due to this reason, this study followed the step by step approach. The methodology for estimating CN by analyzing the rainfall–runoff data is summarized as in Figure 1. First, it is important to separate the direct runoff from the total runoff. Fortunately, the main stream of the Hancheon basin is mostly dry, even in the wet summer season. This is a general characteristic of the porous volcanic soil on Jeju Island. The runoff observed at the exit of the Hancheon basin could thus be assumed to be the direct runoff. Second, the initial abstraction is determined by following Woodward et al. [20]. That is, the initial abstraction is determined as the total precipitation amount from the beginning of the rainfall to the occurrence point of the direct runoff. Then the maximum potential retention is estimated by the following equation:
By substituting the initial abstraction estimated in the first step and the observed total precipitation and direct runoff into Equation (8), the maximum potential retention can be calculated. CN can also be calculated using the relation between the maximum potential retention and CN, as in Equation (5).

This study considers the Hancheon basin on Jeju Island, Korea (see Figure 2). Here, Hancheon is the name of the main channel of the Hancheon basin, which originates from Mount Halla, and runs to the seashore in Yongdam-dong. Hancheon is a dry river, which has runoff only during flooding. The upstream part of the basin is mostly forest, the middle stream area is farmland, and the downstream area is urban [4]. Hancheon riverbed is an eroded valley in the basaltic plateau, which has a deep rectangular cross-section, without any embankment. The Hancheon river at the exit of the basin is about 40 m wide and 7 m deep [48]. The area of the Hancheon basin is 32.88 km2; on the basis of the Second Dongsan Bridge, the channel length is 19.01 km, and the width of the basin is 1.75 km (i.e., the shape factor is 0.09) [13].
Figure 3 shows a picture and cross section of the Second Dongsan Bridge at the exit of the Hancheon basin. There is a surveillance video at the center of the Second Dongsan Bridge, whose image can be obtained from the home page of the Jeju Central Disaster and Safety Countermeasures Headquarters (https://www.jejusi.go.kr/bangjae/realcctv/river.do). An electromagnetic surface flowmeter is also placed at the center of this bridge, which measures both the flow velocity and the water stage every 10 min. The cross-section in Figure 3b was made using the survey data provided in the Master Plan for Local Rivers Management in Jeju-si and the preparation of river facility management [49].

This study used the 10 min rainfall data obtained from four AWS (Automatic Weather Station) rain gauges around the Hancheon basin (i.e., Jeju (gauge number 184), Sancheondan (329), Eorimok (753), Jindallaebat (870), and Witsaeorum (871)). The areal-average data were then made by applying the Thiessen polygon method. The weighting applied to each rain gauge was Eorimok 48.89%, Sancheondan 22.96%, Jindallaebat 8.64%, Witsaeorum 10.19%, and Jeju 9.32%, respectively.
This study selected a total of ten rainfall events that occurred from 2012 to 2019 (Table 1). As the infiltration capacity of the soil in Jeju Island was known to be very high, only the rainfall events with their total precipitation higher than 100 mm were selected. Several events with significant problems in their runoff records were excluded. Among these selected rainfall events, nine events were caused by typhoons, while the remaining event was convective. In particular, Typhoon Bolaven, which passed the south-western part of Jeju Island in August 2012, recorded a maximum wind velocity of 49.6 m/s at the Seogwipo meteorological station, and a maximum total rainfall of 740.5 mm at the Witsaeorum meteorological station [50]. Based on the areal-average rainfall, the rainfall event #5 recorded the largest total rainfall amount of 691.5 mm, and the rainfall event #3 the highest one-hour rainfall intensity of 76.8 mm/h. The antecedent five-day precipitation for rainfall event #4, which was 564.8 mm, was the highest. Figure 4 compares the rainfall histogram of the rainfall events considered in this study.
The runoff data used were based on the water stage and surface velocity data measured by the electromagnetic surface flowmeter. As the electromagnetic surface flowmeter measures the surface velocity, this should be converted to the cross-sectional average velocity. There have been many studies to determine the conversion factor, or a constant to be used for converting the surface velocity into the cross-sectional average [51,52,53]. A similar study was also done in Korea for several streams in Jeju Island including the Hancheon [54]. Their result shows that the conversion factor should be 0.48 when the flow depth is lower than 0.5 m, 0.48–0.85 when the flow depth is in between 0.5 and 1.5 m, and 0.85 when the flow depth is higher than 1.5 m. In this study, this conversion factor was used for estimating the cross-sectional average velocity.
Table 2 summarizes the basic characteristics of the runoff data for the ten rainfall events considered. In fact, some portion of the data was missing; in particular, the entire surface velocity data for rainfall event #5 was missing. The missing portions of the data were interpolated by the data observed before and after the missing point. The mean depths of the rainfall events #3 and #5 were rather deep at 1.34 m and 1.43 m, respectively. Rainfall event #8 showed rather high flow velocity of 4.19 m/s.

C.Y. conceived and designed the idea of this research and wrote the manuscript. M.K. collected the runoff data and rain gauge data and applied the SCS–CN method. All authors have read and agreed to the published version of the manuscript.

This work was supported by the National Research Foundation of Korea (NRF) grant funded by the Korea government (Ministry of Science and ICT, MSIT) (No. 2020R1A2C200871411). 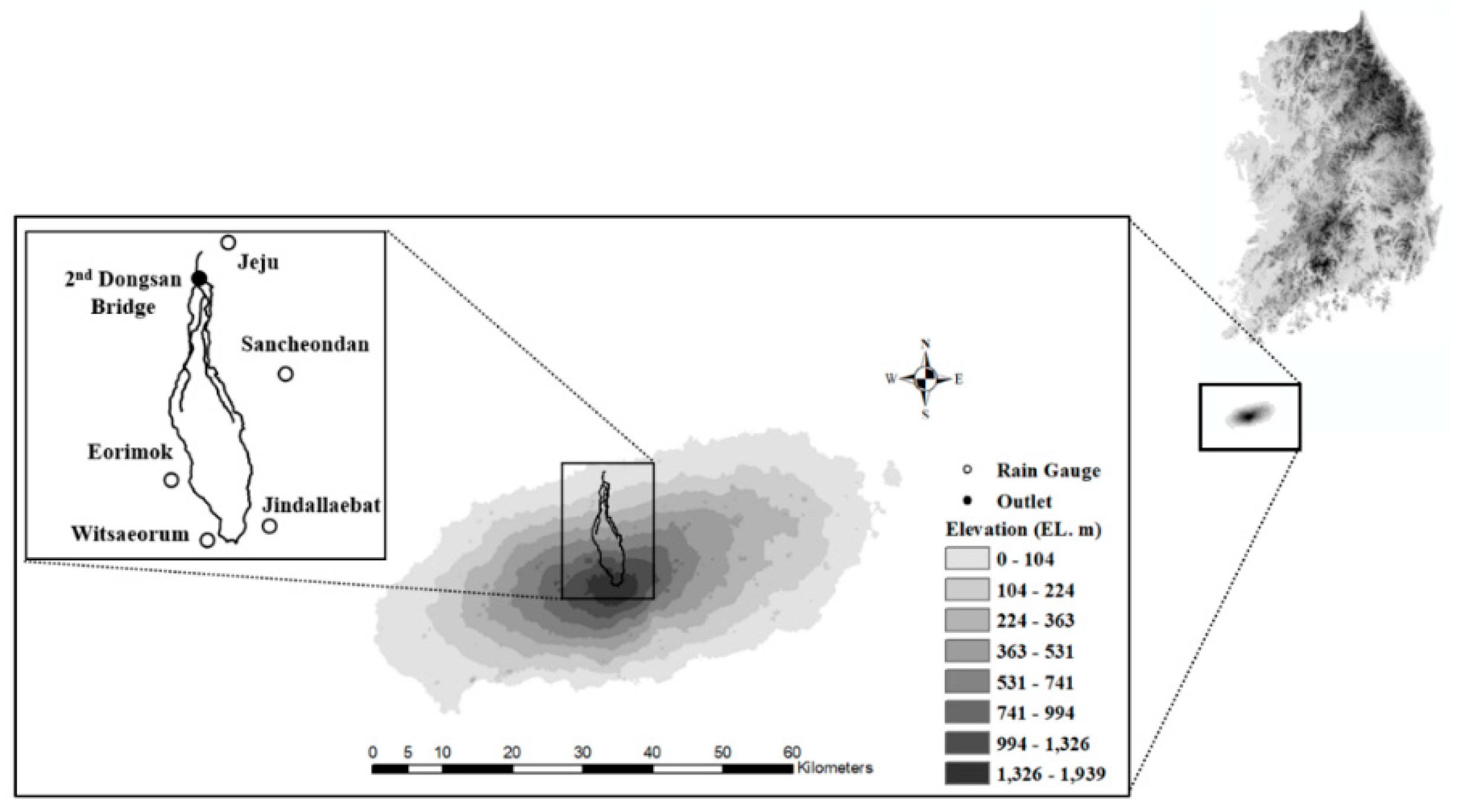 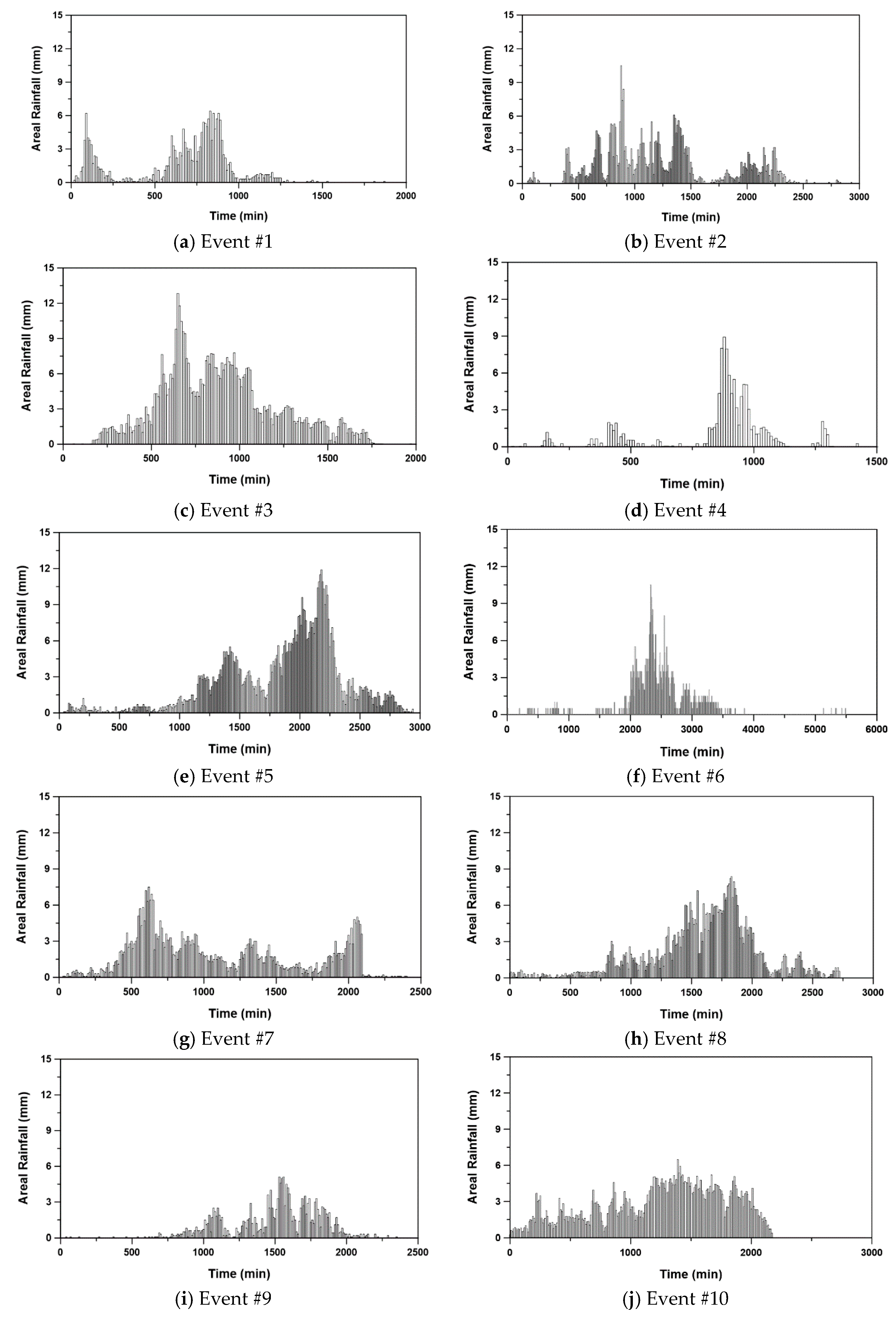 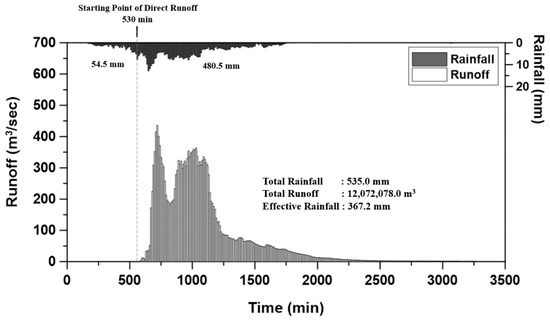 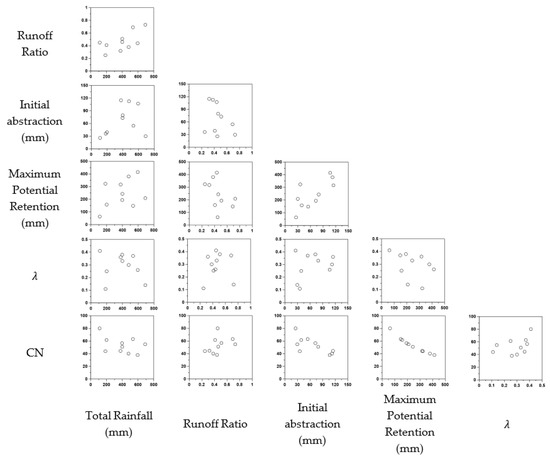 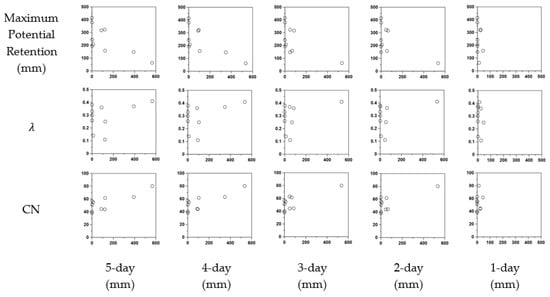