Sensitivity Analysis of the MOHID-Land Hydrological Model: A Case Study of the Ulla River Basin

Hydrological models are increasingly used for studying watershed behavior and its response to past and future events. The main objective of this study was to conduct a sensitivity analysis of the MOHID-Land model and identify the most relevant parameters/processes influencing river flow generation. MOHID-Land is a complex, physically based, three-dimensional model used for catchment-scale applications. A reference simulation was implemented in the Ulla River watershed, northwestern Spain. The sensitivity analysis focused on sixteen parameters/processes influencing water dynamics at that scale. River flow generation was influenced by the resolution of the simulation grid, soil water infiltration, and crop evapotranspiration. Baseflow was affected by soil hydraulic properties, the depth of the soil profile, and the dimensions of the river cross-sections. Peak flows were mostly constrained by Manning’s coefficient in the river network, as well as the dimensions of the river cross-sections. The MOHID-Land model was then used to simulate daily streamflow during a 10-year period (2008−2017). Model simulations were compared against measured data at four hydrometric stations characterizing the natural flow regime of the Ulla River, resulting in coefficients of determination (R2) from 0.56 to 0.85; ratios of the standard deviation of the root mean square error to observation (RSR) between 0.4 and 0.67, and Nash and Sutcliffe model efficiency (NSE) values ranging from 0.55 to 0.84. The MOHID-Land model thus has the capacity to reproduce watershed behavior at a daily scale with reliable accuracy, constituting a powerful tool to improve water governance at the watershed scale. View Full-Text
Keywords: MOHID-Land; physical model; sensitivity analysis; calibration; validation; river flow MOHID-Land; physical model; sensitivity analysis; calibration; validation; river flow
►▼ Show Figures 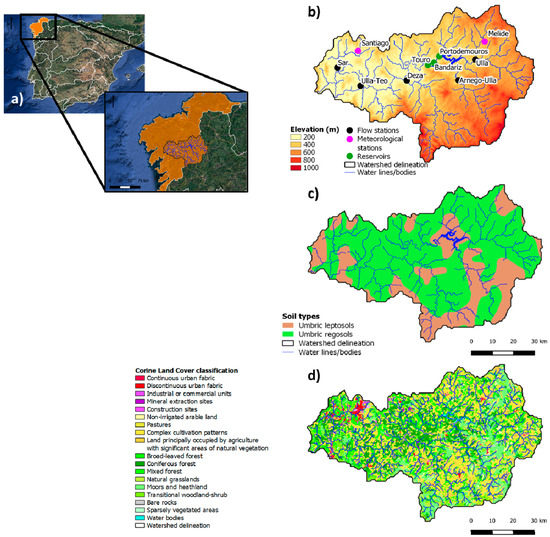