Comparison of Manganese Dioxide and Permanganate as Amendments with Persulfate for Aqueous 1,4-Dioxane Oxidation

Understanding the main drivers of runoff availability has important implications for water-limited inland basins, where snow and ice melt provide essential input to the surface runoff. This paper presents an analysis on the runoff response to changes in climatic and other controls of water-energy balance in an inland glacierized basin, the Urumqi River basin, located in the arid region of northwest China, and identifies the major control to which runoff is sensitive across the basin’s heterogeneous subzones. The results indicate that the runoff is more sensitive to change in precipitation in the mountainous headwaters zone of the upper reach, and followed by the impact of basin characteristics. In contrast, the runoff is more sensitive to changes in the basin characteristics in the semiarid and arid zones of the mid and lower reaches. In addition, the change in basin characteristics might be represented by the distinct glacier recession in the mountainous upper reach zone and the increasing human interferences, i.e., changes in land surface condition and population growth, across the mid and lower reach zones. The glacier wasting contributed around 7% on average to the annual runoff between 1960 and 2012, with an augmentation beginning in the mid-1990s. Findings of this study might help to better understand the possible triggers of streamflow fluctuation and the magnitude of glacier wasting contribution to runoff in inland glacierized river basins. View Full-Text
Keywords: runoff; climatic factors; basin characteristics; glacier; the Urumqi River; Budyko framework runoff; climatic factors; basin characteristics; glacier; the Urumqi River; Budyko framework
►▼ Show Figures 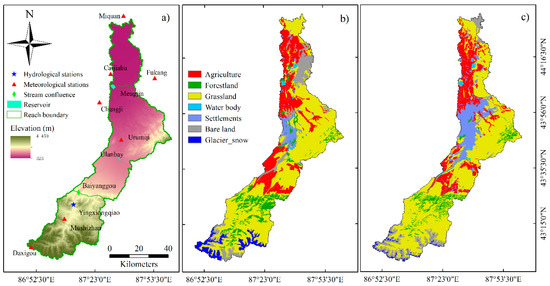