In the Prairie provinces of Alberta, Saskatchewan, and Manitoba, agricultural production depends on winter and spring precipitation. There is large interannual variability related to the teleconnection between the regional hydroclimate and El Niño and La Niña in the Tropical Pacific. A modeling experiment was conducted to simulate climatic and hydrological parameters in the Canadian Prairie region during strong El Niño and La Niña events of the last decade in 2015–2016 and 2010–2011, respectively. The National Center for Atmospheric Research (NCAR) Weather Research and Forecasting (WRF) model was employed to perform two sets of sensitivity experiments with a nested domain at 10 km resolution using the European Centre for Medium-Range Weather Forecasts Reanalysis (ERA) interim data as the lateral boundary forcing. Analysis of the hourly model output provides a detailed simulation of the drier winter, with less soil moisture in the following spring, during the 2015–2016 El Niño and a wet winter during the La Niña of 2010–2011. The high-resolution WRF simulation of these recent weather events agrees well with observations from weather stations and water gauges. Therefore, we were able to take advantage of the WRF model to simulate recent weather with high spatial and temporal resolution and thus study the changes in hydrometeorological parameters across the Prairie during the two extreme hydrological events of the last decade. View Full-Text
Keywords: Canadian Prairie climate; ENSO; downscaling; WRF Canadian Prairie climate; ENSO; downscaling; WRF
►▼ Show Figures 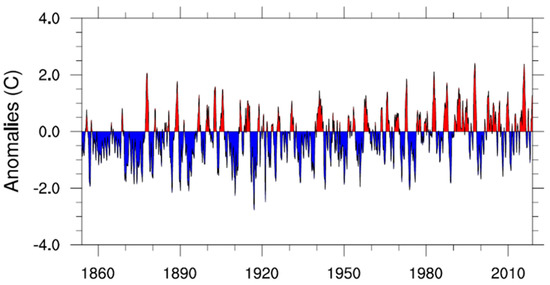