Impact of Climate Change on the Frequency of Dynamic Breakup Events and on the Risk of Ice-Jam Floods in Quebec, Canada
Next Article in Special Issue

A Detailed Assessment of Groundwater Quality in the Kabul Basin, Afghanistan, and Suitability for Future Development

Storm Data is a database maintained by the National Climatic Data Center (NCDC). It includes monthly reports detailing the impacts of severe weather events. The National Weather Service (NWS) started releasing the predecessor of Storm Data, Climatological Data in 1950. In its early years, the database only collected data on tornadoes and their impacts. Information on thunderstorms and their impact was added after 1955. The name Storm Data was officially used later in 1959 when data of all severe weather events were added into the database. Emergency management officials, media, insurance companies, and law enforcement are the main sources of data included in Storm Data [31]. The database includes different classes of circumstances/location of the deaths or injuries (mostly at a county level), defines the timing of the event by the segment of the day (morning, afternoon, night, etc.), age and gender of victims, and for vehicle-related fatalities, the database includes information about the road type in some cases.
For this study, the data of vehicle-related flood fatalities, which was attributed to coastal floods, flash floods, floods, heavy rain, and tropical storms, was collected from the Storm Data website for Texas for 1959 to 2019. Fatality data before 1996 was available only as PDF files. In total, 444 Storm Data reports in PDF format were reviewed (1959–1995). Rainfall data was obtained from the National Centers for Environmental Information (NCEI) of the National oceanic and Atmospheric Administration [32]. Texas flood fatality data was downloaded for each year and then combined. In-house R scripts were developed to extract data needed for the analysis. R scripts were used to run Mann-Kendall nonparametric trend analysis. Excel was used to perform analysis of variance (ANOVA) to compare variables such as gender. R scripts were used to process rainfall data and compare rain and fatality data.

Among all the 570 vehicle-related flood fatalities during the study period, 416 (73%) were recorded with the time of the day they occurred. The timing of some storm/flooding events was described by the starting and ending hours. However, there is not enough detail regarding the storm movement and exact time of fatality. The time of occurrence is described as morning, noon, afternoon, evening, and night, without a specific description of the hour. Most likely these time periods correspond to 5:00 am–before noon (morning), around 12:00 pm (noon), noon to 5:00 pm (afternoon), 5:00 to 9:00 pm (evening), and 9:00 pm to 5:00 am (night). A large number of these vehicle-related flood fatalities with temporal details recorded (more than 45%) occurred at night (Figure 6) and 31% occurred in the morning, including the dark early morning hours. Sharif et al. [28] found that a higher percentage (52%) of flood fatalities, with occurrence circumstances recorded, happened at night in Texas. The percentages are significantly lower for the afternoon and evening periods. Ahmed et al. [33] found that the total percentage of vehicle-related flood fatalities that occurred in both the evening and at night accounted for 50% of those with known time details, while the morning hours accounted for only 8%.

3.4. Demographics of the Victims

Gender information was reported for 483 (85%) of the vehicle-related flood fatalities in Storm Data. Males are almost twice as likely to die in vehicle-related flood accidents than females (63% to 37%), as seen in Figure 7. ANOVA test results showed that there was a difference between males and female, with p-values of less than 0.01. Although high, this male overrepresentation is lower than the 70% value reported by Jonkman and kelman [10] and the 85% reported by Coates [24]. In Texas, Sharif et al. [28] reported that male flood fatalities accounted for 68.4% of all fatalities. Kellar and Schmidlin [23] found that 60% of all vehicle-related flood deaths that were recorded with gender information were male victims. Ahmed et al. (2018) reported that 66% of all the vehicle-related flood deaths were males [27]. They found that when the role of the victims in the vehicle was specified as driver or passenger, male victims accounted for 72% of all the driver victims and 57% of all the passenger victims [33]. Diakakis’ [34] study reported a male-female ratio of 3.6 to 1. Unfortunately, Storm Data does not specify the driver in the vast majority of the incidents, but males are always more likely to be involved in risky behavior than females (e.g., [35]). Moreover, the presence of females in the vehicle, whether as a driver or passenger, was correlated with significantly lower accident risk [36]. Chen et al. [37] demonstrated that the presence of a male as a driver or passenger in a vehicle almost doubles the likelihood/severity of an accident.
Storm Data provided information on the ages of individuals involved in 382 (67%) of the vehicle-related flood fatalities. The age group of 20–29 years covers the most vehicle-related flood fatalities for both male victims (42) and female (25), as seen in Figure 8. The age group of 80 and above is the group that has the lowest male (14) and female fatalities (8). Male victims are significantly more involved than females among all the age groups, except the 10–19 age group. For the age group of 40–49 and 70–79, the numbers of male victims are more than twice that of females. In general, victims of flood incidents characterized by active behaviors were, on average, younger by a significant margin than the ones that perish exhibiting a passive behavior [34].

Information on the locations where vehicle-related flood deaths occurred was reported in Storm Data. These fatality locations have been classified into 10 categories (Table 3). The details on the exact locations were obtained from the part “Event Narrative” in Storm Data, which describes the fatal incidents when “driving on a flooded bridge”, “driving on a flooded highway”, “crossing river”, “crossing creek”, “driving over a culvert”, “inside vehicle”, or other places. The uses of these categories are not precise and not consistent among events and it seems that they are not mutually exclusive. Moreover, location details were reported for only 234 (41%) of the vehicle-related flood fatalities. About 30.8% of the vehicle-related fatalities occurred on a road and 23.5% occurred when driving through a flooded creek. “Event Narrative” mentioned that 13.2% died inside their vehicles, which may include those who died inside their vehicles that were swept away from roads or creeks. Storm Data specifically mentions occurrence at low-water crossings for only 8.5% of the vehicle-related fatalities. However, the authors suspect that almost all of the fatalities that occurred on creeks, according to “Event Narrative”, and most of those that occurred on the road, or described as “in vehicle” or “other”, actually occurred at low-water crossings where a road meets a creek. Thus, we suspect that over 80% of the fatalities occurred at low-water crossings where floodwater moves deep and fast enough to sweep away a vehicle. About 50% of the vehicle-related flood deaths described in the study by Kellar and Schmidlin [23] occurred where the road crosses a water course (in the presence or absence of a bridge). Ahmed et al. (2018) reported similar numbers [33].

H.O.S. guided this research, contributed significantly to preparing the manuscript for publication, and developed the research methodology. Z.H. processed the data and conducted the analysis. Z.H. prepared the first draft. H.O.S. performed the final overall proofreading of the manuscript. All authors have read and agreed to the published version of the manuscript.

The first author was funded through a scholarship from the Chinese Scholarship Council (No. 201606300024). 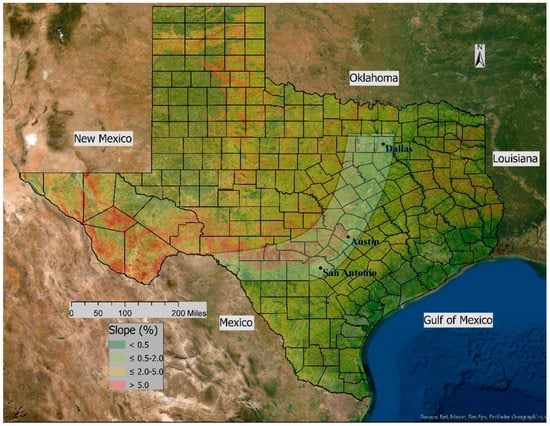 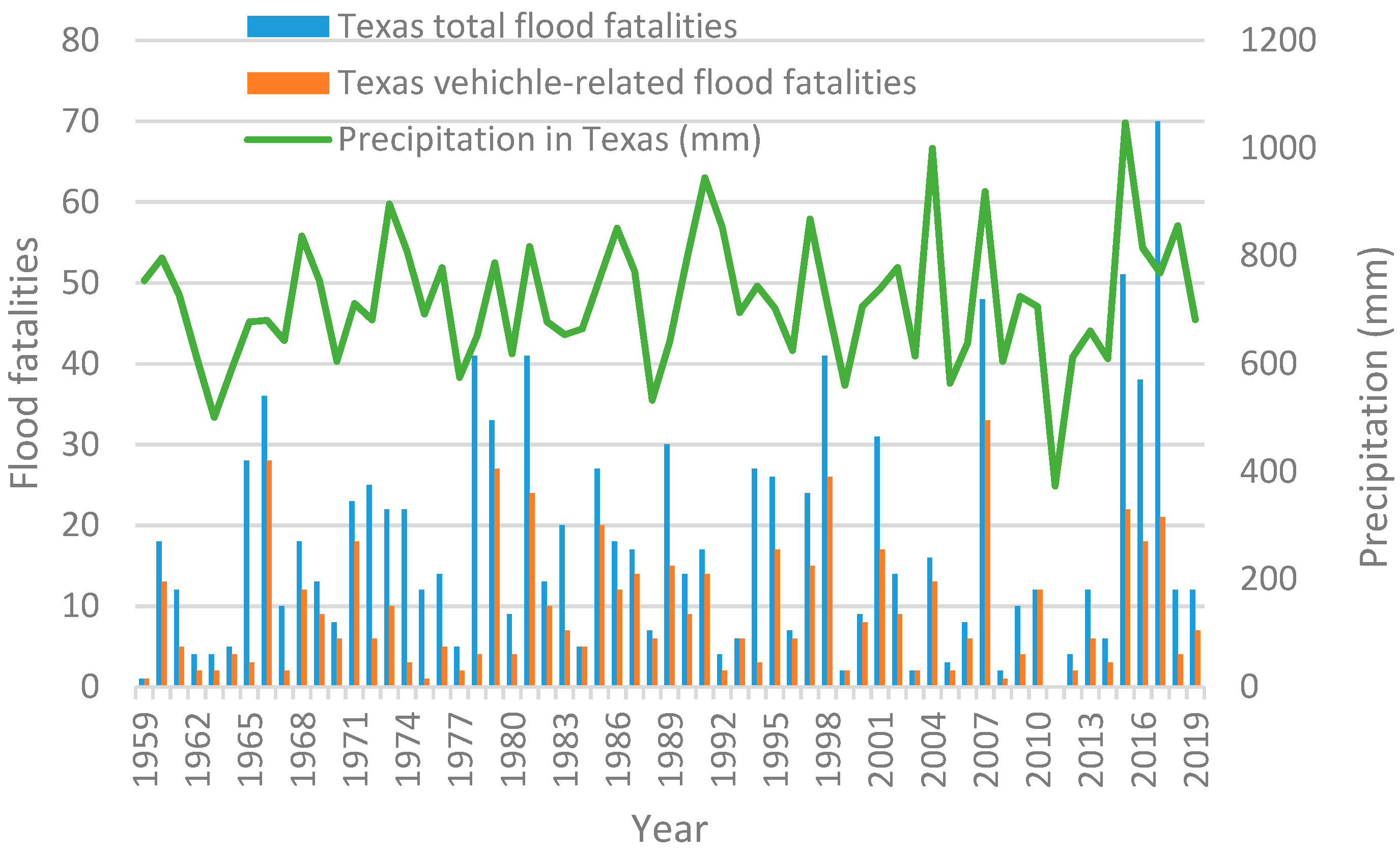 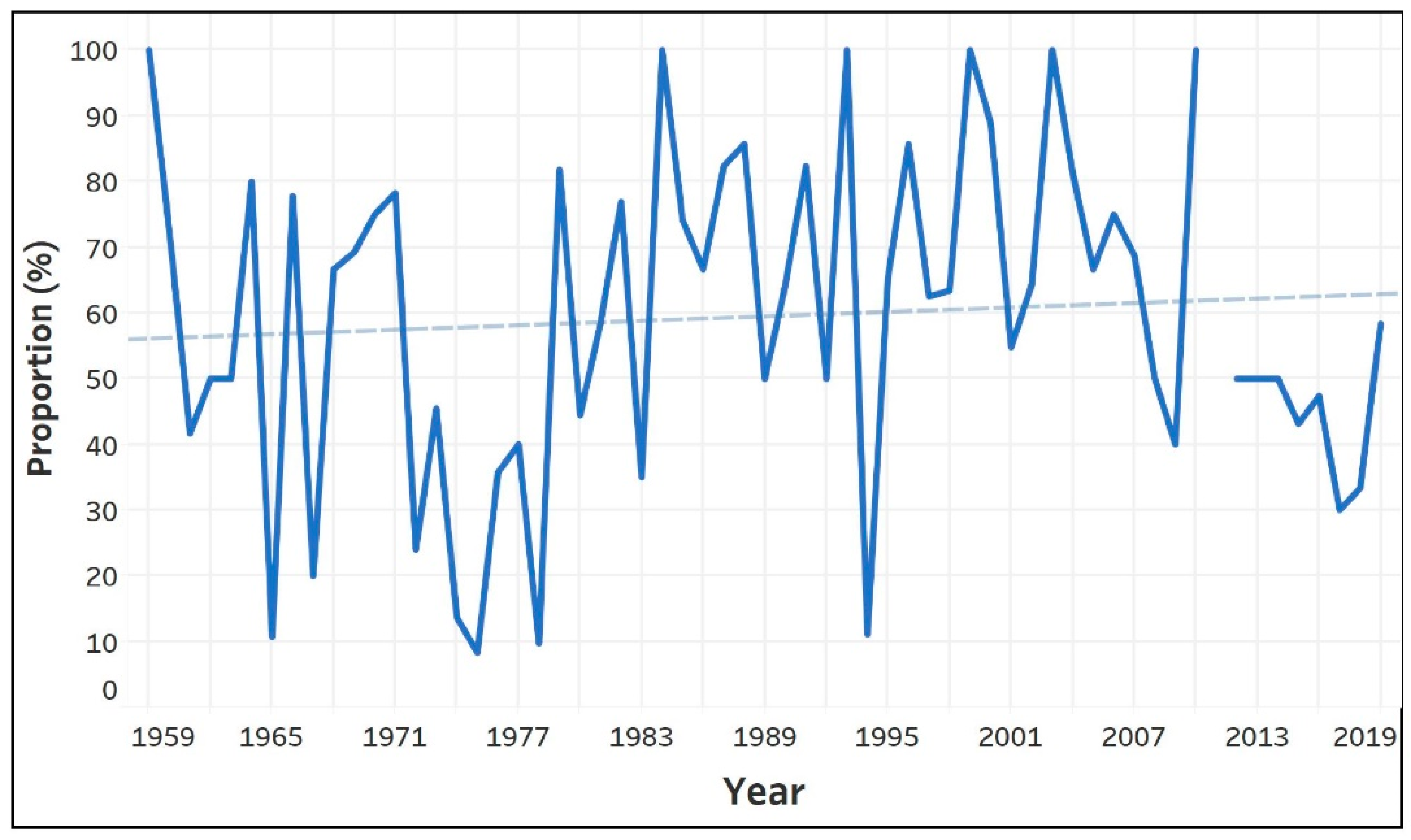 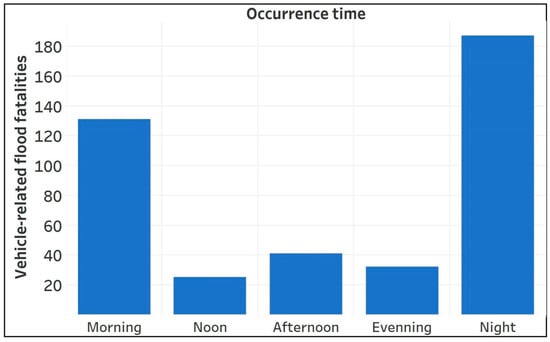 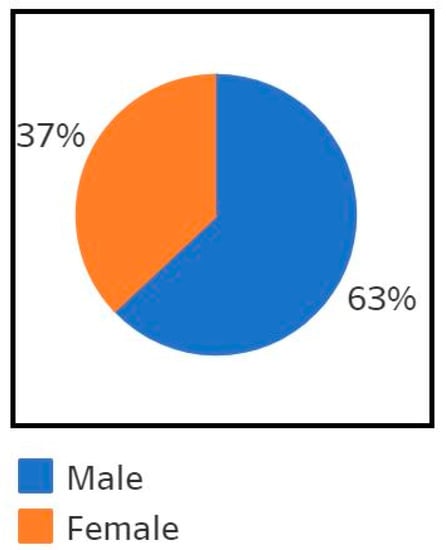 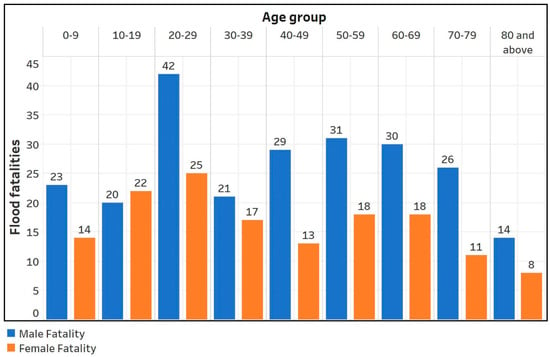 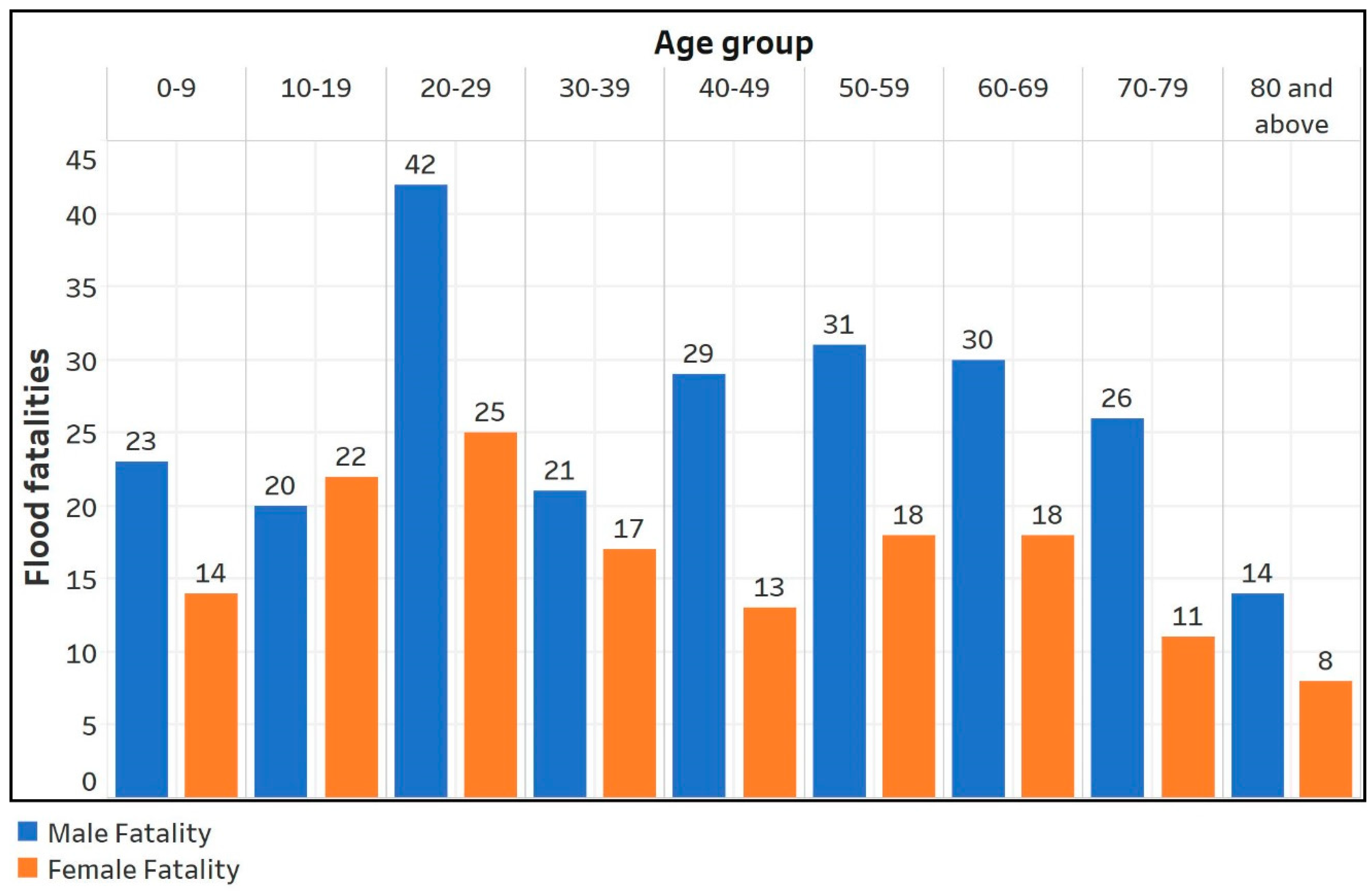 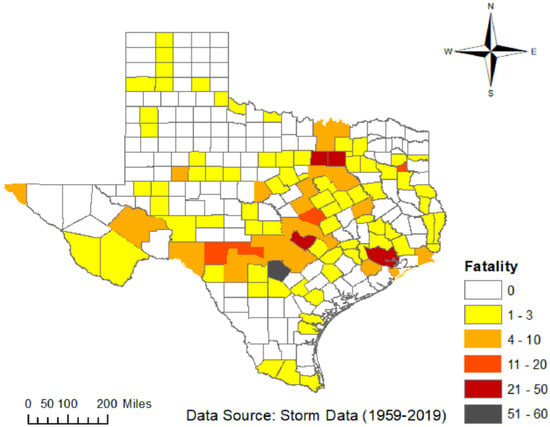 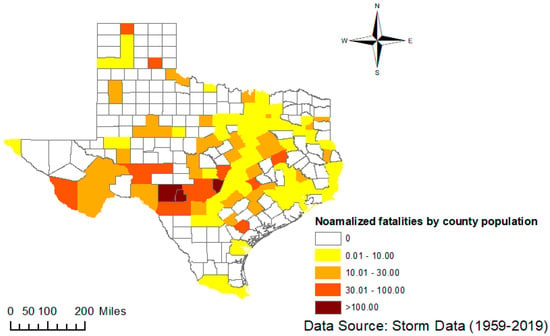