Sustainable Intensification of Agriculture in the Context of the COVID-19 Pandemic: Prospects for the Future
Previous Article in Special Issue

Water Balance for a Tropical Lake in the Volcanic Highlands: Lake Tana, Ethiopia

Lakes hold most of the freshwater resources in the world. Safeguarding these in a changing environment is a major challenge. The 3000 km2 Lake Tana in the headwaters of the Blue Nile in Ethiopia is one of these lakes. It is situated in a zone destined for rapid development including hydropower and irrigation. Future lake management requires detailed knowledge of the water balance of Lake Tana. Since previous water balances varied greatly this paper takes a fresh look by calculating the inflow and losses of the lake. To improve the accuracy of the amount of precipitation falling on the lake, two new rainfall stations were installed in 2013. The Climate Hazards Group Infrared Precipitation Version two (CHIRPS-v2) dataset was used to extend the data. After reviewing all the previous studies and together with our measurements, it was found that the period of 1990–1995 likely had the most accurate gauged discharge data. During some months in this period, the lake water balance was negative. Since the river inflow to the lake cannot be negative, water was either lost from the lake via the subsurface through faults, or the outflow measurements were systematically underestimated. Based on the evaporation rate of 1650 mm, we found that unaccounted loss was 0.6 km3 a−1, equivalent to 20 cm of water over the lake area each year. This implies the need for reliable rainfall data and improved river discharge measurements over a greater portion of the basin both entering and exiting the lake. Also, integrated hydrological and geologic investigations are needed for a better understanding of the unaccounted water losses and quantifying the amount of subsurface flow leaving the lake. View Full-Text
Keywords: water balance; Blue Nile; lake rainfall; CHIRPS; ungauged basins; runoff water balance; Blue Nile; lake rainfall; CHIRPS; ungauged basins; runoff
►▼ Show Figures 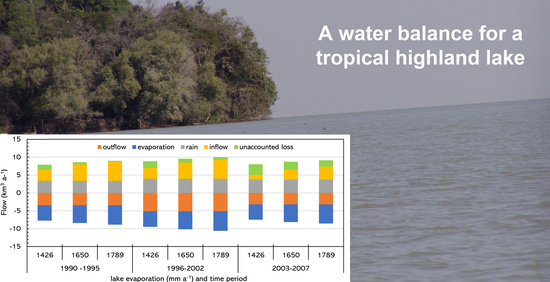