Approaches to Multi-Objective Optimization and Assessment of Green Infrastructure and Their Multi-Functional Effectiveness: A Review
Previous Article in Special Issue

With the increase in global urbanization, satellite imagery and other types of geospatial data have been extensively used in urban landscape change research, which includes environmental modeling in order to assess the change impact on urban watersheds. For urban hydrological modeling, as a focus of this study, several related research questions are raised: (1) How sensitive are runoff simulation to land use and land cover change patterning? (2) How will input data quality impact the simulation outcome? (3) How effective is integrating and synthesizing various forms of geospatial data for runoff modeling? These issues were not fully or adequately addressed in previous related studies. With the aim of answering these questions as research objectives, we conducted a spatial land use and land cover (LULC) change analysis and an urban runoff simulation in the Blue River watershed in the Kansas City metropolitan area between 2003 and 2017. In this study, approaches were developed to incorporate the Hydrologic Engineering Center Hydrologic Modeling System (HEC-HMS) model with remote sensing, geographic information systems (GIS), and radar rainfall data. The impact of data quality on the model simulation outcome was also analyzed. The results indicate that there are no significant differences between simulated runoff responses in the two study years (2003 and 2017) due to spatial and temporal heterogeneity of urbanization processes in the region. While the metropolitan area has been experiencing remarkable urban development in the past few decades, the gain in built-up land in the study watershed during the study period is insignificant. On the other hand, the gain in vegetated land caused by forestation activities is offset by a decrease in farmland and grassland. The results show that increasing spatial data resolution does not necessarily or noticeably improve the HEC-HMS model performance or outcomes. Under these conditions, using Next Generation Weather Radar (NEXRAD) rainfall data in the simulation provides a satisfactory fit in hydrographs’ shapes, peak discharge amounts and time after calibration efforts, while they may overestimate the amount of rainfall as compared with gauge data. This study shows that the developed approach of synthesizing satellite, GIS, and radar rainfall data in hydrological modeling is effective and useful for incorporating urban landscape and precipitation change data in dynamic flood risk assessment at a watershed level. View Full-Text
Keywords: urban runoff modeling; HEC-HMS; LULC; DEM; data resolution; NEXRAD rainfall urban runoff modeling; HEC-HMS; LULC; DEM; data resolution; NEXRAD rainfall
►▼ Show Figures 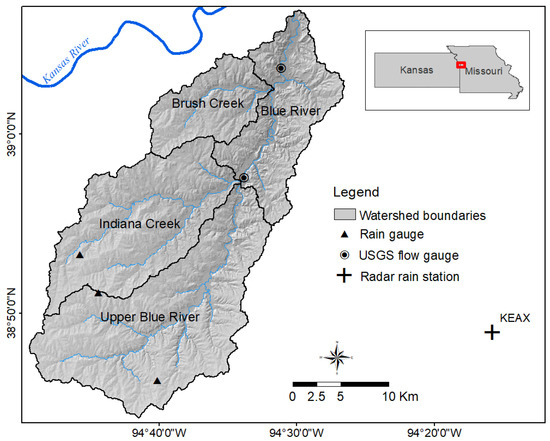